VUELTA’22 Stage 2: Bennett Bounces Back for the Win!

Vuelta Stage 2 Report: At the end of a chaotic bunch sprint in Utrecht, Ireland’s Sam Bennett of BORA-hansgrohe showed his sprinting talent of past years. The top sprinters of the 2022 Vuelta a España battled it out to the line with Bennett first across the line followed by Mads Pedersen (Trek-Segafredo) and Tim Merlier (Alpecin-Deceuninck). Mike Teunissen took the overall leaders red jersey.

The second stage of the Vuelta a España was won by Sam Bennett. The Irishman was the fastest in the bunch sprint to take his fourth Vuelta stage win. Mike Teunissen finished fourth and took the overall lead from Robert Gesink. 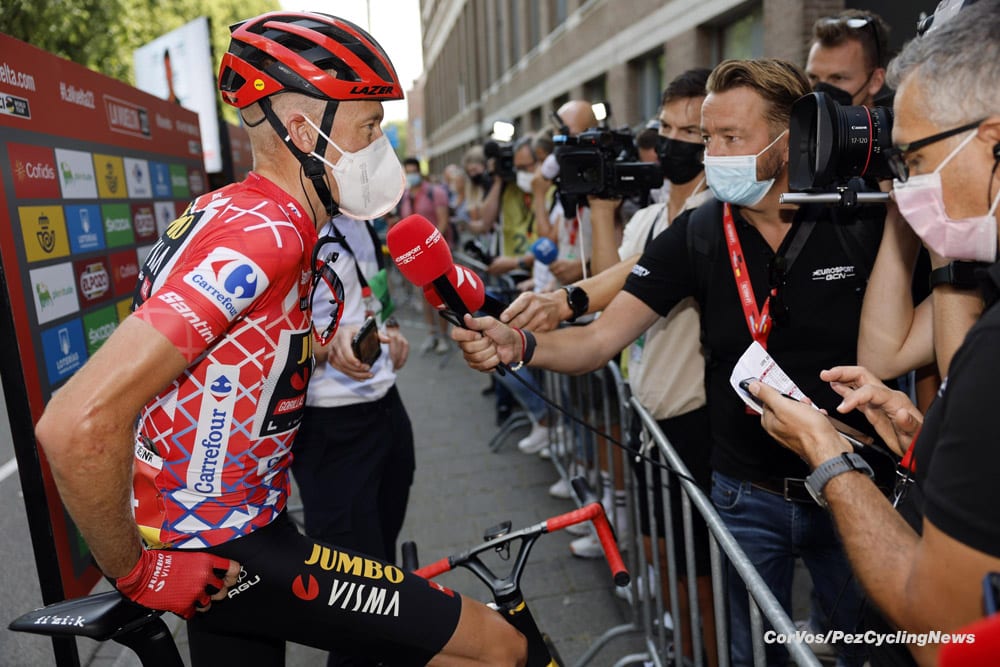 Robert Gesink popular with the Dutch media at the start

Fernando Escartín: “A primarily flat stage. The only obstacle on the day will be a 3rd category climb that will determine the first riders to fight for the mountain jersey. Victory will be decided in a sprint to the finish-line. The proximity to the sea could provoke strong winds and add to the stage’s unpredictability.”

After Friday’s opening team time trial, the Vuelta a España continued on Saturday with a 175 kilometre stage from Den Bosch to Utrecht with one ‘mountain climb’ on the route. After well over a hundred kilometres, the riders had to climb the Amerongse Berg (2.1km at 2.4%). Then via the Soesterberg Air Base, where the intermediate sprint of the day was, to the final circuit in Utrecht. The finish line was at the Utrecht Science Park, on the east side of the city. A bunch sprint was expected. 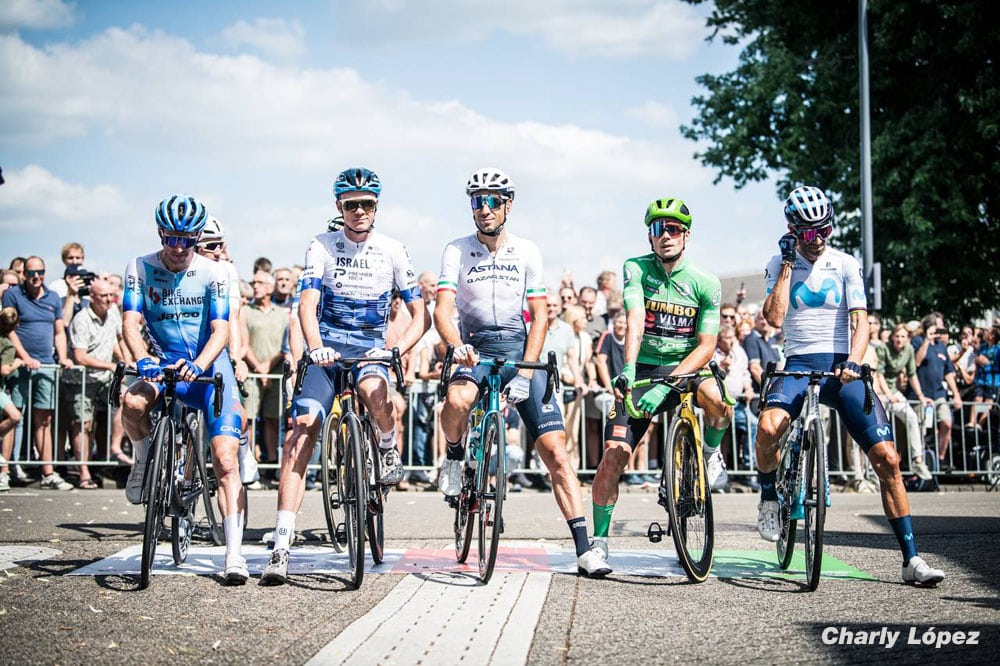 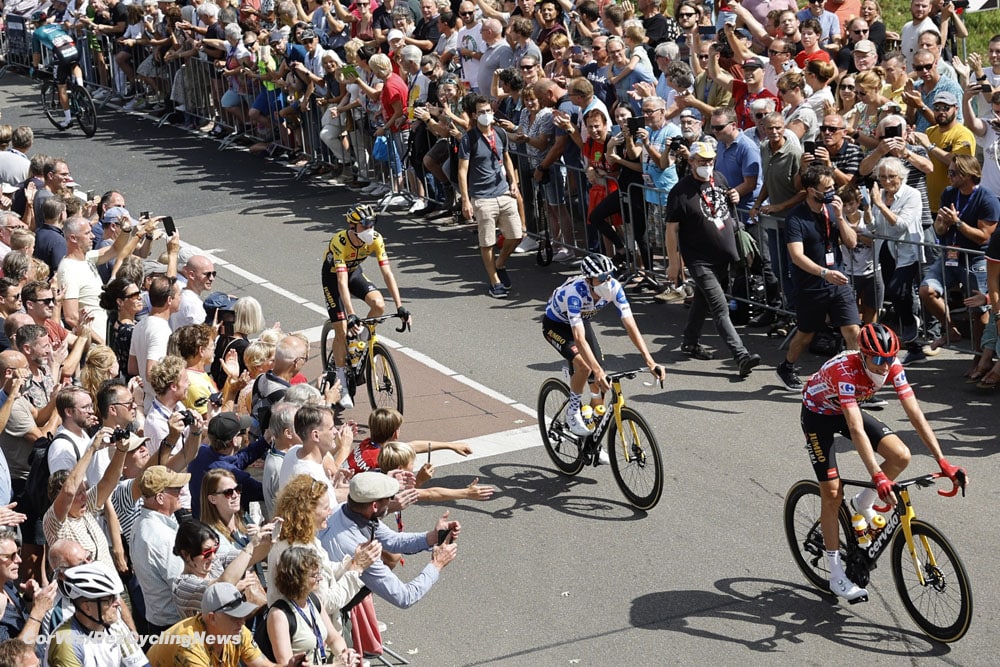 Jumbo-Visma had all the classification jerseys at the start, how many at the finish?

With Robert Gesink in the red leader’s jersey, the peloton left Den Bosch for the 175 kilometres back to Utrecht. Two kilometres after the official start, the break of the day had already gone with Julius van den Berg (EF Education-EasyPost), Jetse Bol (Burgos-BH), Xabier Mikel Azparren (Euskaltel-Euskadi), Pau Miquel (Equipo Kern Pharma) and Thibault Guernalec (Arkéa-Samsic). When the gap was 5 minutes, Alpecin-Fenix ​​started to chase. They had the big favourite for the stage win: Tim Merlier. 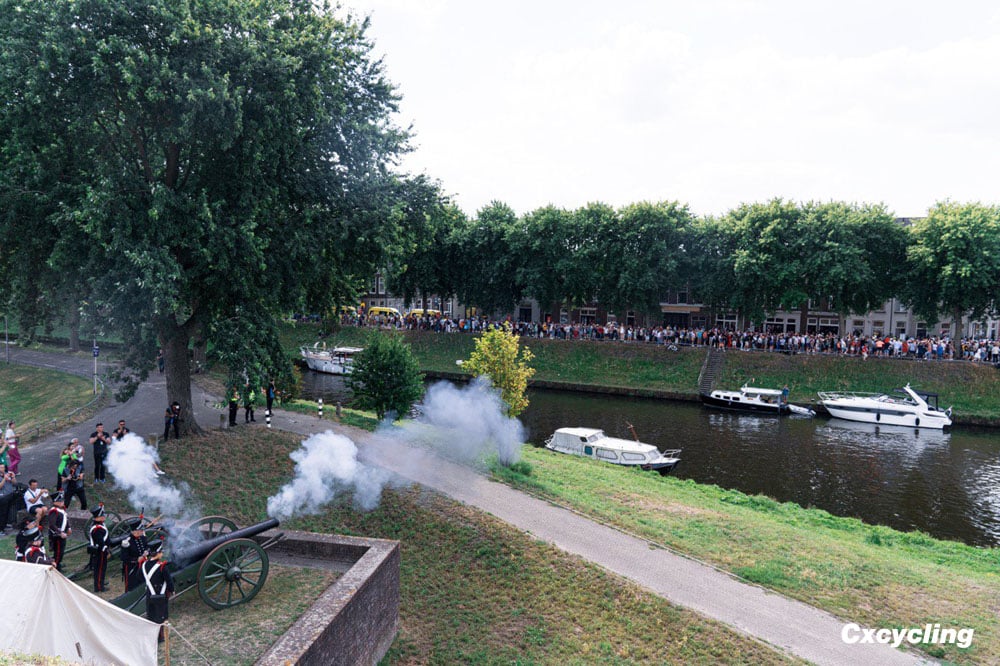 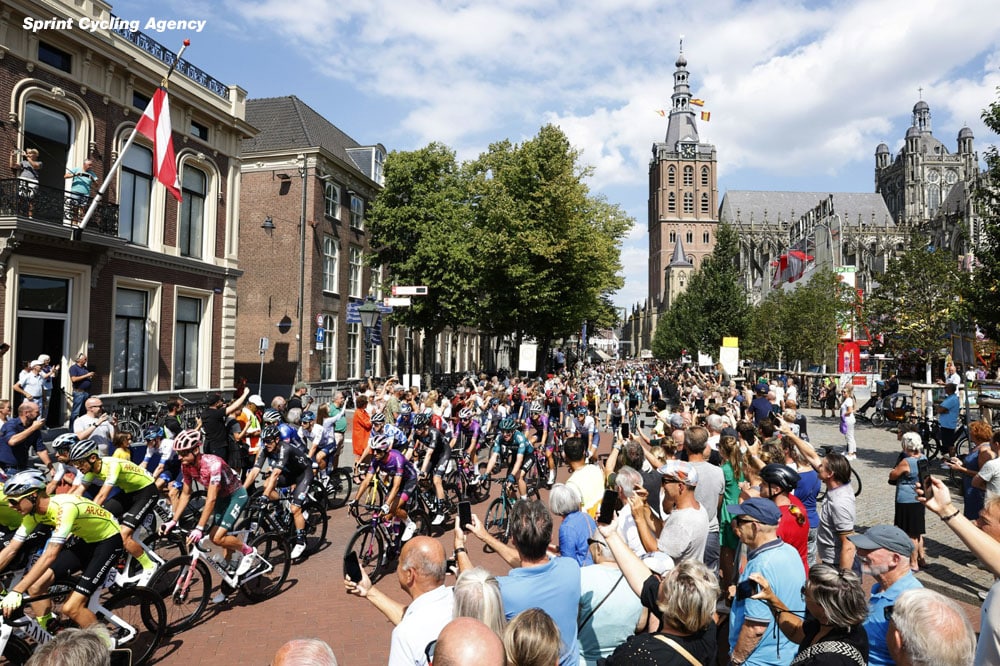 A day for the sprinters?

The work of the Belgian team reduced the lead to 2 minutes. With about 120 kilometres to go, Alpecin-Deceuninck put the hammer down again. The peloton was pulled into a long line and the gap to the escape narrowed quickly. At one point the five had about 100 metres. However, catching the break turned out not to be the intention, because little by little they increased their lead again. 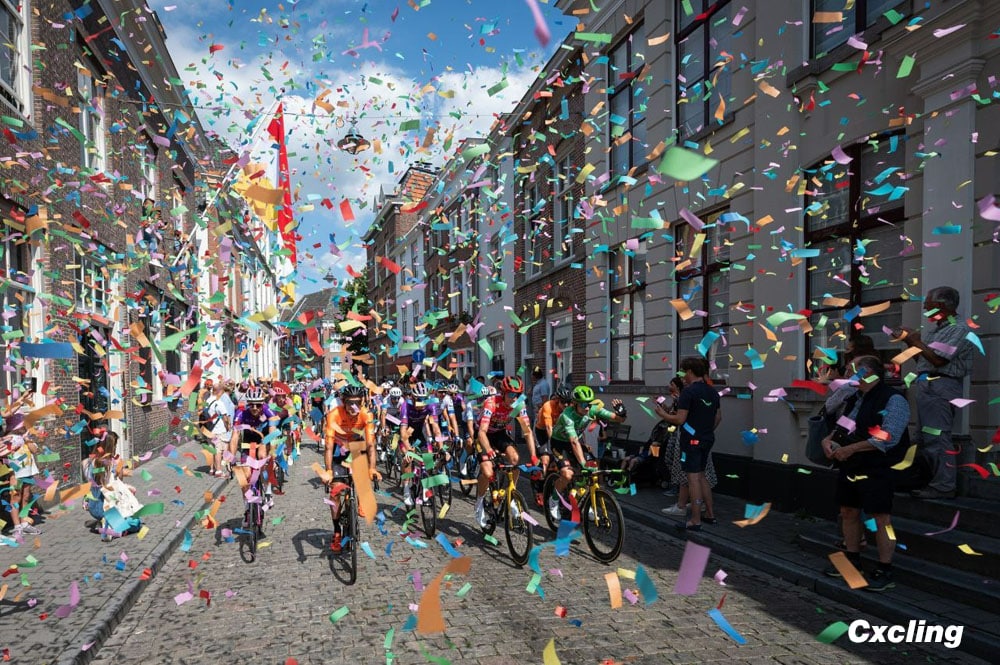 The street cleaners will be busy today 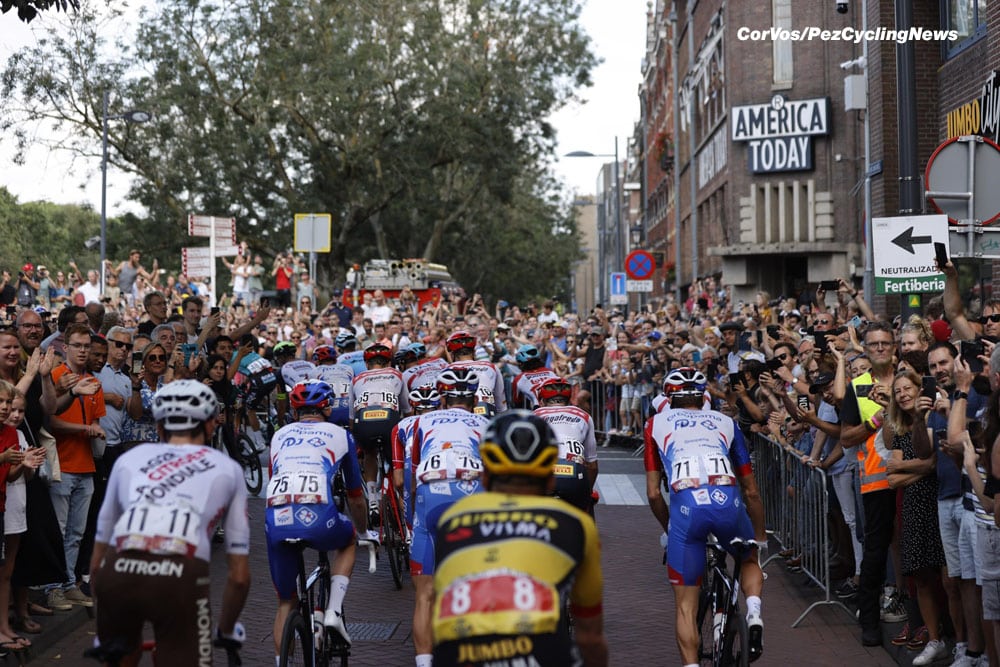 The five would compete for the only mountain point of the day, and the mountain jersey that went with it on the Amerongse Berg, which was called the Alto de Amerongse for this Spanish occasion. Thibault Guernalec didn’t wait for the climb and attacked a few kilometres before the bottom. 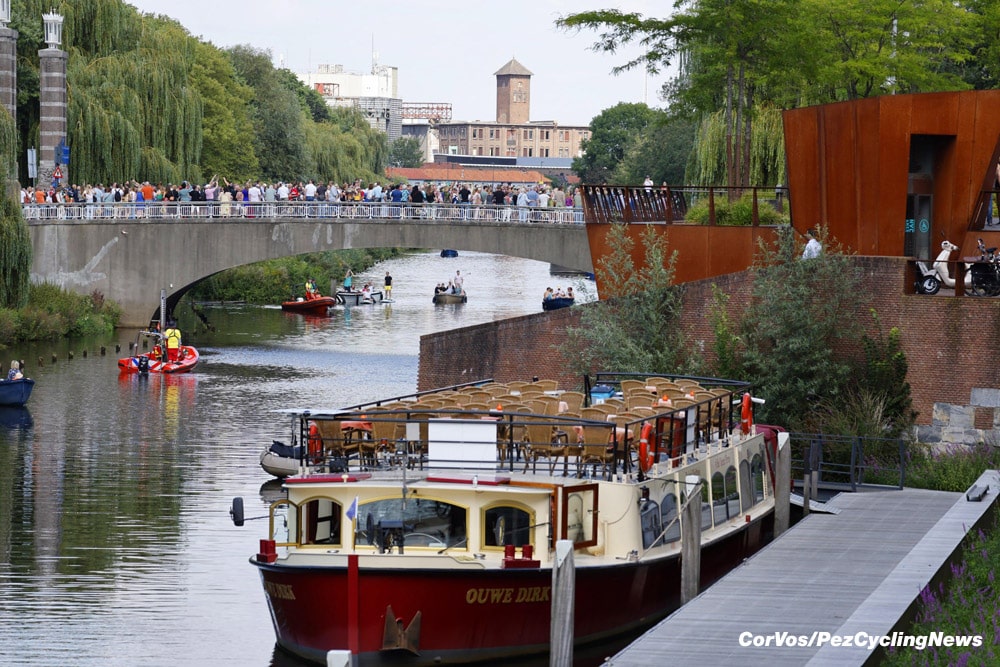 One of the many canals in the area 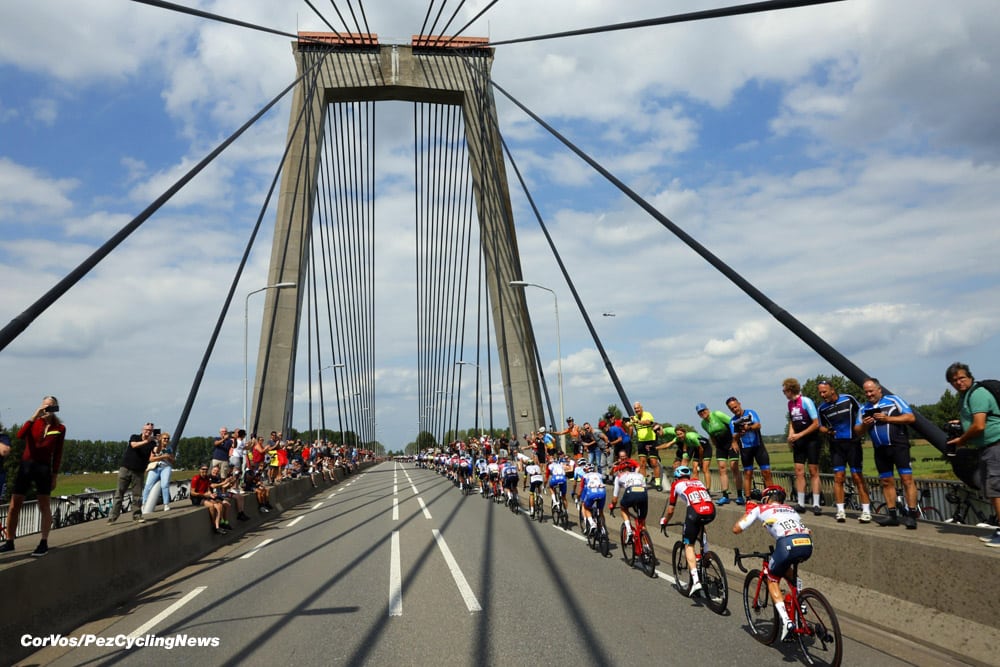 The peloton didn’t give the break an easy time 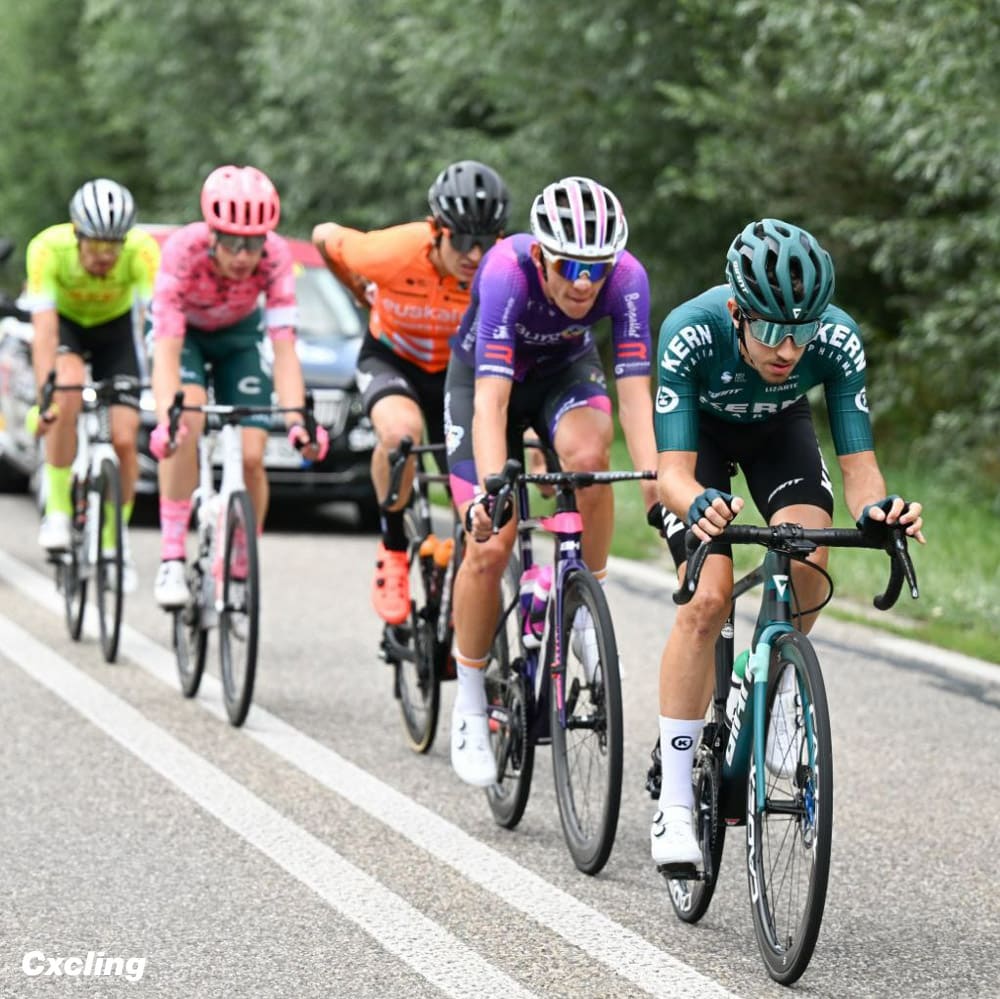 The break’s advantage fluctuated all day 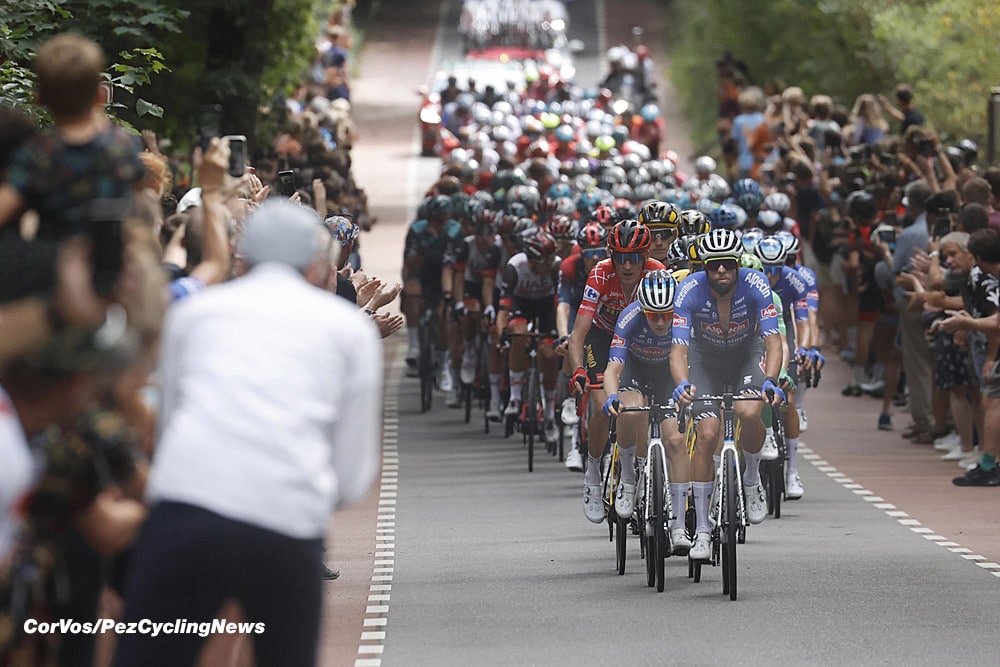 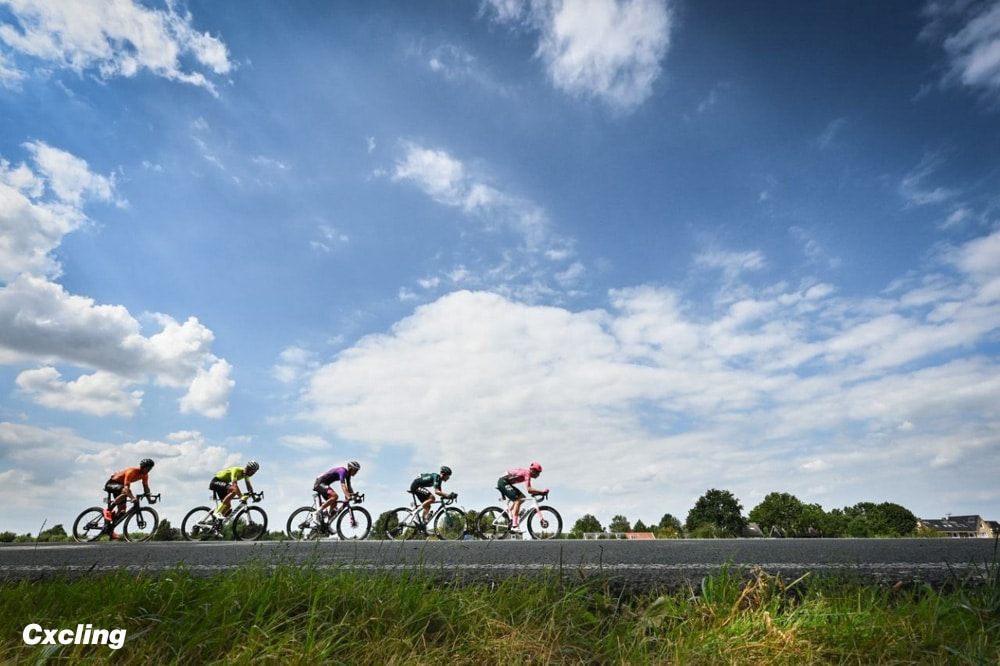 The break started to split on the ‘climb’ of the day 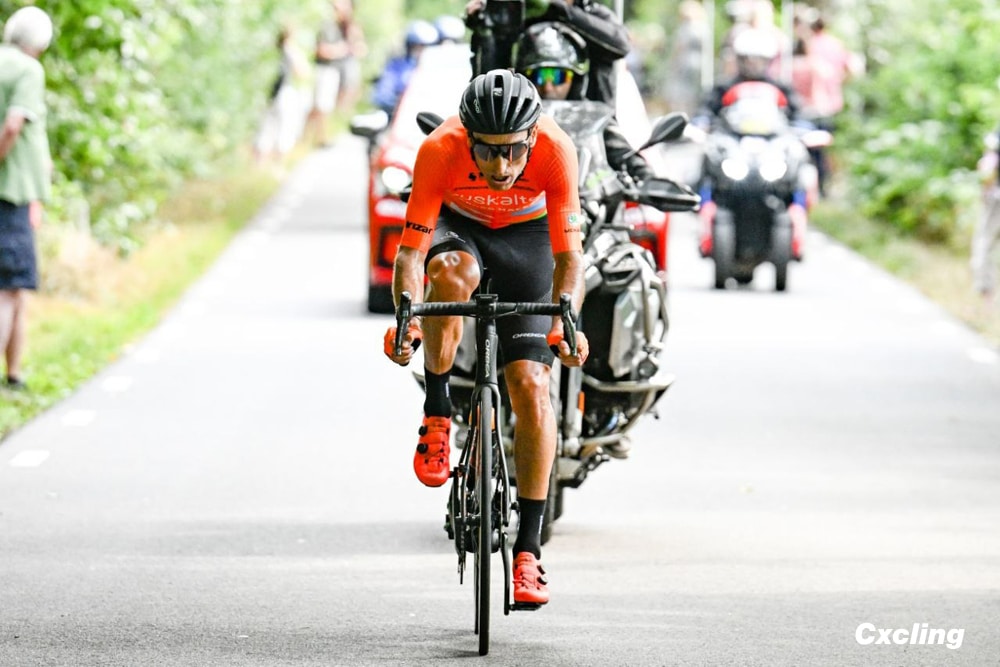 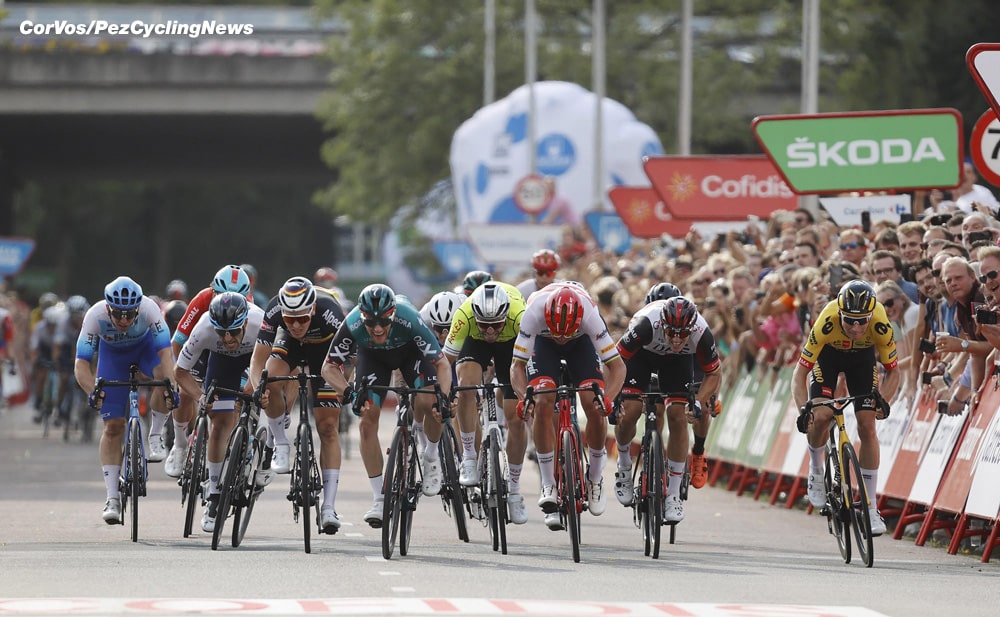 Bennett was given the perfect lead-out from his team

Stage winner, Sam Bennett (BORA-hansgrohe): “At the beginning, Danny [van Poppel] brought me up with speed and then I waited for a second and my speed dropped. I was a bit nervous that I wouldn’t get on top of the speed again, but in the end we came from behind. Danny launched me and it’s down to the boys today. They did a fantastic job to bring me to the line with great legs. In the moment, it’s just racing. I was more worried about holding on than I was actually worried about passing people. It’s nice [to win again in a Grand Tour]. I knew I’d do it again, it was just a matter of getting the right legs. What I’m really happy about is continuing my pattern of winning at least a stage in each Grand Tour since 2018. I’m quite happy to lead the points standings. I’m quite happy with my level but I think experience and the guys made a difference today. There might be another sprint tomorrow. We’ll go in with the same hunger again.” 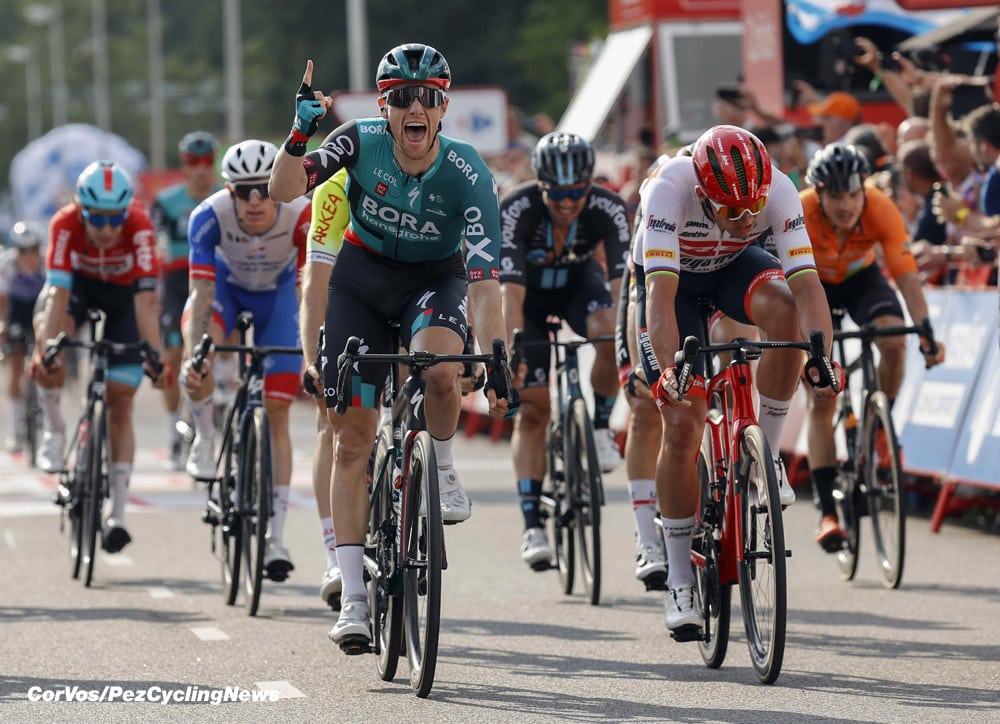 Is this the return of Sam Bennett?

Overall leader and 4th on the stage, Mike Teunissen (Jumbo-Visma): “Actually, it wasn’t the plan. I’ve been saying already for a lot of days that we’re mainly here to take care of Primoz [Roglič], also today that was the big plan. But actually this morning the guys surprised me a bit saying that, if it all went as planned and Primoz went safe into the last 3 km we could see if I could be the one crossing the line first. It was already pretty special. I want to thank the team and everyone involved. The yellow jersey is pretty special, but the red one after that is maybe even more special. I aim for more, but it was an amazing day and I’m already looking forward for tomorrow. In my home country, with a lot of people cheering, it’s really amazing for me and for everyone.”

# Keep it PEZ for all the Vuelta a España action. #