Vuelta Stage Report: The final day in Holland for la Vuelta a España 2022 came down a bunch sprint again. Just like Saturday, Sam Bennett was first across the finish-line beating Mads Pedersen (Trek-Segafredo) and Dan McLay (Arkéa Samsic). Jumbo-Visma kept the red jersey in the family, but now on the shoulders of Edoardo Affini.

Sam Bennett won the third stage of the Vuelta a España in Breda. The Irish rider of BORA-hansgrohe was the fastest in the bunch. Mads Pedersen and Daniel McLay joined him on the podium. 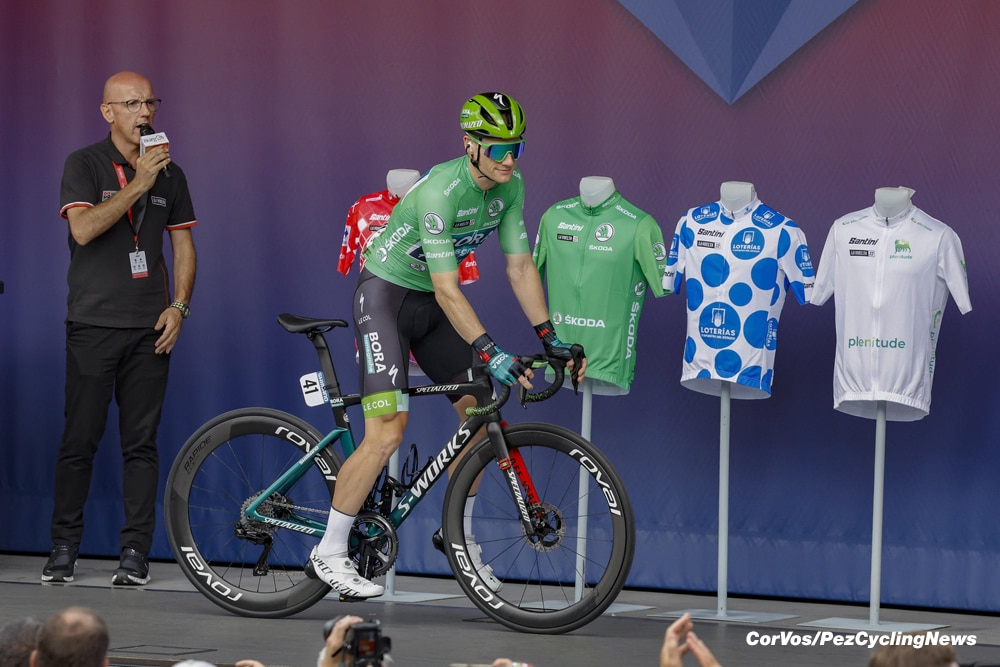 Fernando Escartín: “Completely flat stage with a guaranteed sprint to the finish-line. The riders will pedal through a terrain more reminiscent of the Classic races of the North and not the Spanish roads La Vuelta is accustomed to. This factor may create some tension with regards to the stage’s development.” 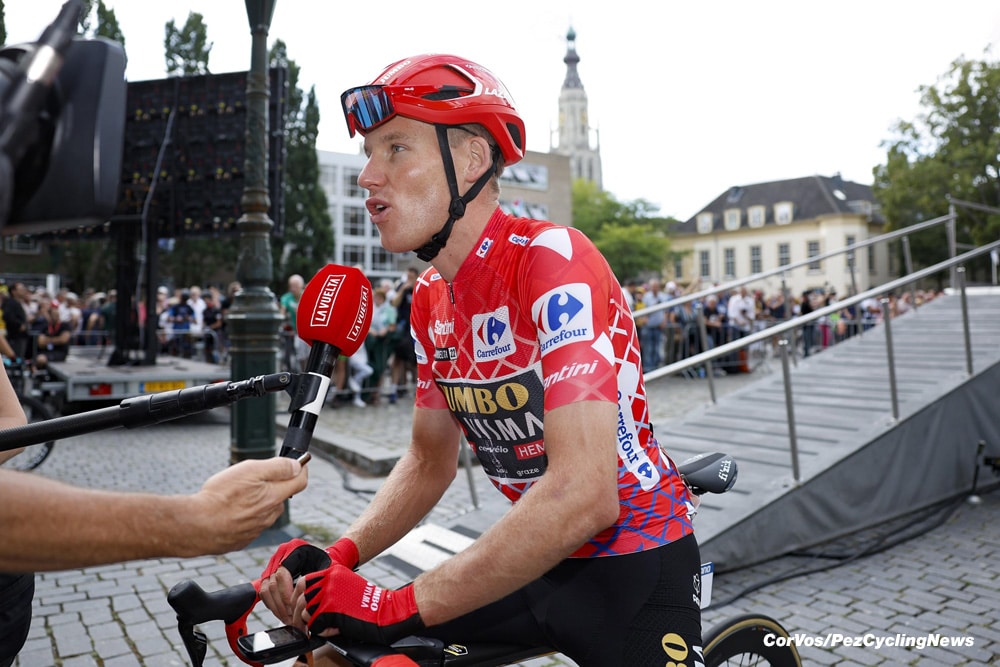 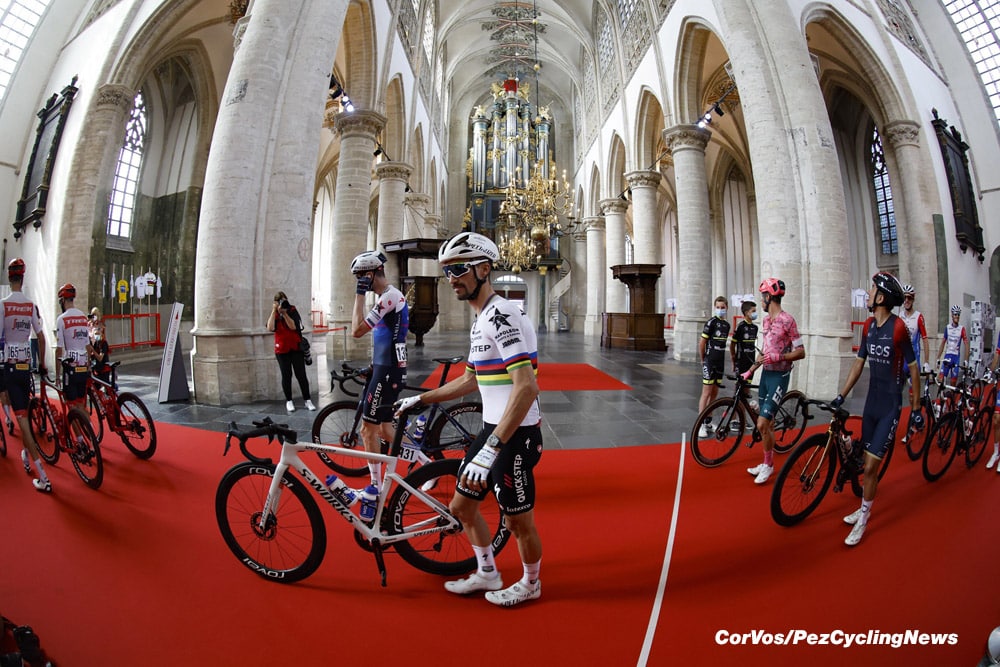 The leaders had a 3 minute lead after 10 kilometres, but the peloton thought that was enough. BORA-hansgrohe and Trek-Segafredo controlled the race, as they had taken first and second place yesterday with Sam Bennett and Mads Pedersen. 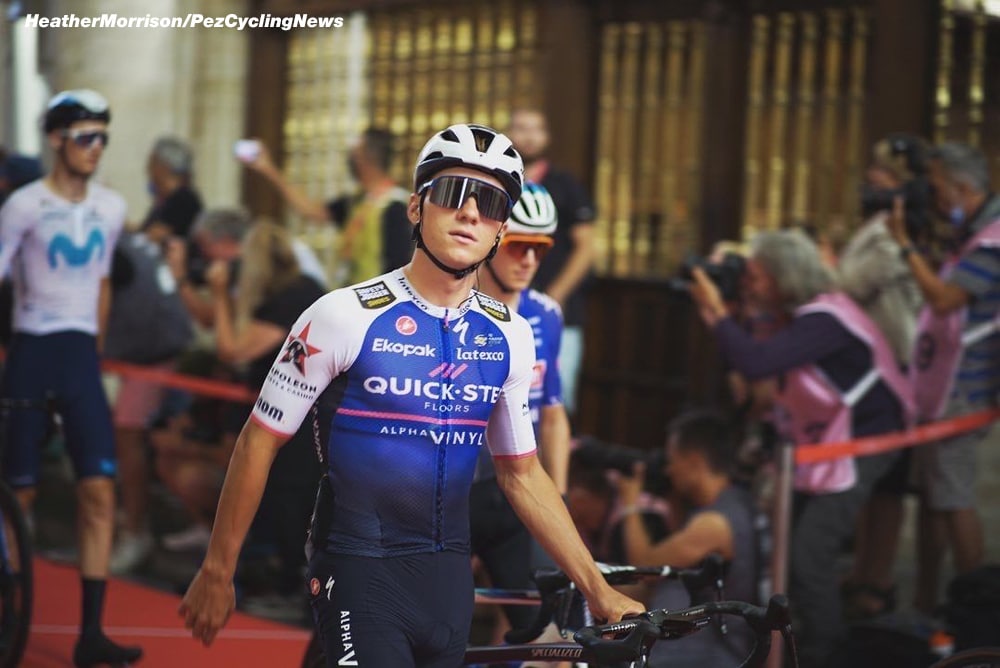 Remco Evenepoel in the Grote Kerk 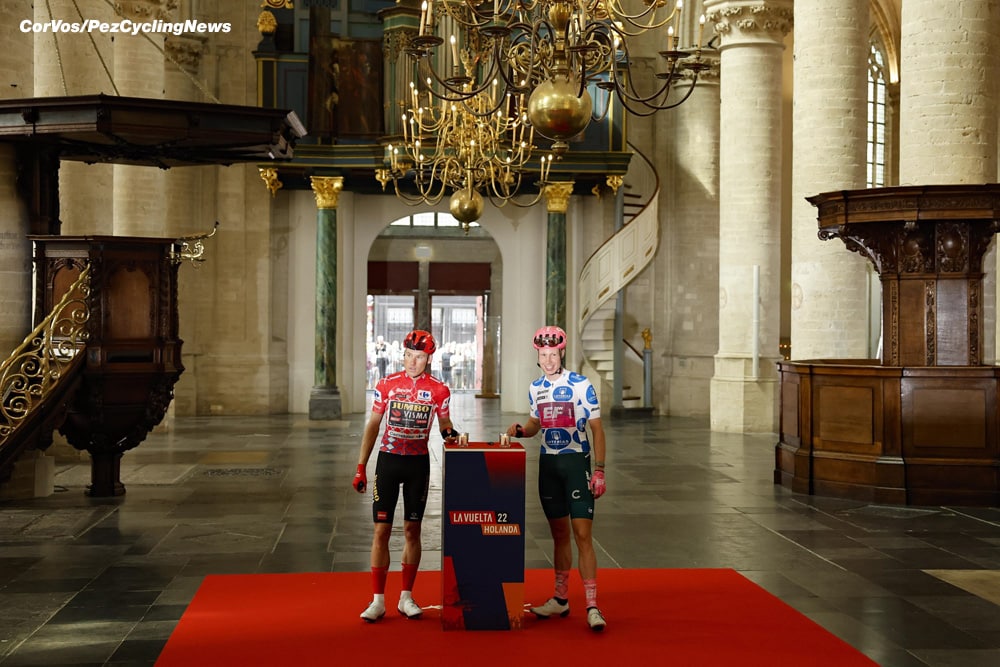 The start of the stage was not good for the Israel-Premier Tech team as two of their riders crashed: GC man Michael Woods and sprinter Itamar Einhorn. Woods was badly injured and eventually had to abandon, a big loss for the team of Chris Froome. 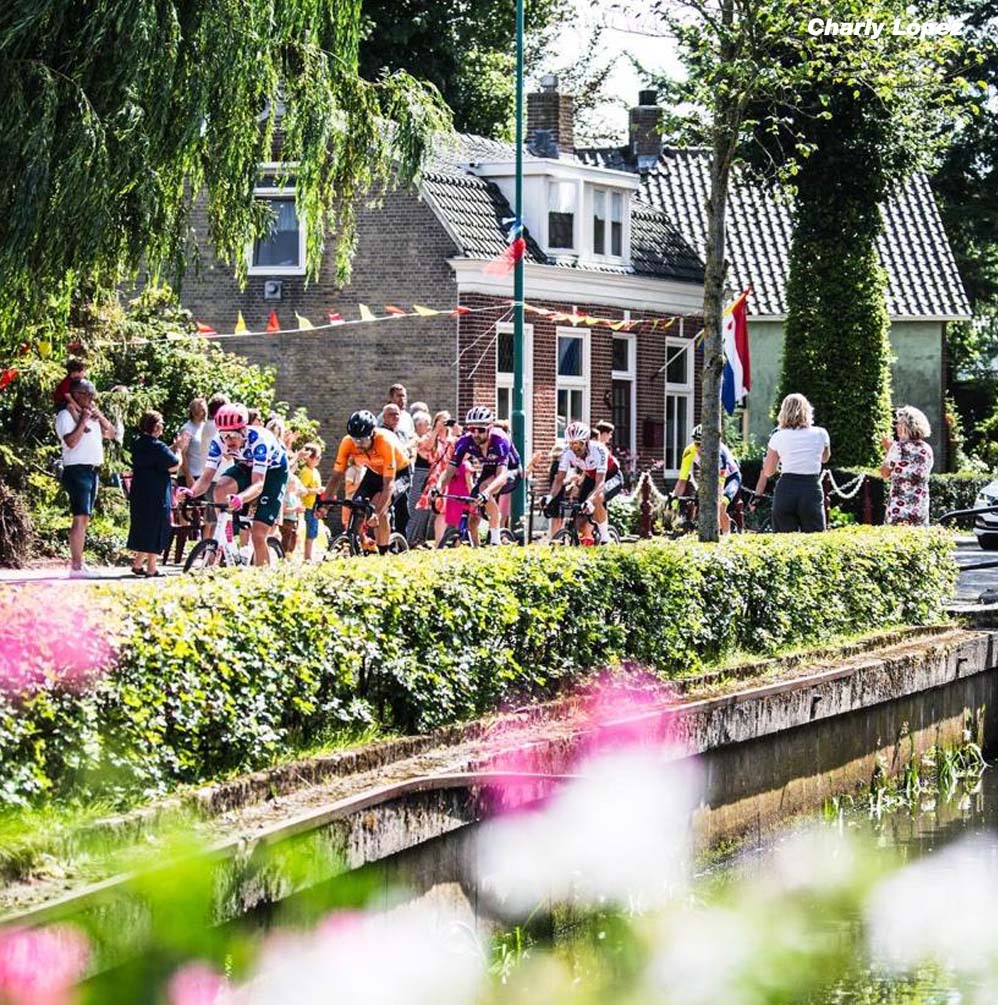 The break formed soon after the start in Breda 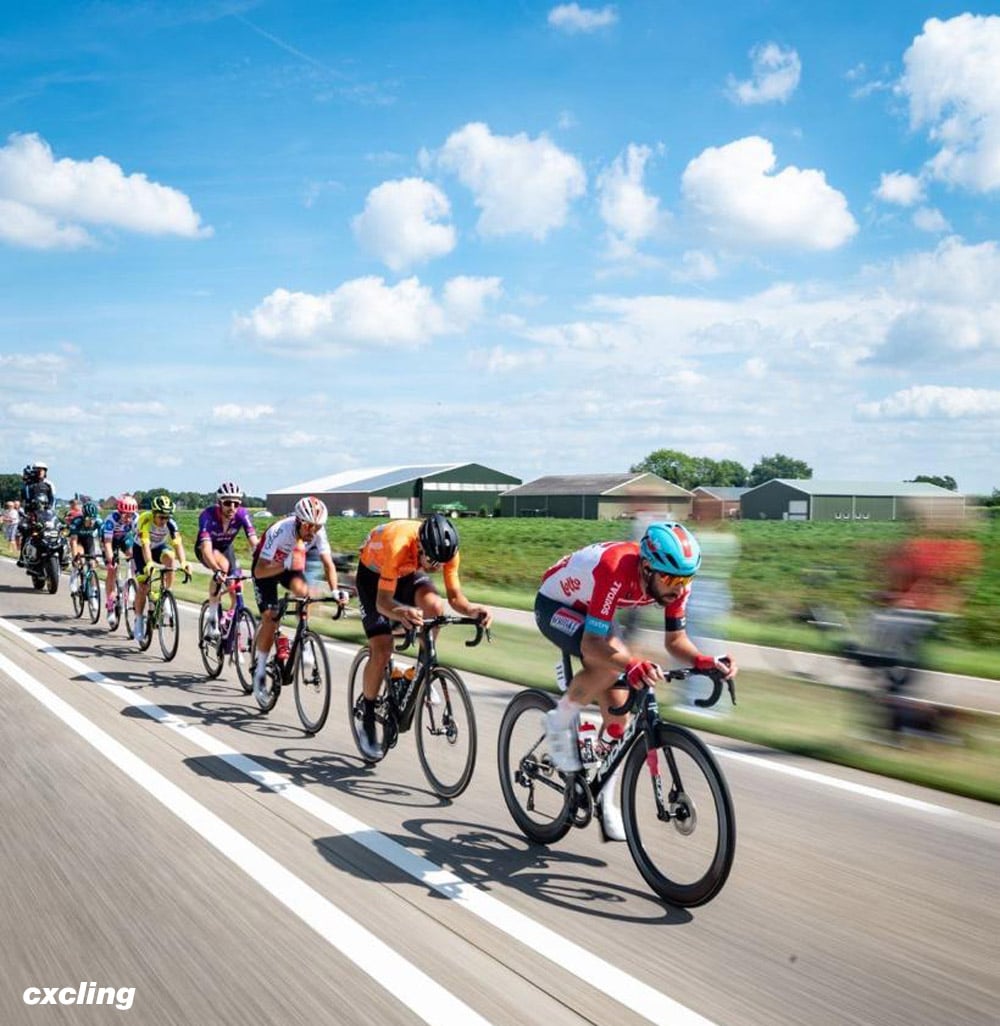 Alpecin-Deceuninck, working for Belgian champion Tim Merlier, also appeared at the front of the peloton. The lead of the break of the day was now controlled by three teams. Next on the menu was the Rijzendeweg, a Cat.4 climb. With a lead of 1 minute, the seven escapees would fight for the mountain points at the summit of the Rijzendeweg. It was a battle between Van den Berg and De Gendt. Belgian De Gendt was the first, but Van den Berg scored a point and so successfully defended his mountain jersey. 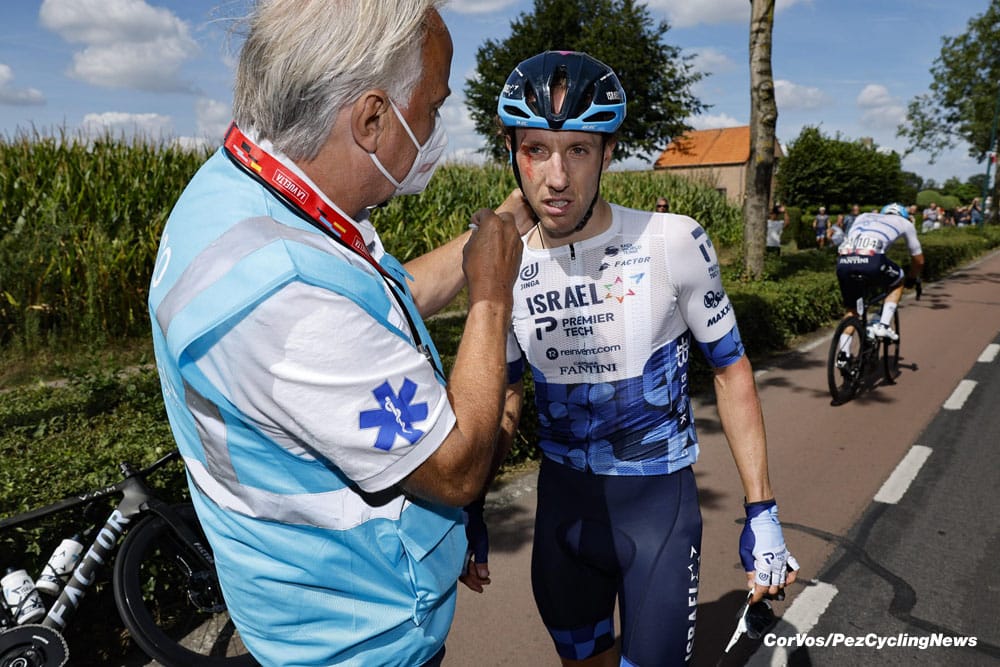 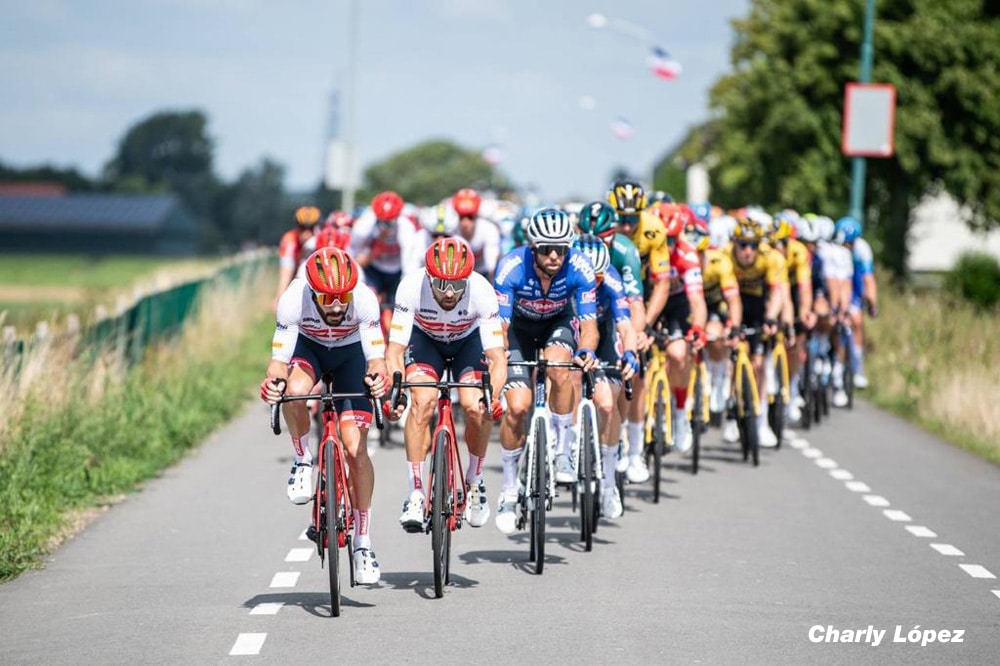 With 45 kilometres to go, the break’s lead was only 30 seconds. BORA-hansgrohe had meanwhile disappeared from the front. The seven-man escape didn’t give up and accelerated again before intermediate sprint, which was 23 kilometres from the finish. Once again it was De Gendt who took the most points. This was the last effort for the Belgian as he let himself be caught by the peloton. 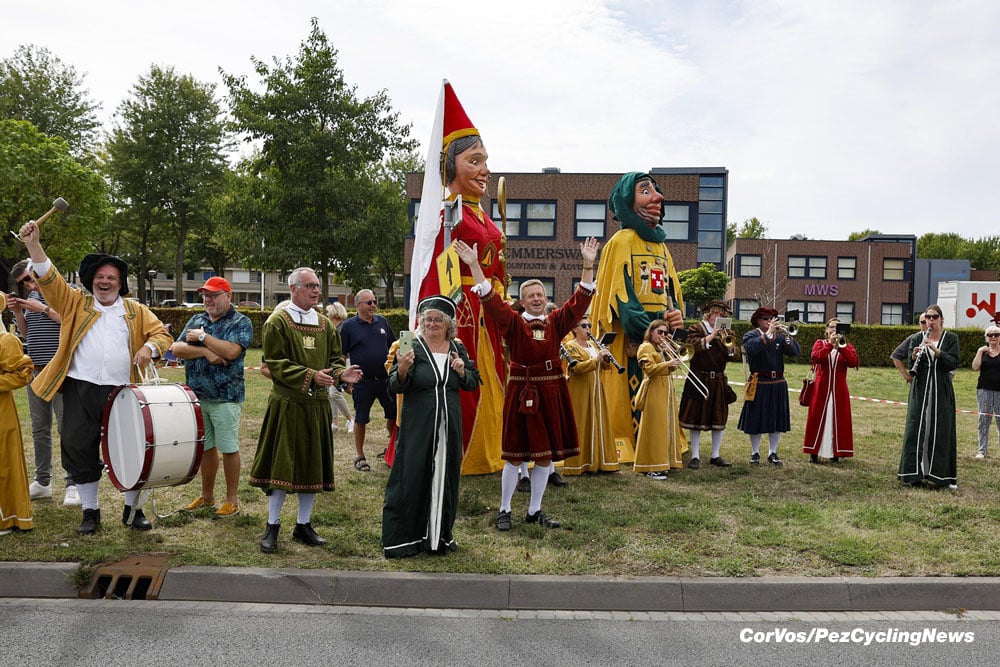 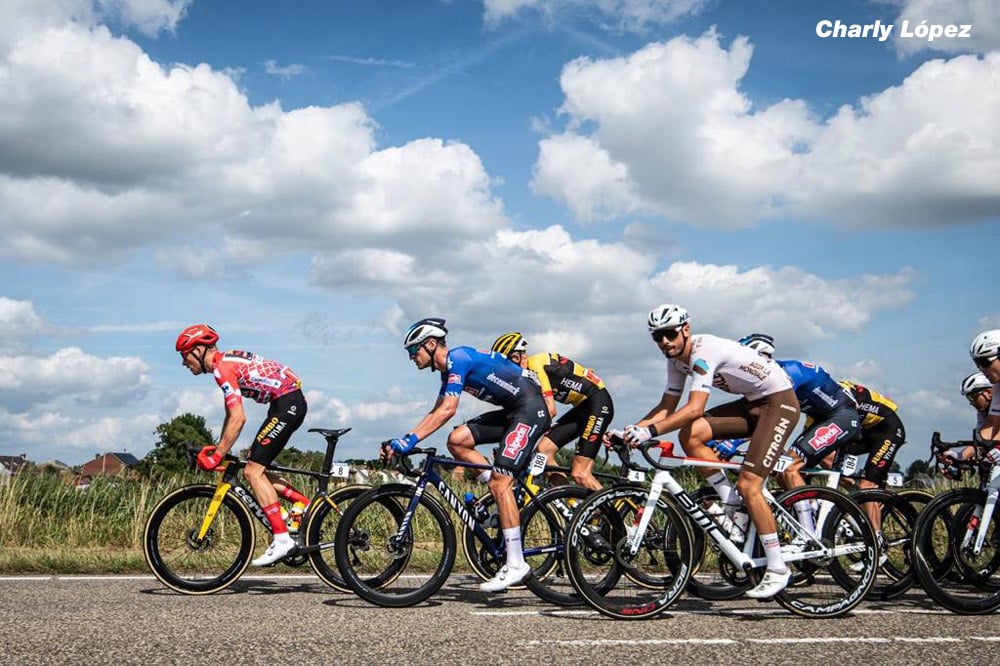 The red leader’s jersey was also seen at the front

It was soon all hands on deck for INEOS Grenadiers, as Richard Carapaz crashed. The Ecuadorian was helped by Pavel Sivakov and Tao Geoghegan Hart to get back into the peloton. The bunch caught the last remaining escapees at just under 12 kilometres from the finish. 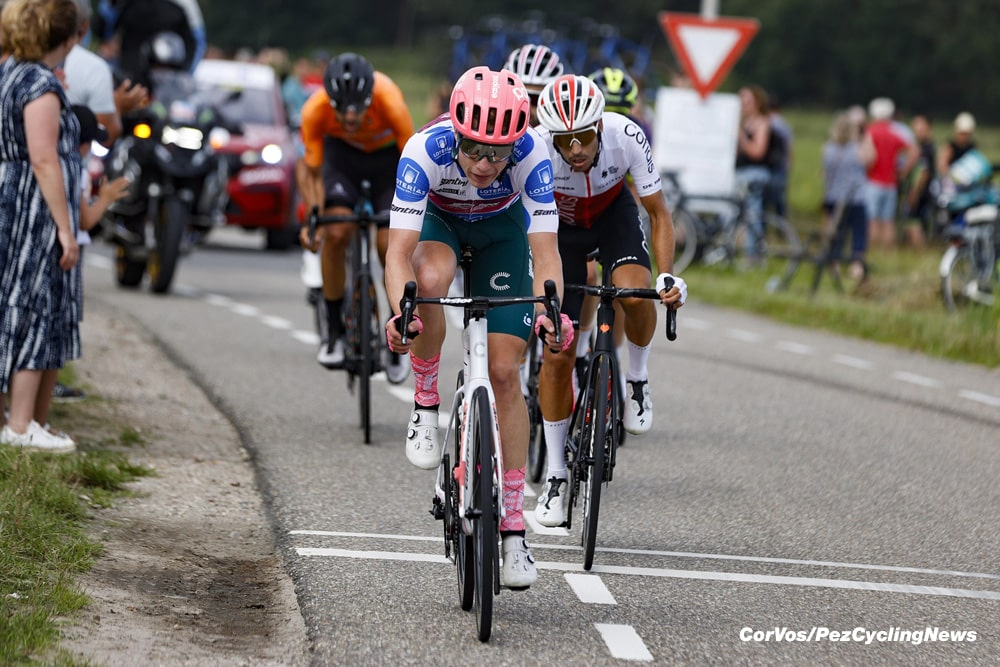 In the final 10 kilometres, Alpecin-Deceuninck put their lead-out train on the front. Not much later, Mike Teunissen also came forward with the Jumbo-Visma GC men on his wheel. In the last kilometre it was UAE Team Emirates who did the best lead-out for Pascal Ackermann, however, he never got involved. 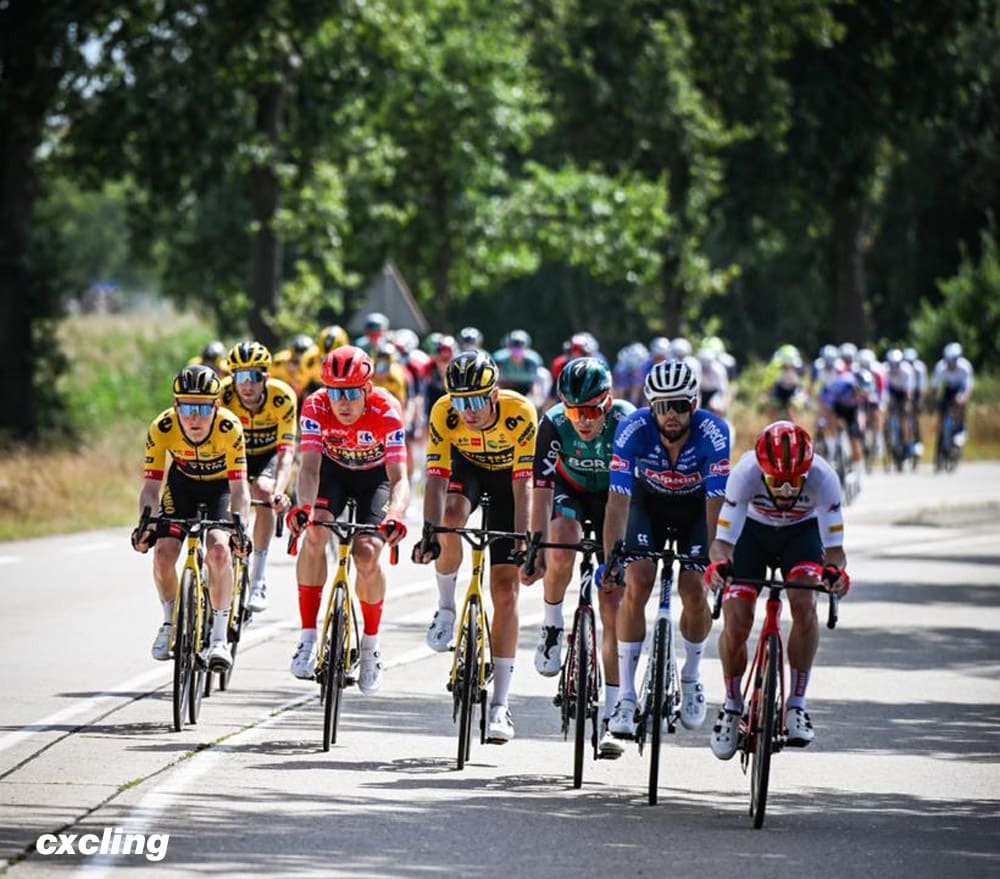 The peloton held the break close

It was Sam Bennett who started the sprint from far out and held the others off to the line. Mads Pedersen came close, but just like yesterday had to give in to the Irishman. Daniel McLay was third. Edoardo Affini was the first rider of Jumbo-Visma to cross the line, making him the new leader on the overall classification. 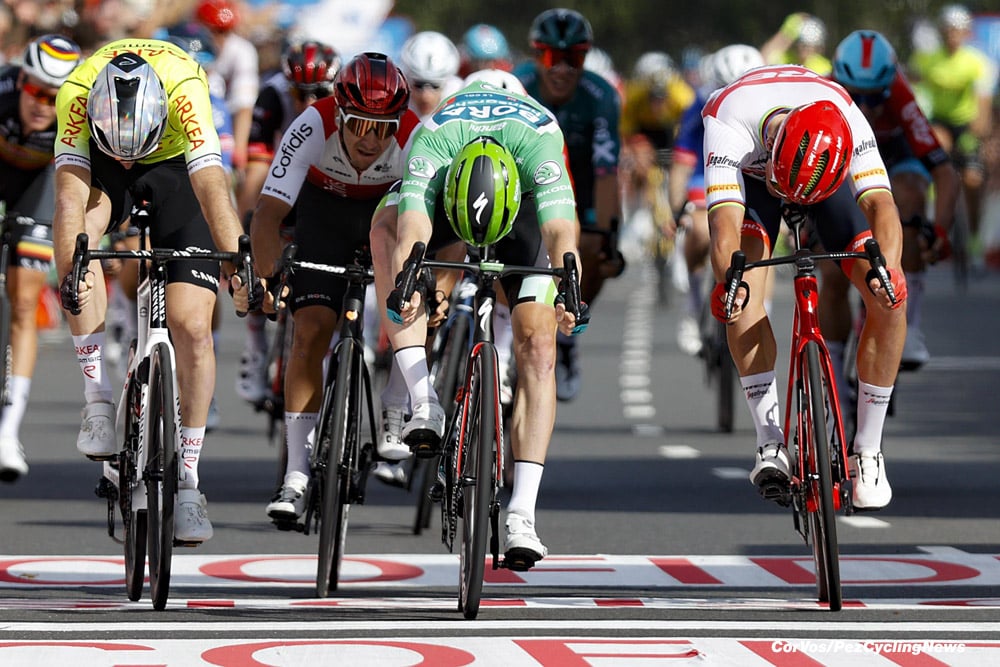 The end of a messy sprint in Breda

Stage winner, Sam Bennett (BORA-hansgrohe): “It was quite hard because I think a lot of people were fighting for our wheel. People started to go up on the inside and squeeze me off. It was quite a hard fight. A big thank you for the boys, they worked all day, looked after me the whole stage. It was a really nervous day with a lot of accelerations. In the finale, Ryan [Mullen] came up there, and then Danny [Van Poppel]. It’s quite nice to make it happen two days in a row.” 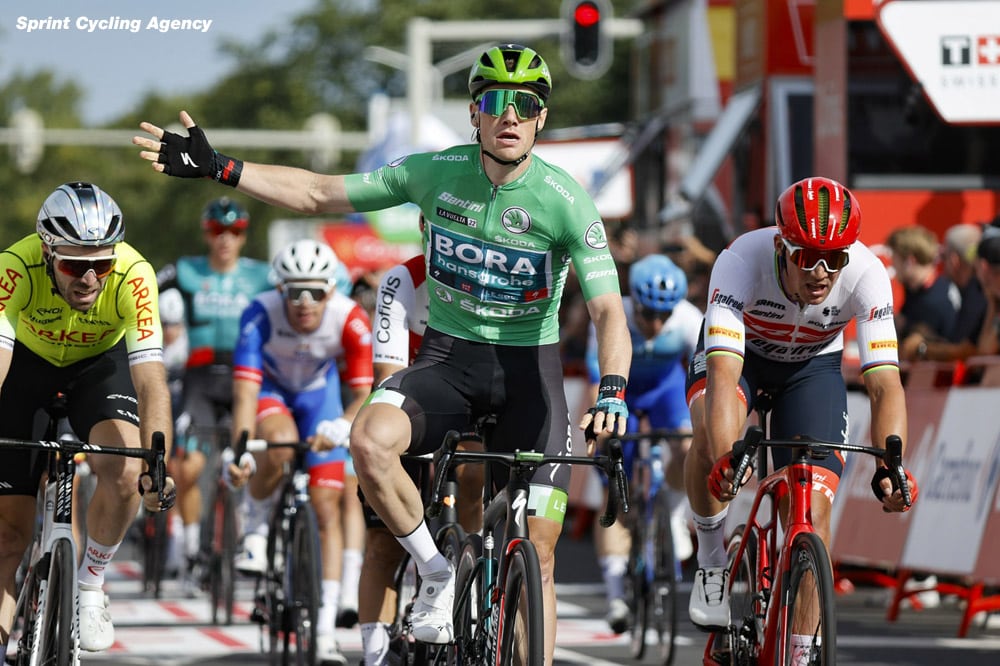 Sam Bennett is on fire

Overall leader, Edoardo Affini (Jumbo-Visma): “It all started with winning the time trial and it’s amazing to be able to share these moments in our team’s country. I guess it was even more special for our Dutch guys, but it also is for me. To be the leader of a general classification here is really an amazing feeling. It’s crazy to be able to be the leader. I have to thank my team, I have to thank my teammates. They’ve actually been thinking about it. It’s really nice of them to make me such a gift.” 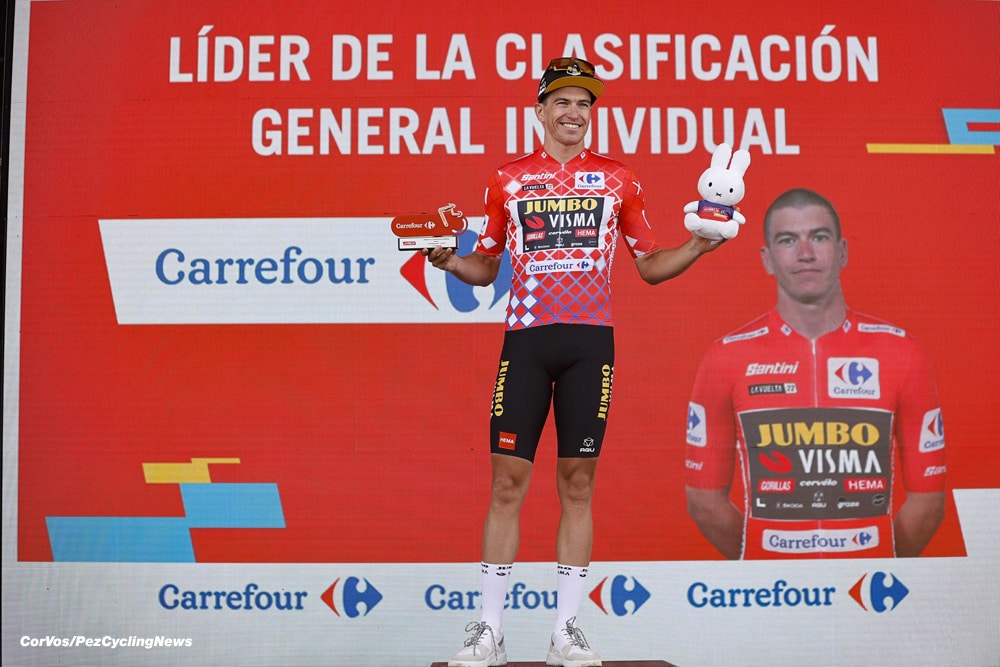 Now it was Edoardo Affini’s turn to wear red

# Keep it PEZ for all the Vuelta news: EUROTRASH and ‘The Rest Day Round Up’ on Monday. #