Vuelta Stage Report: After strong lead-outs from first Movistar and then Trek-Segafredo, it was triple Vuelta a España winner, Primož Roglič, who was first to swoop across the finish line in Laguardia ahead of Mads Pedersen and Enric Mas. Roglič also took the leader’s red jersey from his teammate Edoardo Affini.

Primož Roglič won the fourth stage of the Vuelta a España. On the uphill finish in Laguardia, the Slovenian leader of Jumbo-Visma was the strongest. He beat Trek-Segafredo’s Mads Pedersen into second place, Enric Mas crossed the line in third. Roglič also took over the red jersey. 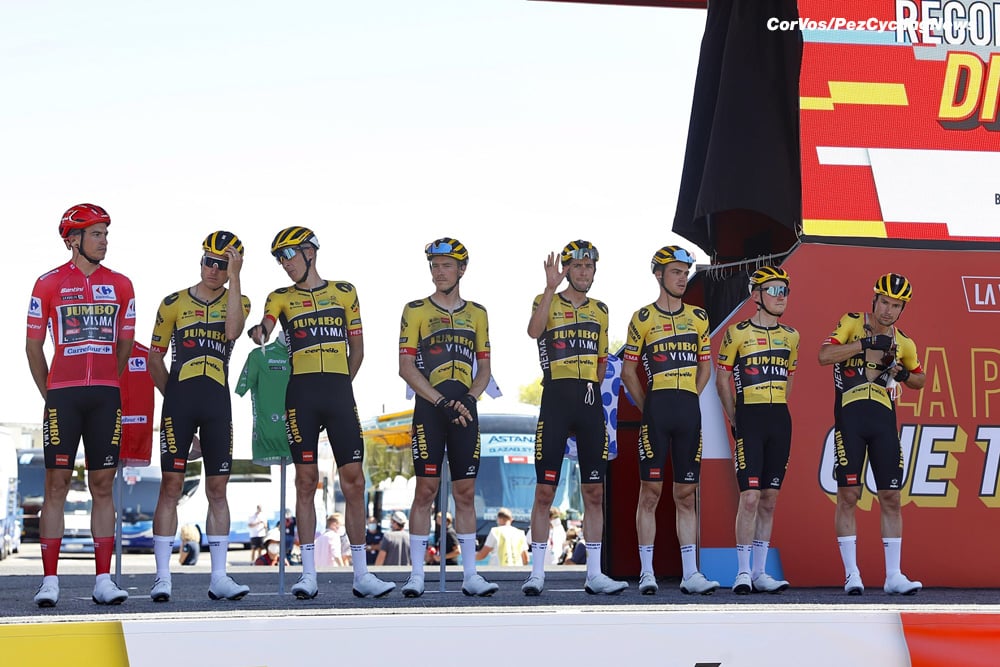 Fernando Escartín: “Stage with a likely sprint to the finish-line in a reduced peloton. The Herrera mountain pass will be crowned 15 km before the finish-line, then followed by a descent to the end. Sprinters who know their way around abrupt terrain will do well and have real opportunities, but pure sprinters will not be able to keep up if they speed off. Careful with the possible gusts of wind in the final part of the stage.” 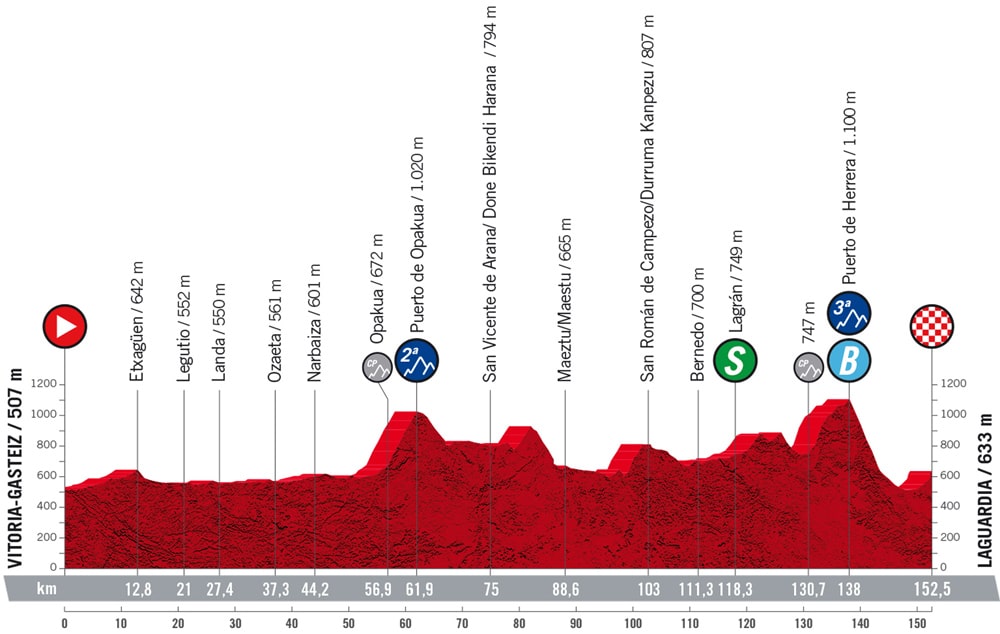 After three stages in the Netherlands, the Vuelta caravan traveled to Spain on Monday. The 152.5 kilometre fourth stage went from Vitoria-Gasteiz to Laguardia. At the start of the stage, a leading group of six was formed. Alexey Lutsenko (Astana Qazaqstan) and Alessandro De Marchi (Israel-Premier Tech) were joined James Shaw (EF Education-EasyPost), Jarrad Drizners (Lotto Soudal), Ander Okamika (Burgos-BH) and Joan Bou (Euskaltel-Euskadi). 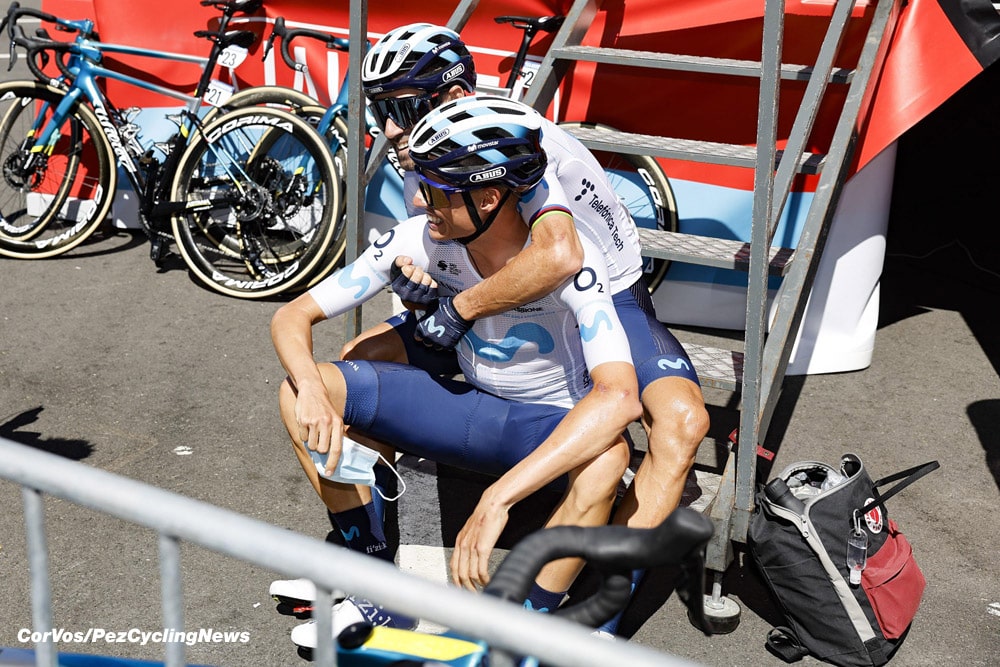 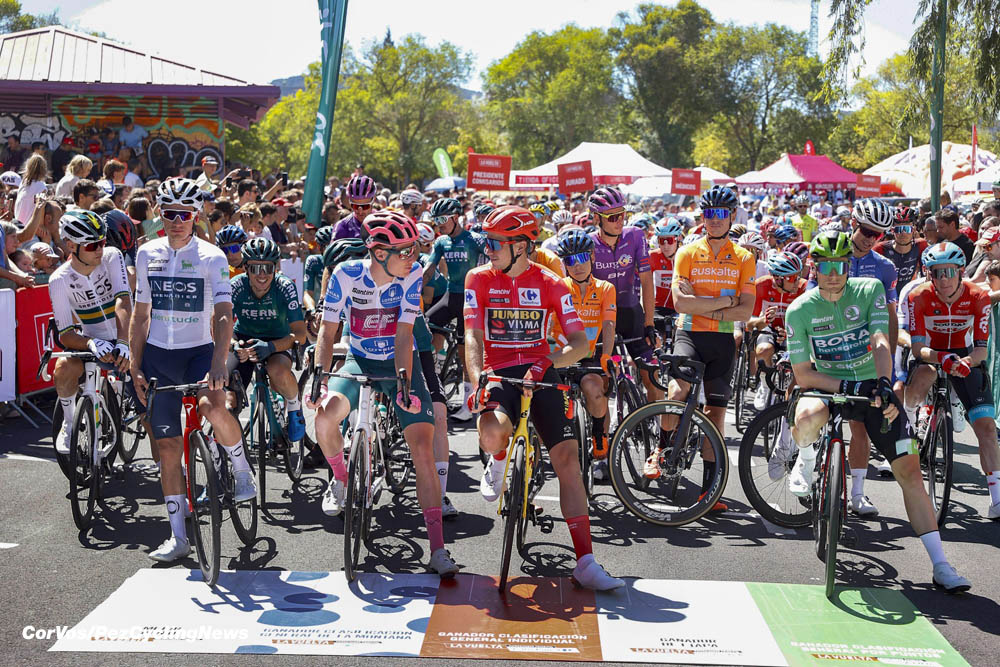 The Vuelta leaders at the start of stage 4

A counter-attack by the KOM, Julius van den Berg (EF Education-EasyPost), Jetse Bol (Burgos-BH) and Xabier Azparren (Euskaltel-Euskadi) couldn’t get across and once the leading group of was formed, the peloton eased off. Jumbo-Visma, for red jersey Edoardo Affini, took control of the pursuit with BORA-hansgrohe. Bou won the KOM of the day after 61.9 kilometres, on the Puerto de Opakua, this was worth 5 points and so he took the virtual lead of the mountains classification. 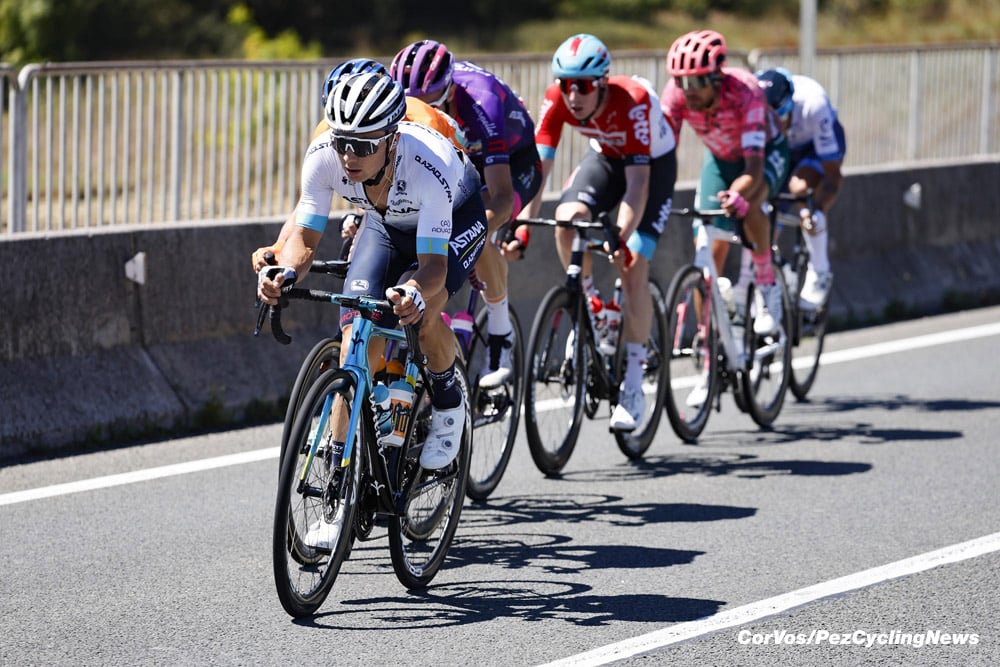 The ‘break of the day’ led by Alexey Lutsenko 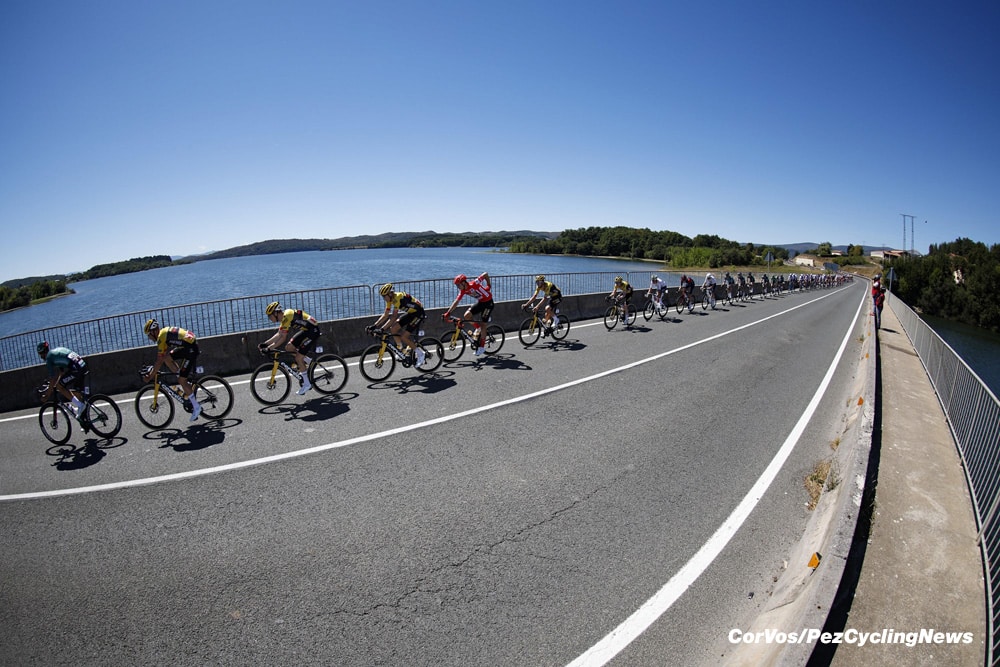 The peloton was keeping the break close

Jumbo-Visma kept the pace high, so that the leading group did not take more than 3 minutes. Due to the high pace, the peloton split 75 kilometres from the finish, with KOM Van den Berg, Domenico Pozzovivo (Intermarché-Wanty-Gobert), Thomas De Gendt (Lotto Soudal) and Tim Merlier (Alpecin-Deceuninck) being dropped. A few kilometers later, Okamiko was the first to loose his place in the leading group. With 60 kilometres to go, the lead of the five had shrunk to 1 minute. 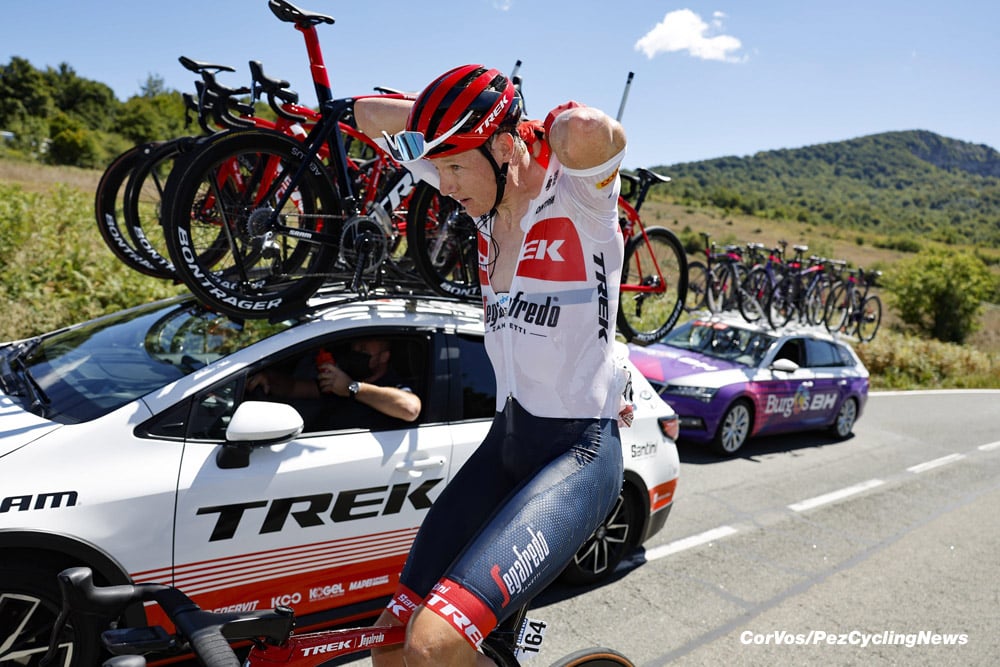 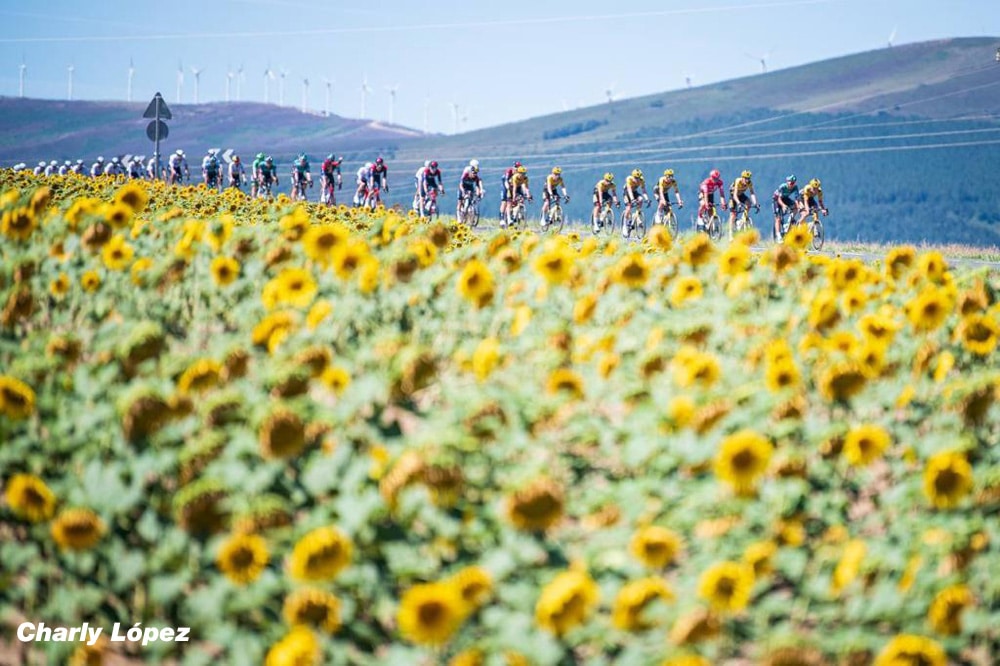 Yes, there are sunflowers in Spain too

Drizners and Bou were also dropped 53 kilometres from the finish, leaving only Lutsenko, Shaw and De Marchi out front. Ten kilometers further on and the peloton accelerated, reducing the gap to 20 seconds. The three escapees crossed the intermediate sprint, 34 kilometres from the finish, but were then caught. The sprint of the peloton was won by Mads Pedersen, who beat Sam Bennett, winner of two stages in the Netherlands. 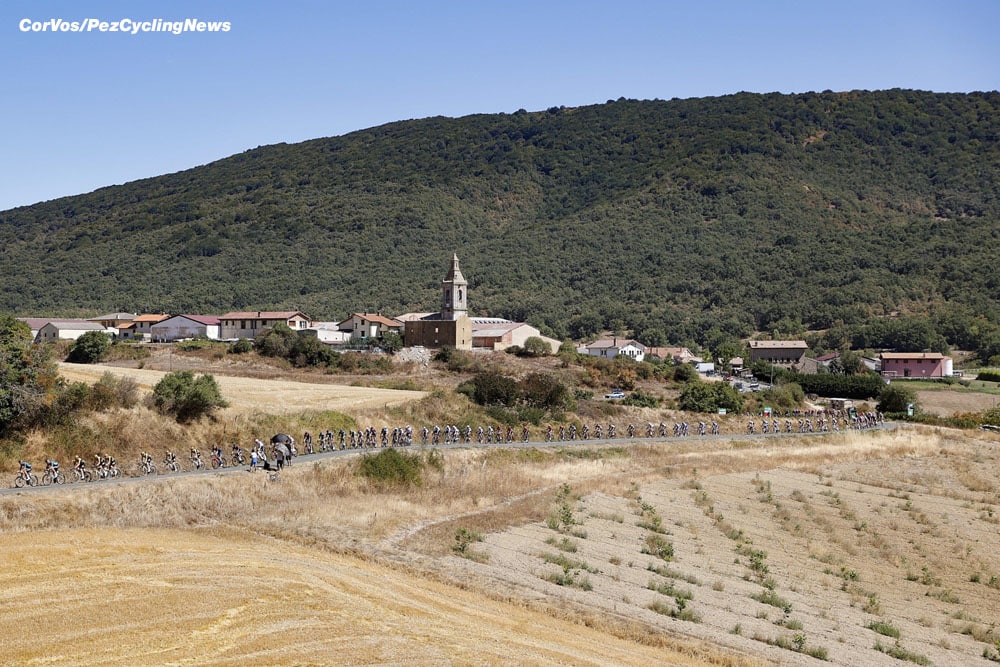 Dry and hot even in the north of Spain 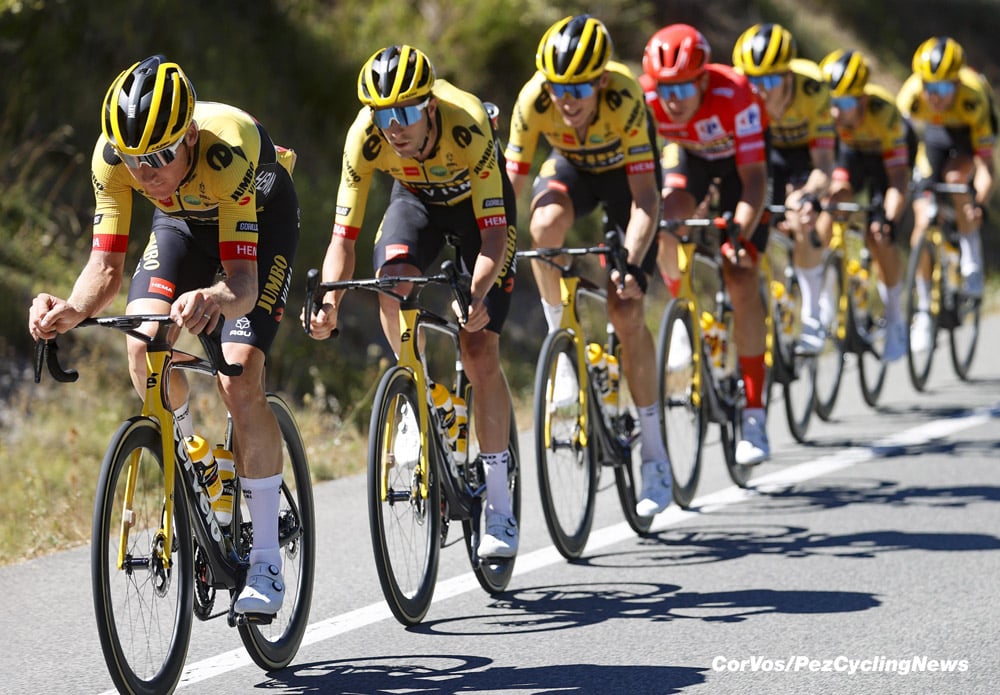 The peloton was still together when it started the climb of the Puerto de Herrera, the second climb of the day. There, red jersey wearer Affini had to let go again, after he had worked hard for the team earlier in the race. The peloton thinned out on the climb as Trek-Segafredo picked up the pace. Just before the top, Julian Alaphilippe jumped. Primož Roglič reacted and came over first; the Slovenian not only took KOM points but also a GC bonus of 3 seconds. After the climb, Quick-Step Alpha Vinyl pulled hard to put pressure on the peloton. 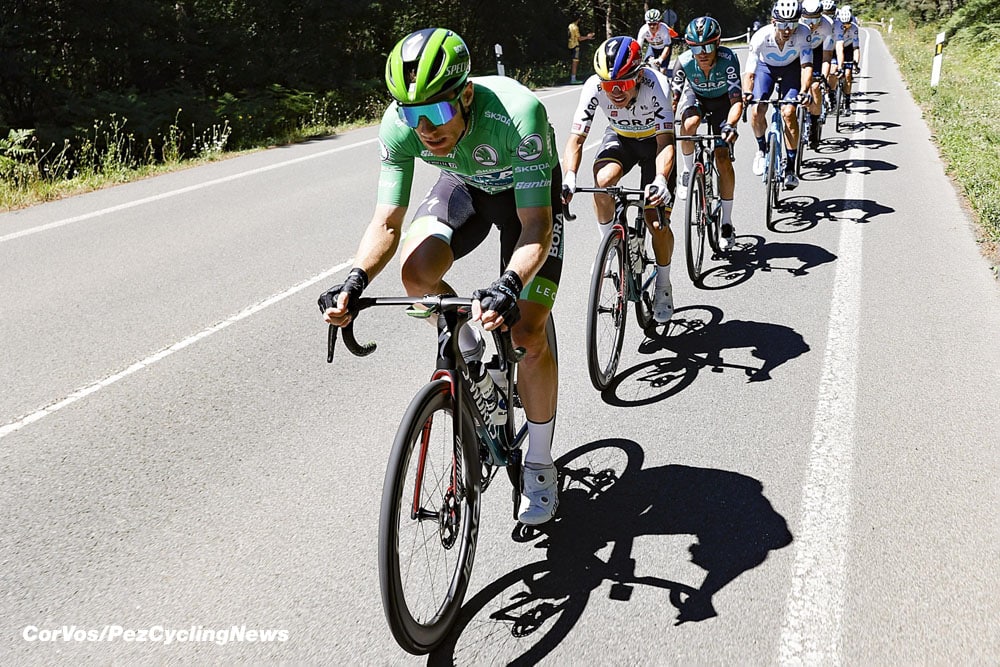 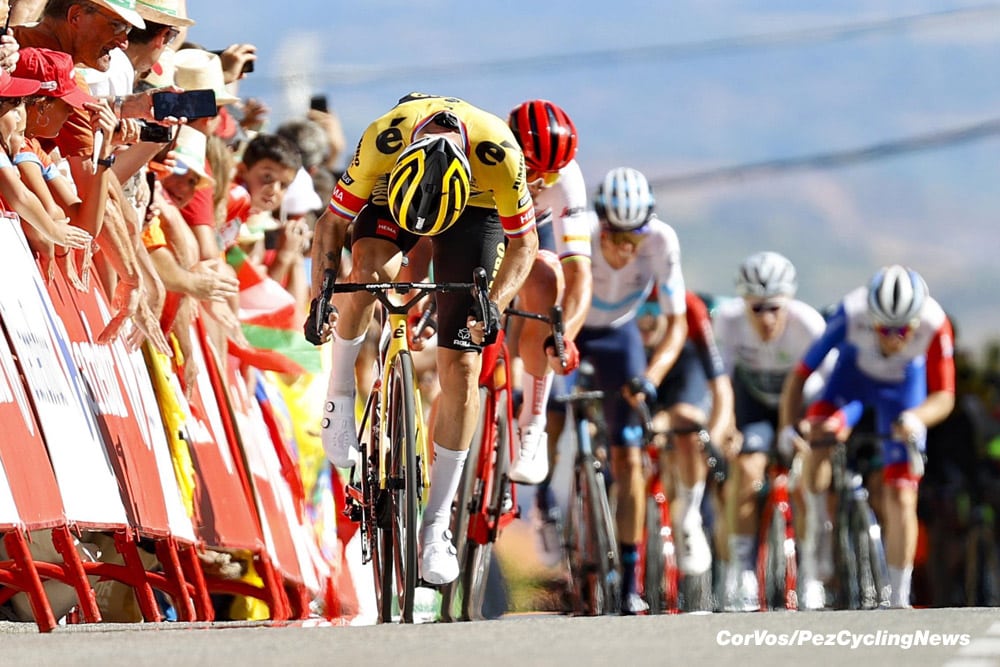 Vincenzo Nibali tried to get away with 7 kilometres to go to the line. There were several attacks in the peloton, but a thinned out bunch stayed together until the uphill last kilometre to the finish. Trek-Segafredo worked hard for Mads Pedersen. However, the Dane was out-jumped by Primož Roglič. The Slovenian had the best final kick and took the stage victory. He also took the red leader’s jersey from his teammate Affini. 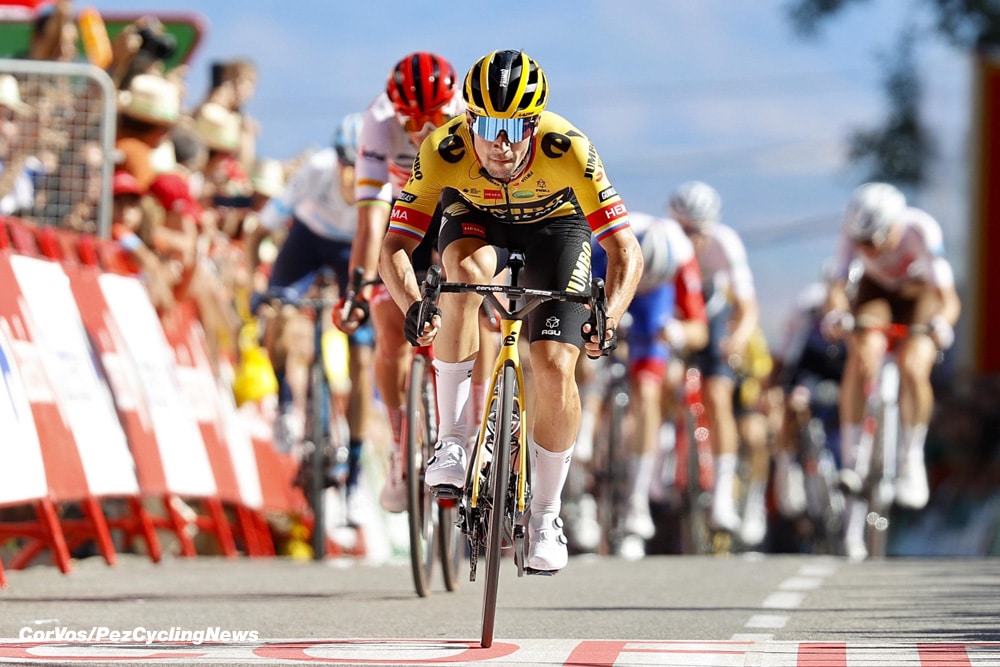 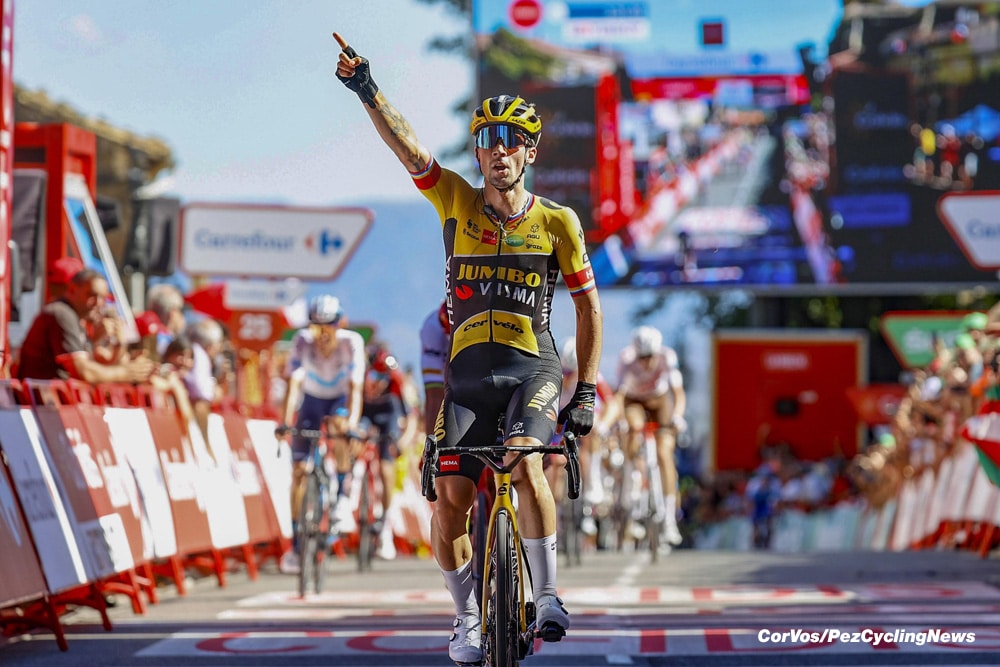 Stage winner and overall leader, Primož Roglič (Jumbo-Visma): “I’m super happy with this. How should I say it? This is just the beginning. But I always say: it’s better to be a few seconds ahead than a few seconds behind. The pace was very high all day, it was a super fast stage. In the final there was a chance to ride for the stage win and I had the legs, so I gave it my all. That was the plan, wasn’t it? To change the wearer of the red jersey every day. Today was my lucky day. We’ll see what tomorrow brings.” 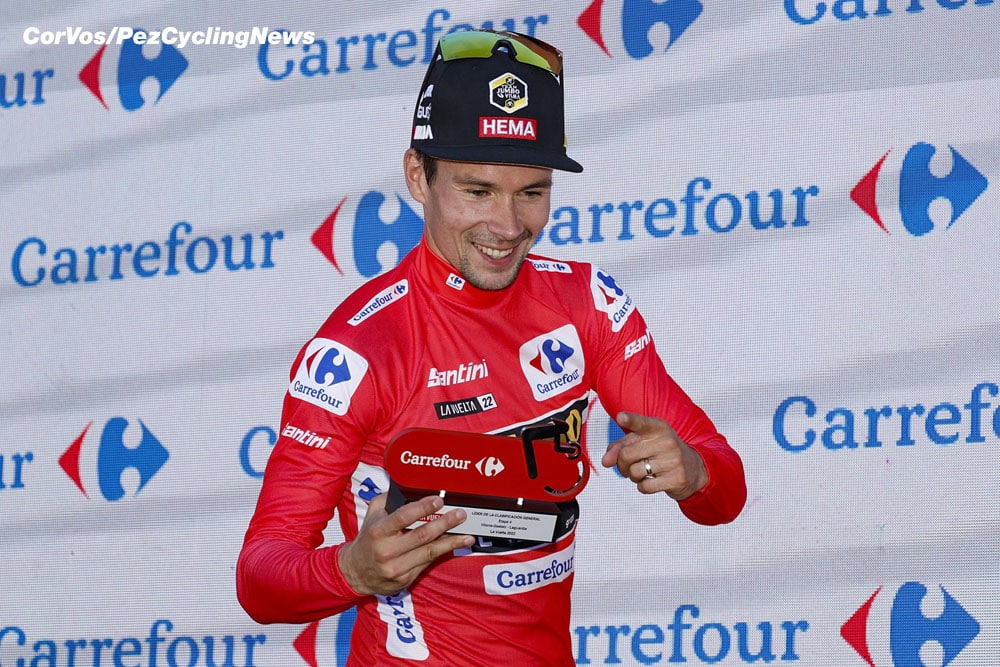 Roglič in red – Will he still be in the lead in three weeks?

# Keep it PEZ for all the Vuelta a España news. #

Caleb Ewan to miss out on selection for Australia World Championships