Vuelta Stage Report: The man who came for Zwift racing, Jay Vine took his second Vuelta’22 stage win and again he had to ride solo through the mountain fog on the Collau Fancuaya. Vine finished 43 seconds ahead of Marc Soler and Rein Taaramäe. Overall leader, Remco Evenepoel, finished 5th at 1:20 with Enric Mas and Primož Roglič on his wheel.

The final kilometre of stage 8

Jay Vine took his second win in the Vuelta a España. In the ride to the Colláu Fancuaya, the Australian from Alpecin-Deceuninck was part of the long breakaway and drove his fellow escapees off his wheel on the 10 kilometre long final climb. Marc Soler (UAE Team Emirates) crossed the line in second, Rein Taaramäe (Intermarché) was third. Remco Evenepoel, the leader of Quick-Step Alpha Vinyl, kept the red jersey. 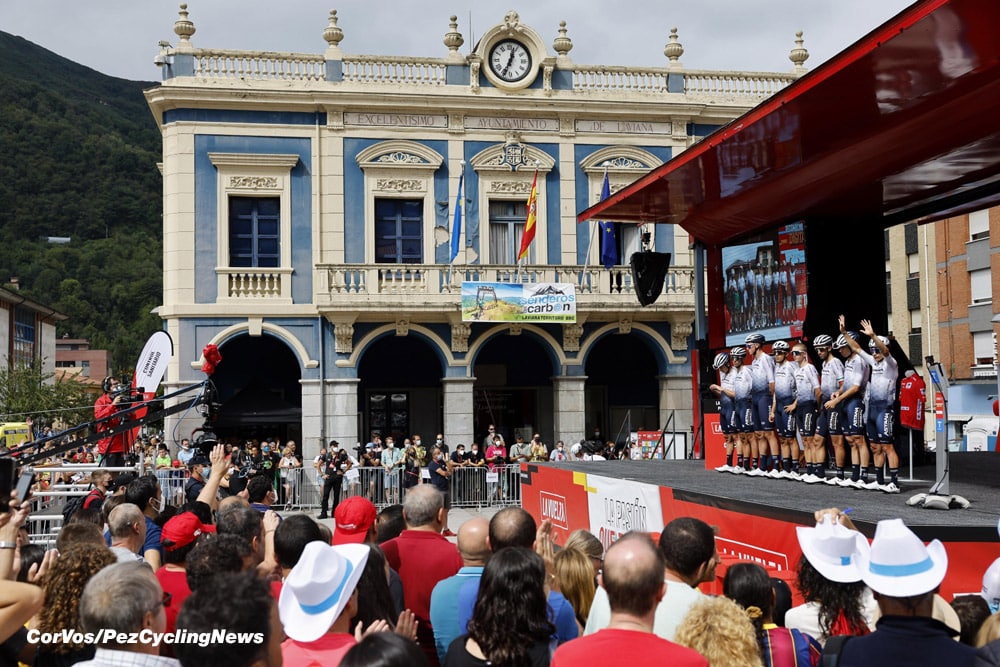 Fernando Escartín: “The Principality of Asturias offers us two very different stages this year. This first one is over 3,300 meters of elevation gain and has four scoring ascents before the unprecedented climb to Colláu Fancuaya. Port of very constant ramps that is around 10 km of ascent. It will be important for the favourites to keep their strength for this final stretch.” 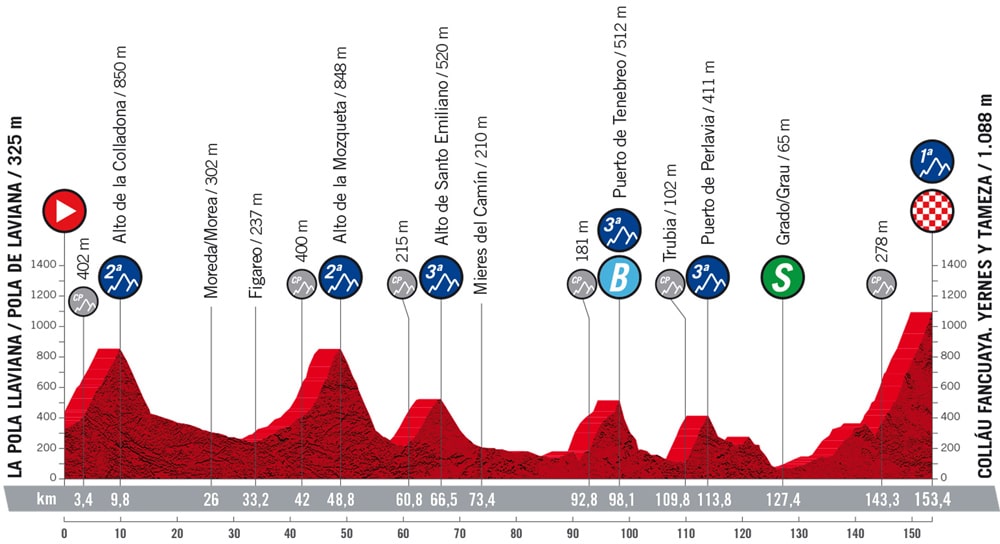 The Vuelta continued on Saturday with the 153.4 kilometre eighth stage from Pola de Laviana to the Colláu Fancuaya in Asturias, where the finish was at the summit of a 10.1 kilometre long climb with gradients of up to 19%. Before that final climb, the race had two climbs of Cat.2 and three of Cat.3. The victory could go to a break or there could be a GC battle on this stage with more than 3,500 metres of climbing. 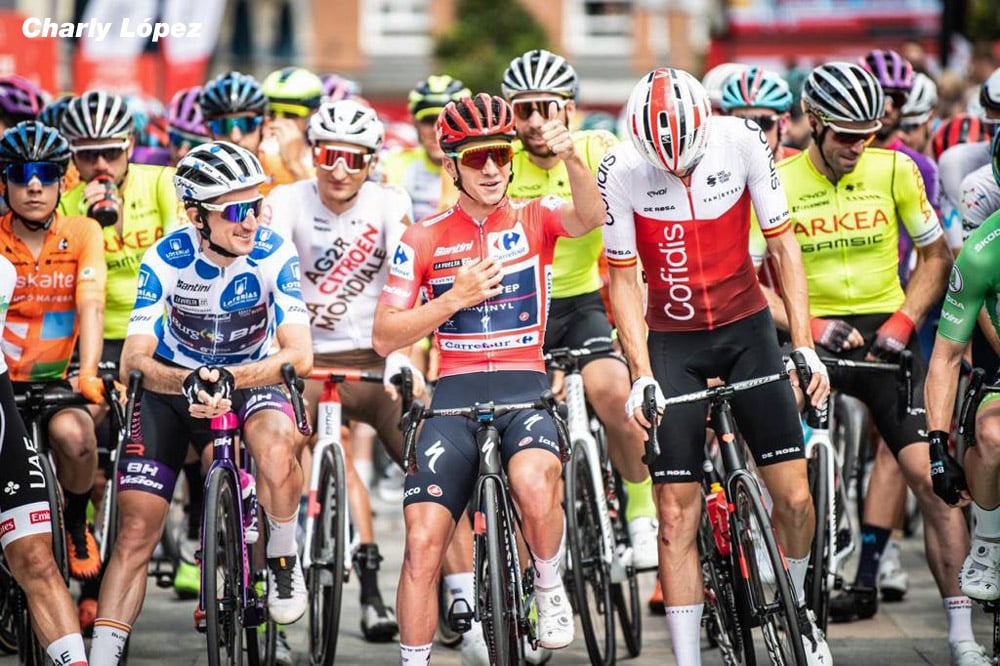 The classification leaders line up for the start 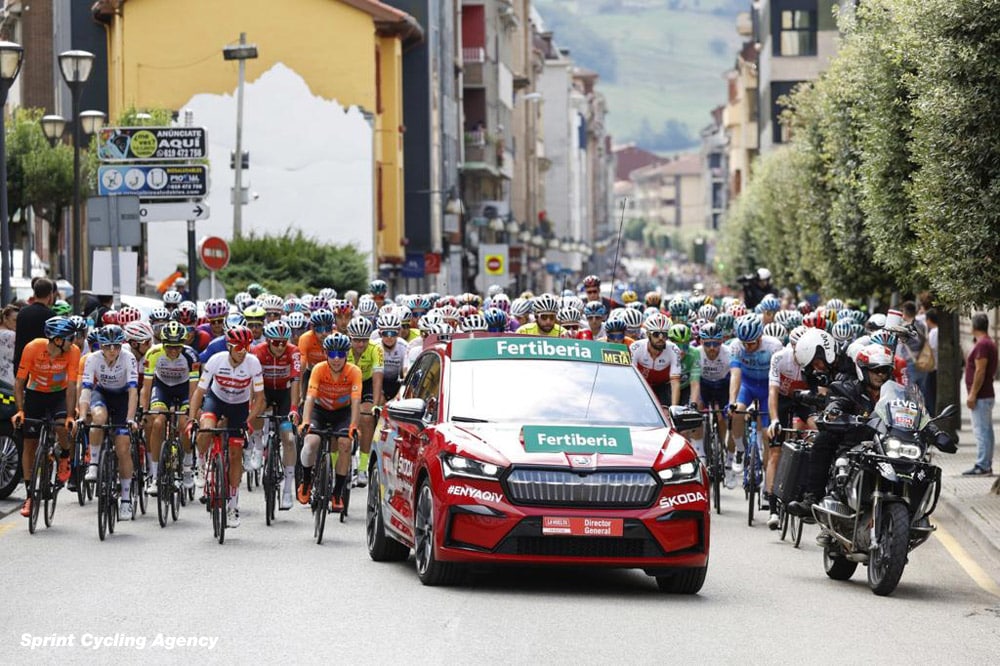 Four riders didn’t start: Nikias Arndt, Mark Donovan (DSM) and Anthony Delaplace (Arkéa Samsic) had all given positive covid tests and Jake Stewart (Groupama-FDJ) was ill. The road went straight up from the start and the attackers didn’t waste any time. Quick-Step Alpha Vinyl, the team of red jersey Remco Evenepoel, tried to control the race as best as possible. 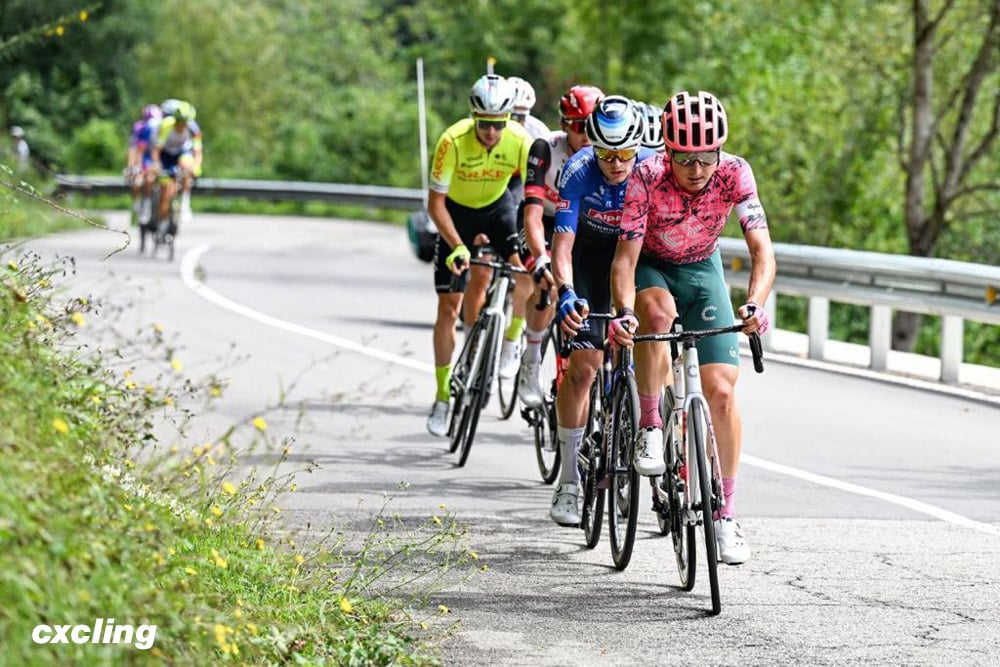 The first break of the day 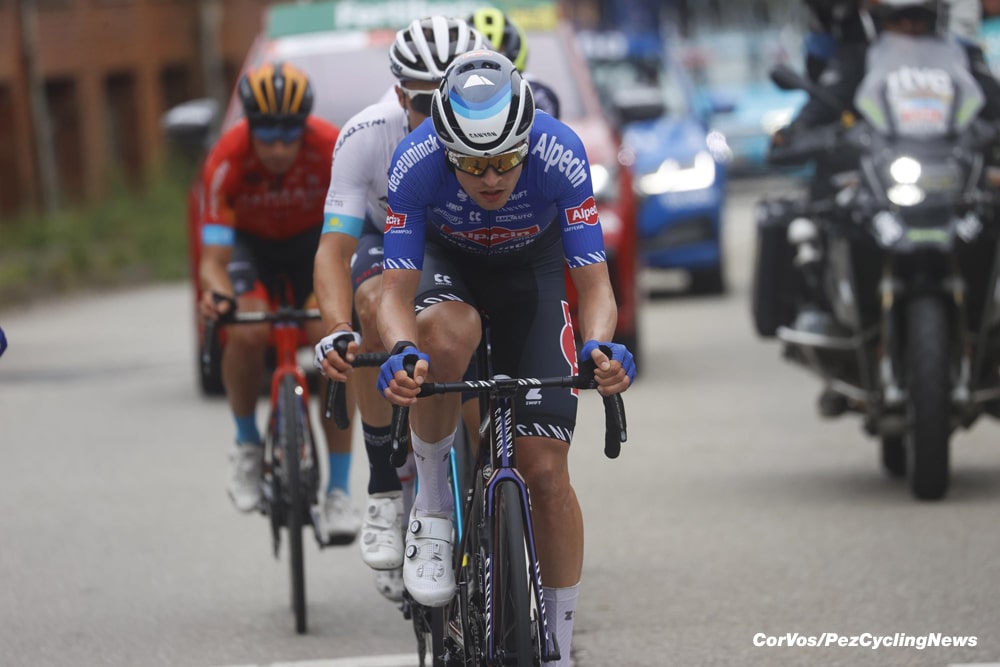 Jay Vine (Alpecin-Deceuninck) showing himself on the front again 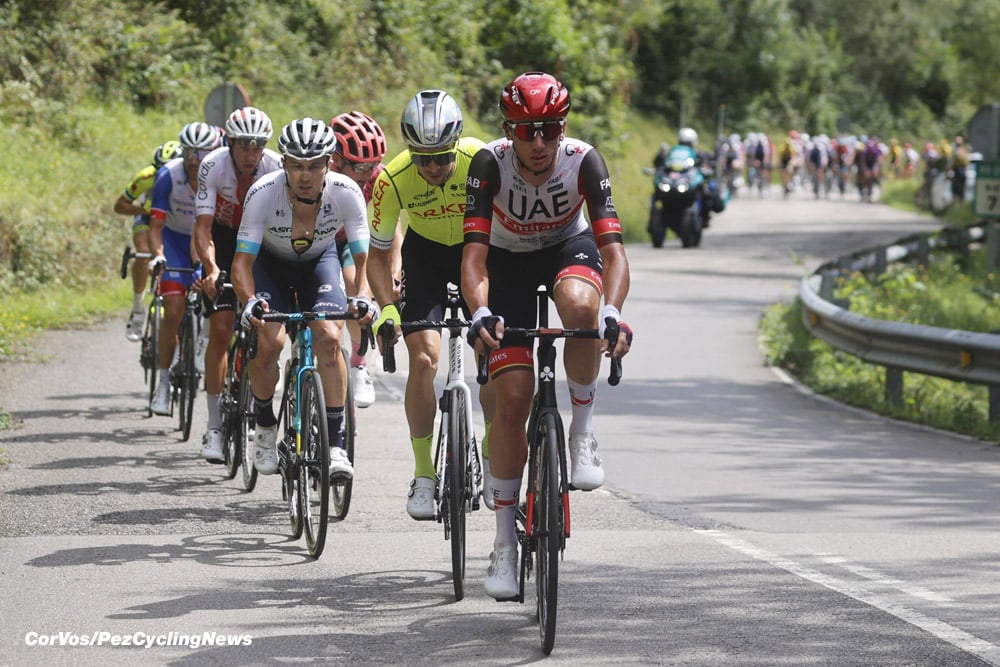 Early in the stage, the Vuelta KOM, Victor Langellotti, crashed and had to abandon the race. Vine, one of the escapees, was interested in the mountains classification. The Australian was already second with 11 points and would increase this by coming first over the top of the Alto de La Colladona, the Alto de La Mozqueta, the Alto de Santo Emiliano, the Puerto de Tenebreo and the Perlavia. 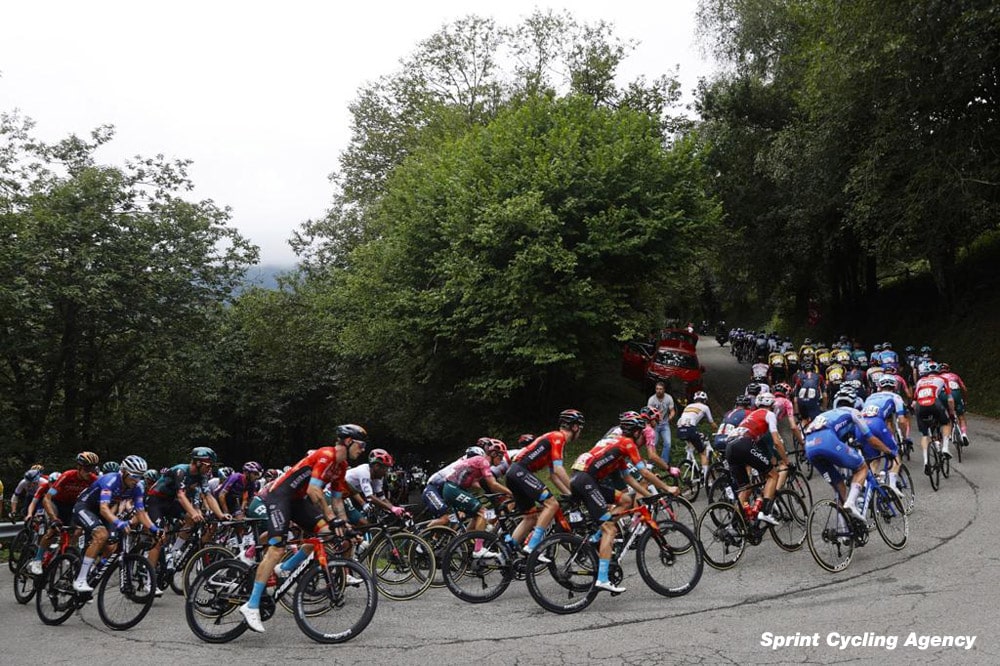 It was a day of climbing

The lead of the break remained stable for a long time at around 4 minutes, while Quick-Step Alpha Vinyl in particular set the pace in the peloton. Pedersen, who was first at the intermediate sprint and passed Sam Bennett in the battle for the green jersey, sat up in the leading group 17.5 kilometres from the finish. The remaining escapees started the Colláu Fancuaya, the last climb of the day, with a 3:40 lead. At the start of the climb, the gap had narrowed due to the work of Movistar and INEOS Grenadiers. 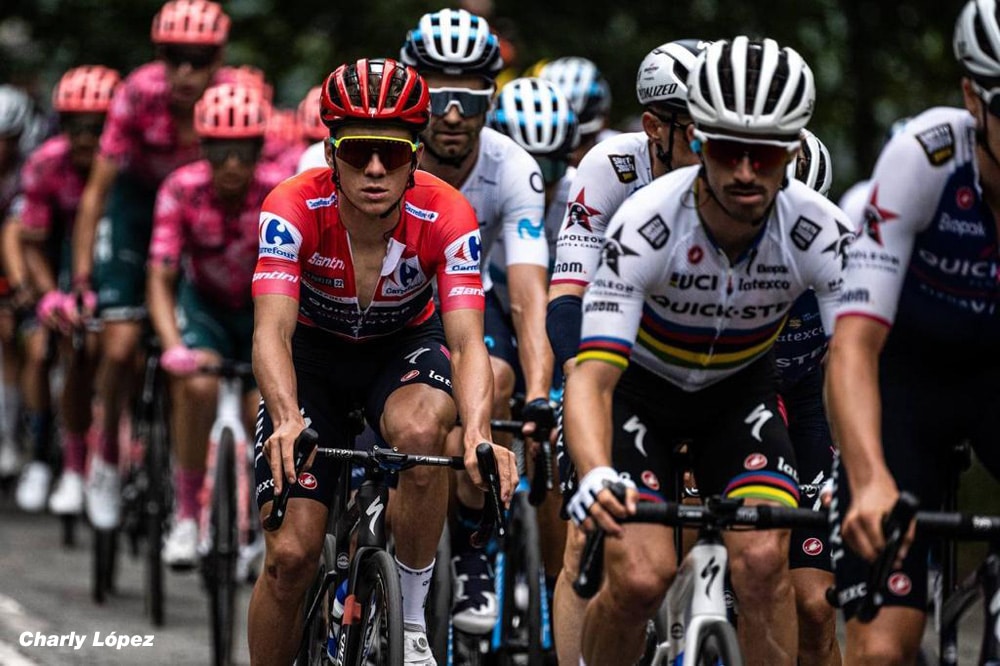 At 6 kilometres from the finish, Lutsenko accelerated and put Soler in trouble. However, it was Vine’s attack that decided the day. The Australian was initially had Pinot and Taaramäe on his wheel, but with 5 kilometres to go, the reigning World Esports champion was on his own. Behind him, Pinot, Taaramäe, and Soler got together, but they slowly but surely saw the gap grow further. A little later, Taaramäe had to let his two companions go. Then Pinot was dropped by Soler. 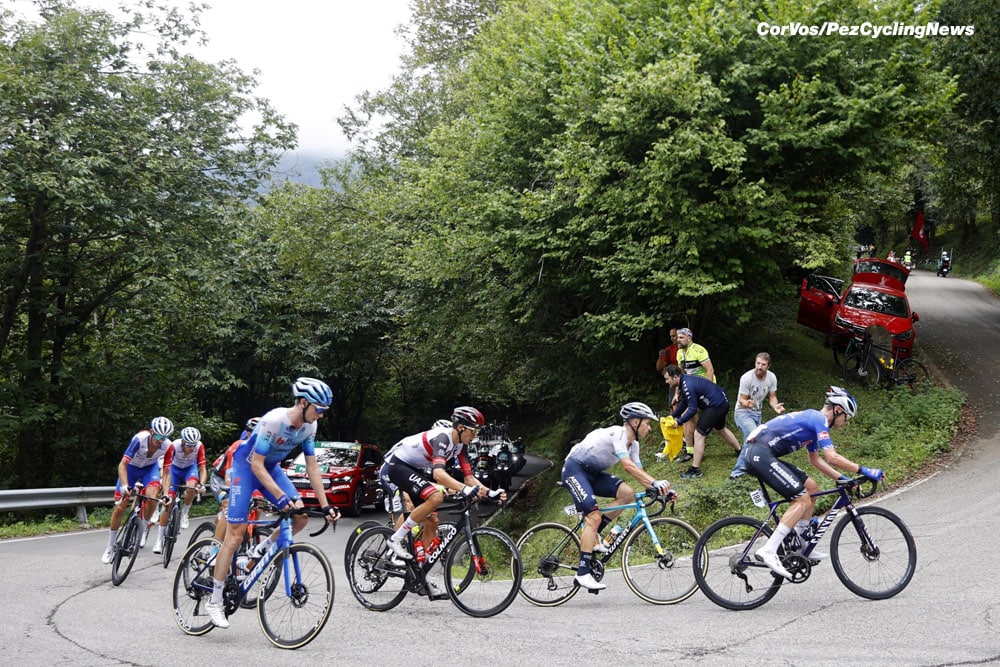 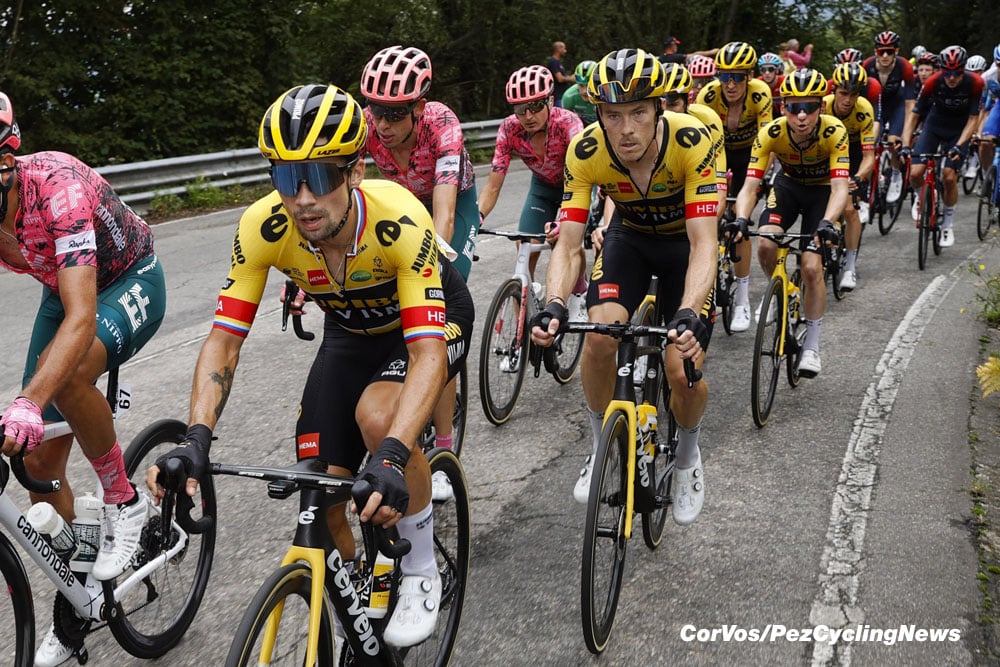 The victory was never in doubt. Vine didn’t have any problems on the foggy summit finish of the Collau Fancuaya, two days after his victory on the Pico Jano, for his second stage win of the 2022 Vuelta a España. At 43 seconds from Vine, Soler crossed the line in second, Taaramäe and Pinot were third and fourth. The red jersey wearer Evenepoel was fifth. The Belgian was the best of the favourites on the climb with Enric Mas (6th) and defending champion Primož Roglič (7th). 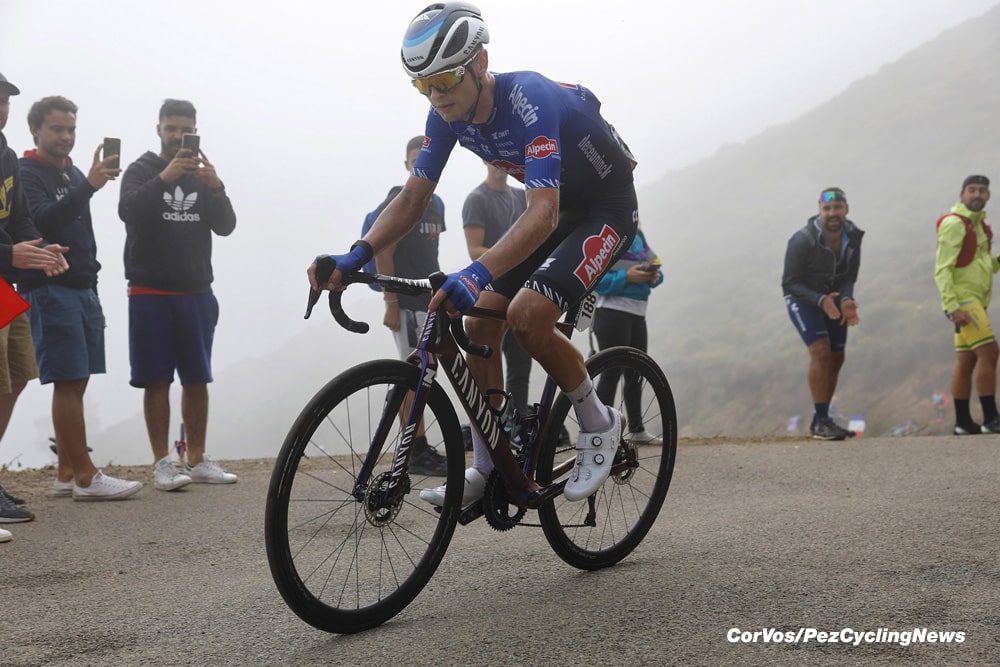 Jay Vine – Probably the strongest climber in the Vuelta so far 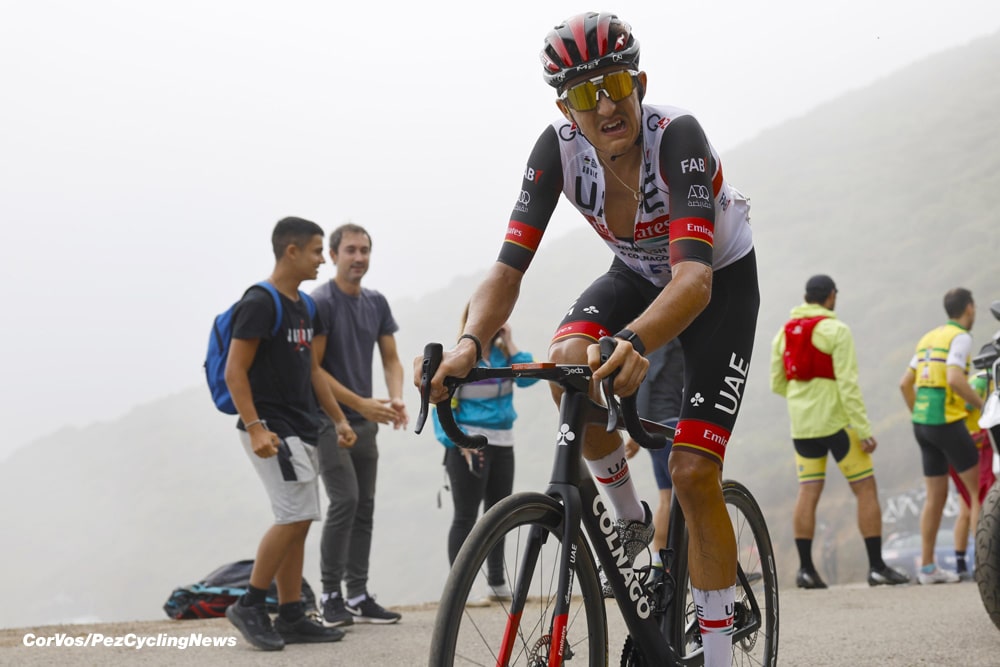 Soler was up and down again during the stage, but finished second

Stage winner and KOM, Jay Vine (Alpecin-Deceuninck): “On the first climb, I wasn’t sure we would be able to stay away, they seemed to be chasing pretty intently. I decided to target the first couple of KOMs. Then in the valley we had a really good group. The FDJ were three in the move and Quick-Step were controlling so I thought it was good to take the KOM points without too much struggle but the stage was still the main goal. Lutsenko did a starting move and I was sort of in this wheel so I decided to follow. After he pulled off, it was sort of a 25 minutes effort from there, similar to what I did two days ago. I decided to keep the pressure on. After a minute and a half, I kept going going to the next hairpin, I looked behind and there was no one. It’s incredible [to win two stages]. I think I’ve just got so much more confidence after that first one. I got that monkey off my back. I just enjoyed today. It was such a fun day!” 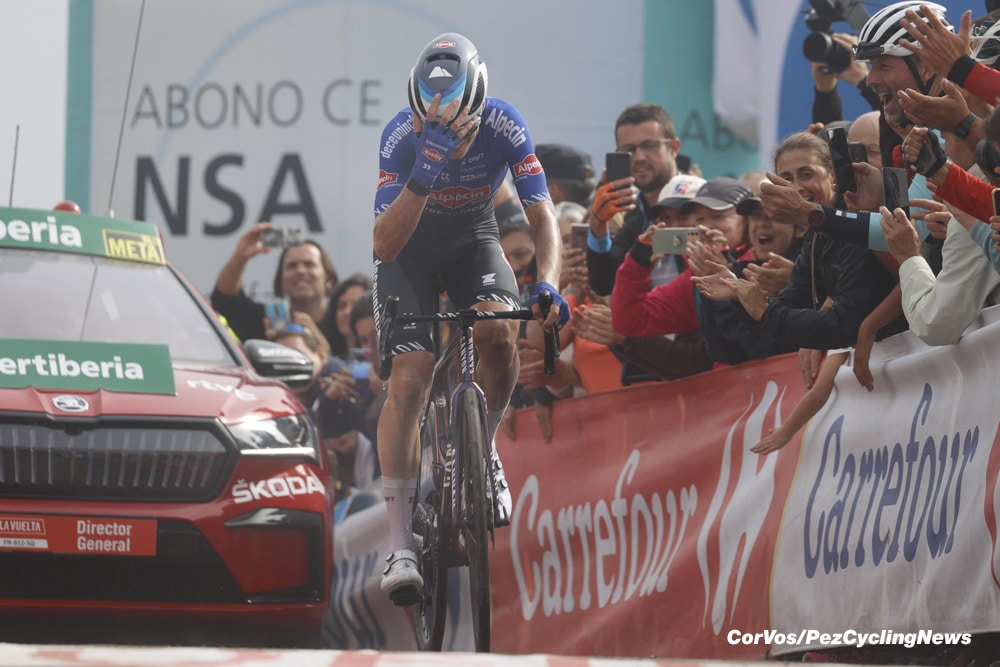 Even Vine couldn’t believe it

Overall leader and 5th on the stage, Remco Evenepoel (Quick-Step Alpha Vinyl): “I think I said that the goal was not to lose time and if there was an opportunity, to take time. I think I took time on a lot of guys except for the two most important ones, Primoz [Roglič] and Enric [Mas]. But it was good to see Primoz being really strong today, it’s nice to see him like this. It’s good for the race. I just did my best. My team was superb today, we controlled from the start, and it wasn’t easy! A big congrats to all my teammates, because they pushed me towards this result. In my radio, they try to explain me a bit the situation, but I think they were a bit behind. At one moment, they told me I was with fourteen guys but we were only four or five. I didn’t really know what the situation was. In the last km I saw we were only Primoz, Enric and Rodríguez, so a perfect day. I’m really happy with how I felt today. I hope I can recover really well because tomorrow I will need super fresh legs again. What I saw from the past is that there weren’t really big gaps, but if you explode it’s completely done for sure on a climb like that. I’m gonna keep the confidence. I know it’s a climb that suits me very well in duration, so I’m just gonna give my all. My team is very strong. We’re going to try to keep the jersey and why not to go for a stage win, that would be really nice.” 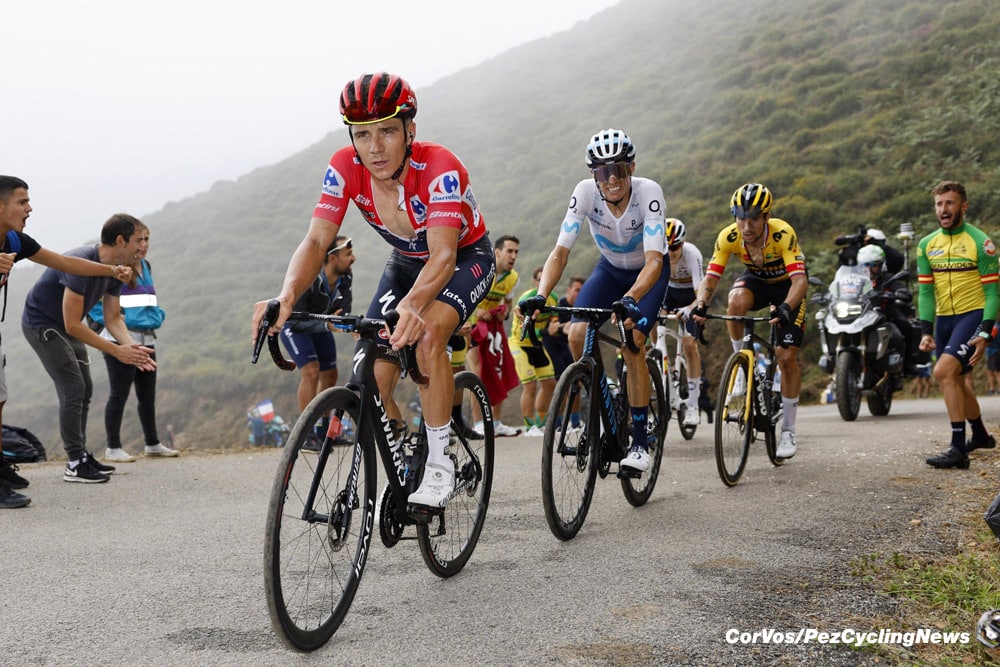 # Keep it PEZ for all the Vuelta action from Spain. #

Nerd Alert: How to beat a World Record with Dan Bigham