Vuelta Stage Report: The slim South African, Louis Meintjes, powered up the final steep climb to the finish to take his first Grand Tour stage. Behind the break, Remco Evenepoel left the other GC men in his dust on final climb to add time to his overall lead before the second rest day. The young Belgian now has over one minute all his competitors.

The final kilometre of stage 9

Louis Meintjes won the ninth stage of the Vuelta a España. On the steep final climb of Les Praeres, the South African climber was the best of the break. Remco Evenepoel strengthened his lead in the general classification after he broke away from his opponents on the last climb.

Another day in red for Remco Evenepoel

Fernando Escartín: “Extremely tough stage to conclude the first week of racing. Riders will climb four mountain passes before arriving at Les Praeres, the Mirador del Fito being one of them. The finale will take place at the Nava summit, which we discovered in La Vuelta 18. An authentic wall – short and very explosive – made up of four kilometres that will measure the strongest riders’ true abilities.”

The 171.4 kilometre ninth stage from Villaviciosa to Les Praeres had an uphill finish after a short but steep final climb. Before the riders started the 3.9 kilometre climb with gradients of up to 24%, they had four climbs: one Cat.1, one Cat.2 and two Cat.3. It would be a day of two battles, one for the stage and one for the GC. 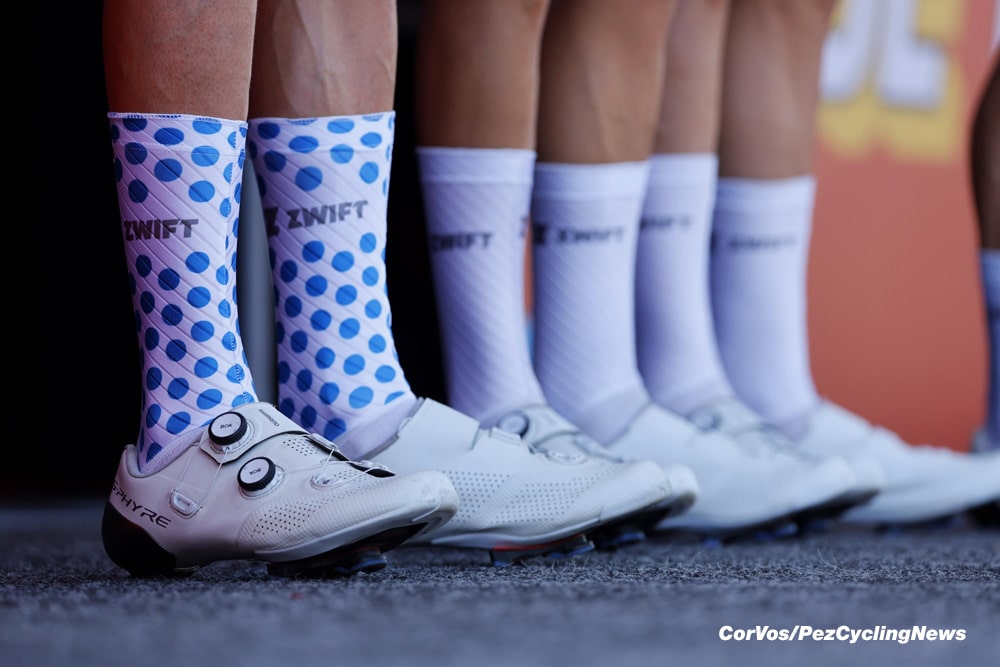 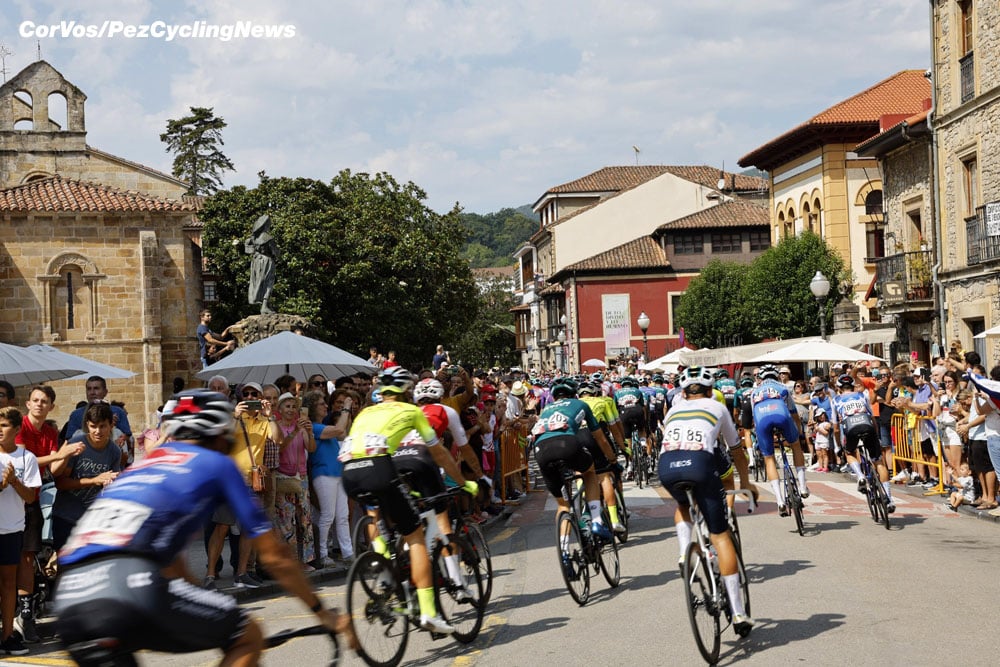 The peloton leaves the start town of Villaviciosa

Sepp Kuss (Jumbo-Visma) was unable to continue due to illness, while Wout Poels (Bahrain-Victorious) and Pieter Serry (Quick-Step Alpha Vinyl) had positive covid test. The pace was very high from the start and it took a long time before the break of the day was established. Only after 44 kilometres a leading group of ten men were able to build their lead, while the peloton eased off. 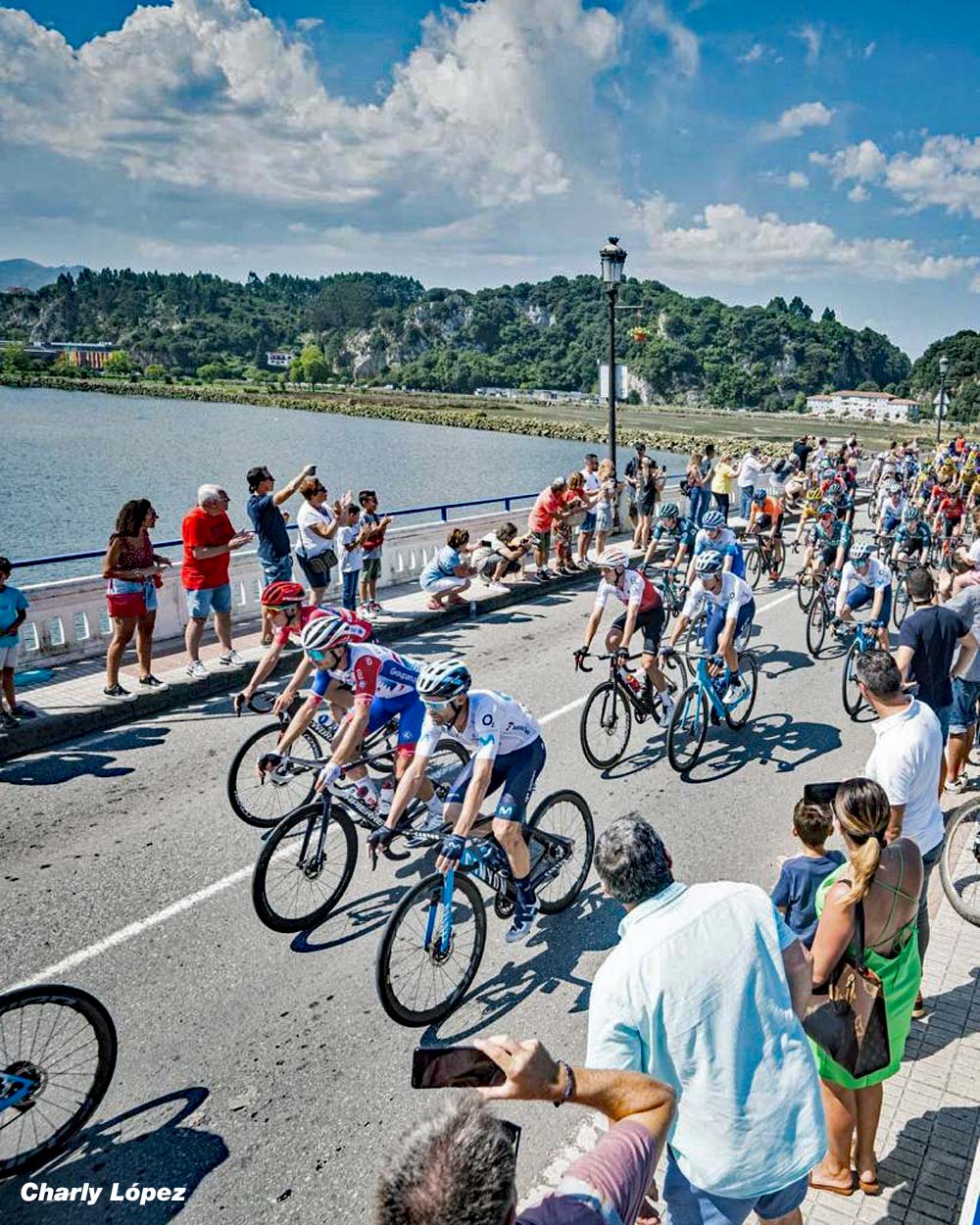 The first part of the stage followed the coast 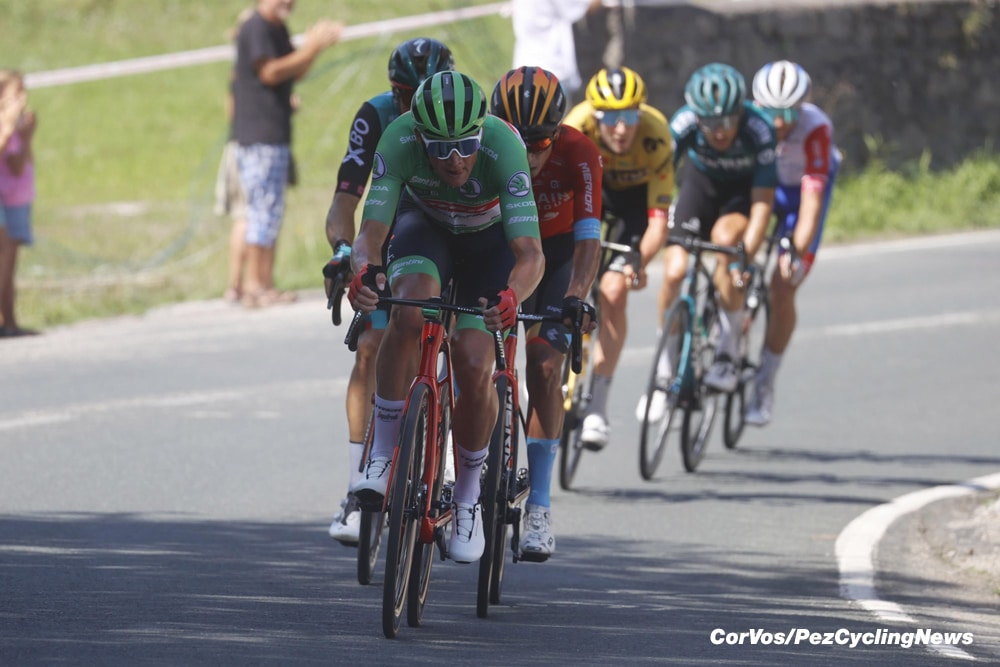 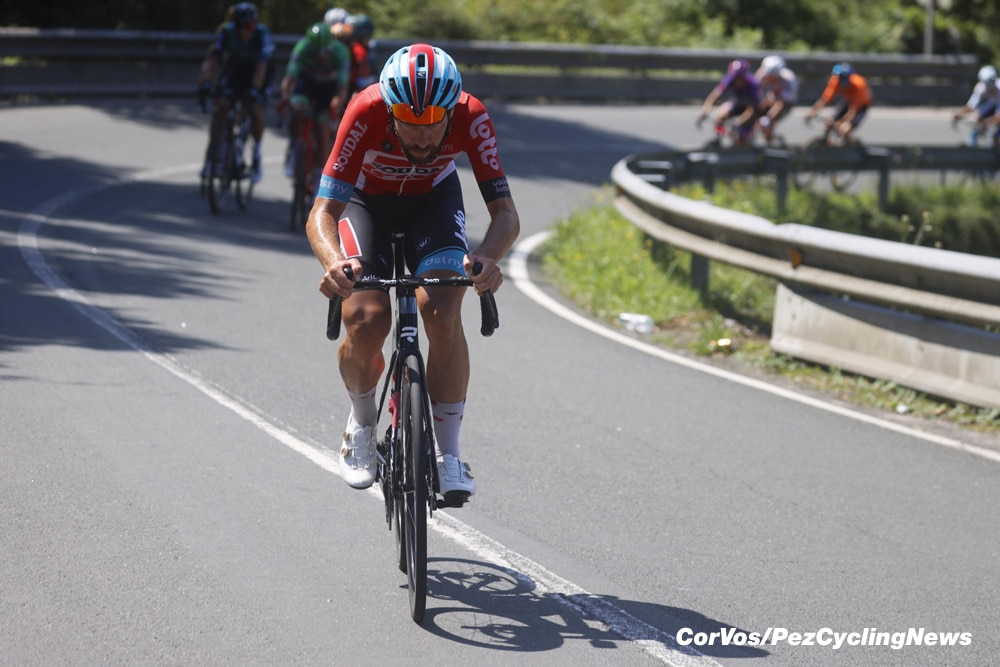 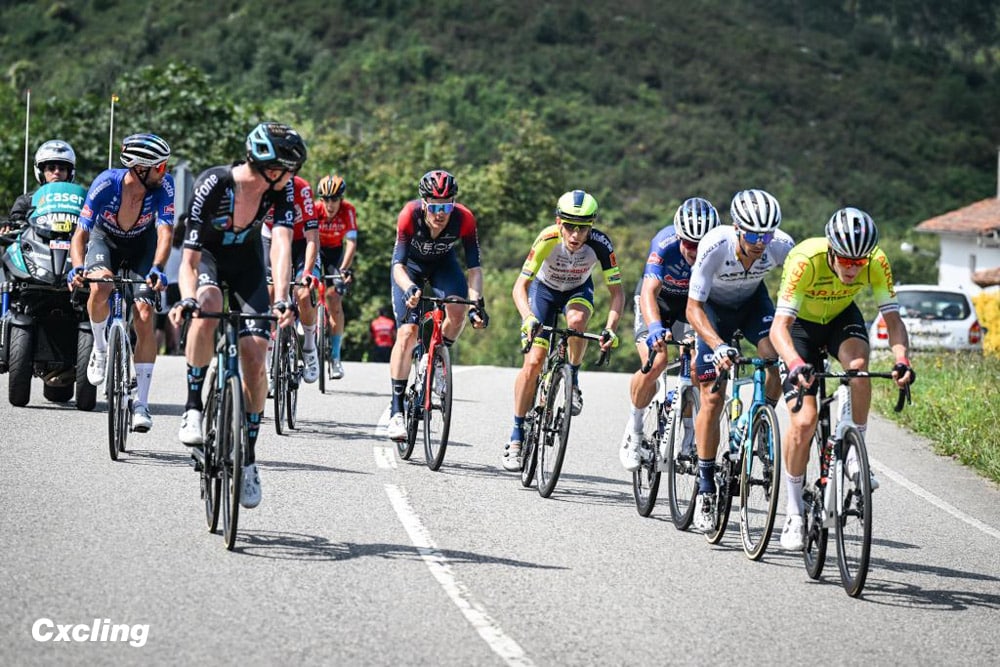 The ‘break of the day’

At 12 kilometres from the finish, Conca and Janssens attacked from the leading group and only Battistella could get across to them. Two kilometres later Janssens tried again and this time only Battistella could follow. They started the final climb together. There, the Belgian was stronger than his Italian fellow attacker. Meintjes proved to have ridden the climb at his own pace and passed the others to ride solo with 2.5 kilometres to go. 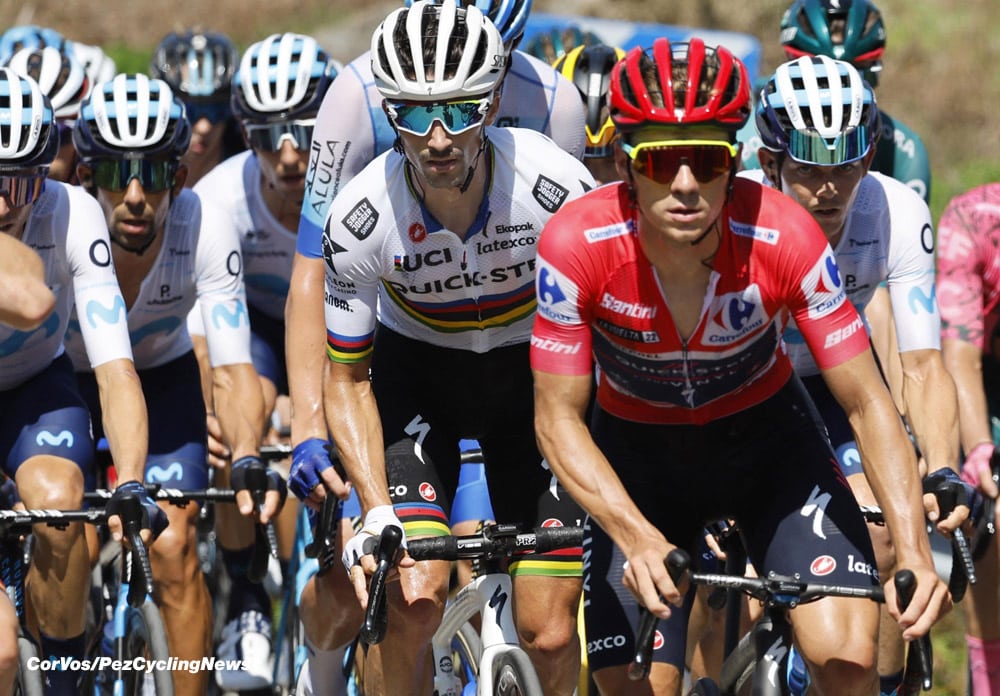 Evenepoel had his ‘luxury domestique’ Alaphilippe at hand 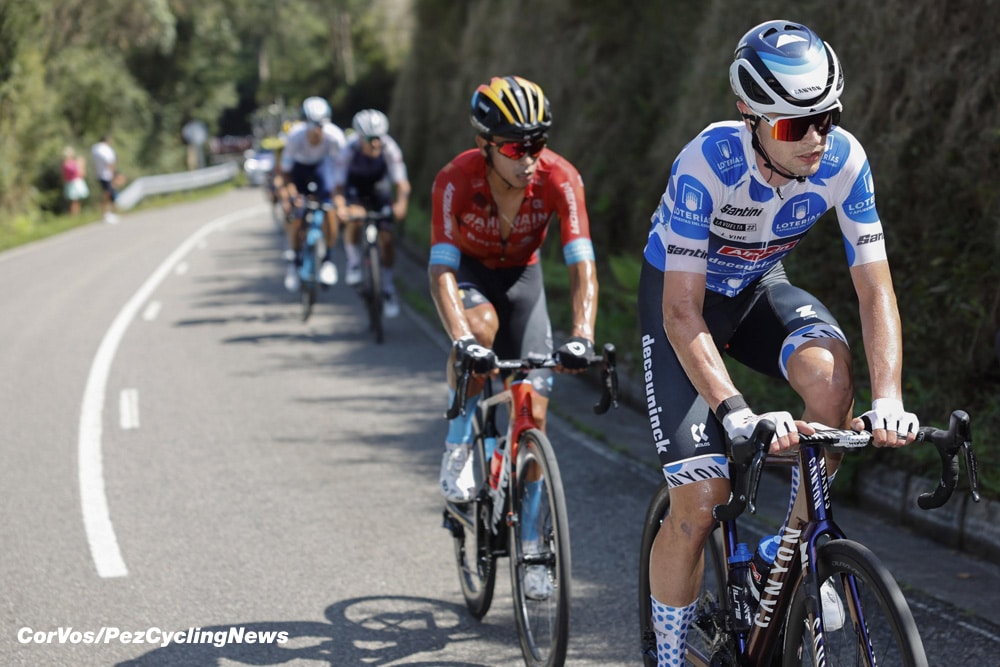 Jay Vine wasn’t in the break, so not much chance collecting KOM points

Meintjes had nothing to fear from the other behind him and was about 2 minutes ahead of Remco Evenepoel, who had ridden away from his competitors on the steep monster of a climb. The Belgian was on his way to further extend his lead on the general classification. Meintjes took the victory after 171.4 kilometres. This was the first WorldTour victory for the 30-year-old South African. 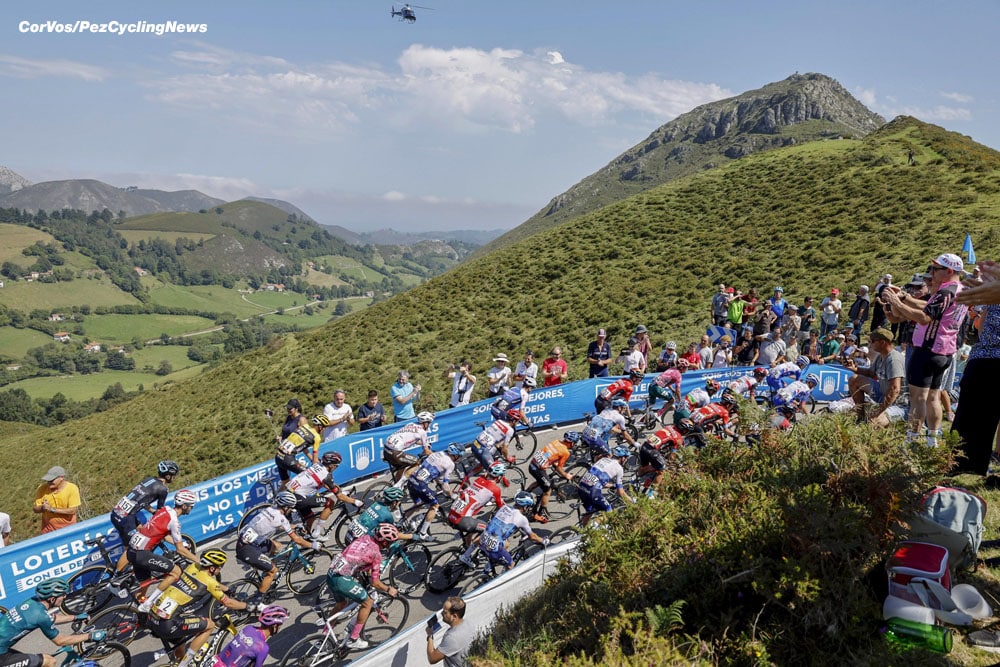 Stage 9 was all up and down 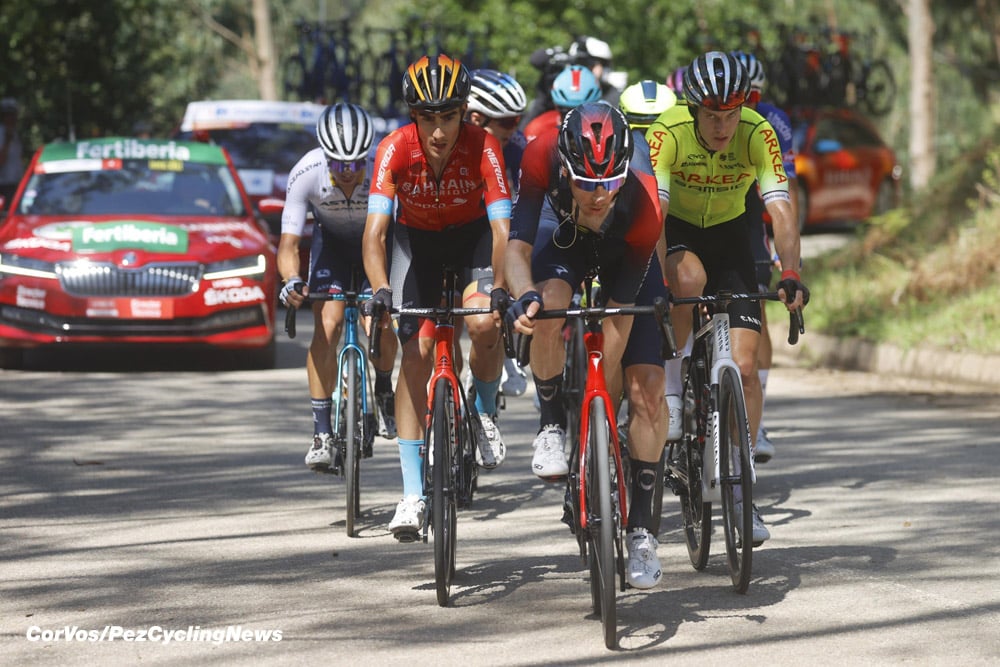 Battistella crossed the line a minute behind in second, Zambanini was third a little later. Evenepoel was fourth at the finish; the Belgian put timed into all his competitors. On Enric Mas he took 44 seconds, on Primož Roglič 52 seconds. 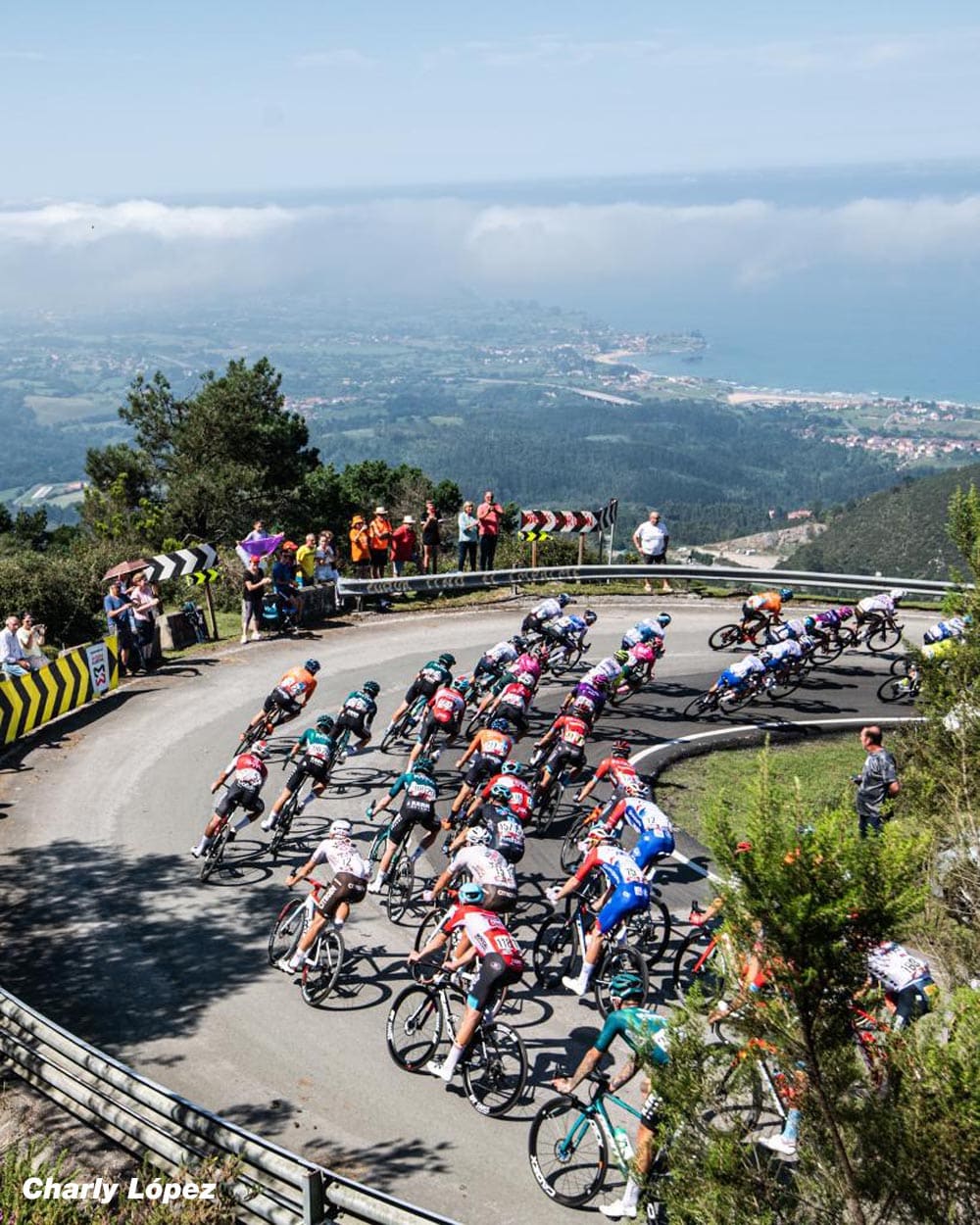 The stage worked its way back to Villaviciosa before heading inland to the finish in Les Praeres. Nava

The break was not allowed more than 5 minutes

Stage winner, Louis Meintjes (Intermarché-Wanty-Gobert): “It’s something special. I’ve never been on the podium of a World Tour race except for a team classification so that was one of my main goals before stopping my career. The last few days, I was just not quite fast enough in the mountain finishes to keep up with the GC guys. If I can’t a result that way, the best was to go in the breakaway and it worked out perfectly. Today I was quite lucky. My team controlled in the start and I only needed to try one time. It was quite a hard day and [the other breakaway riders] made me work harder. I knew I was also spending more energy than a lot of guys. I was not sure I would still have the best legs. I knew it was a really hard climb so it was better to just time trial to the finish. It’s really special [to join Robert Hunter as the 2 South-African stage winners of La Vuelta].” 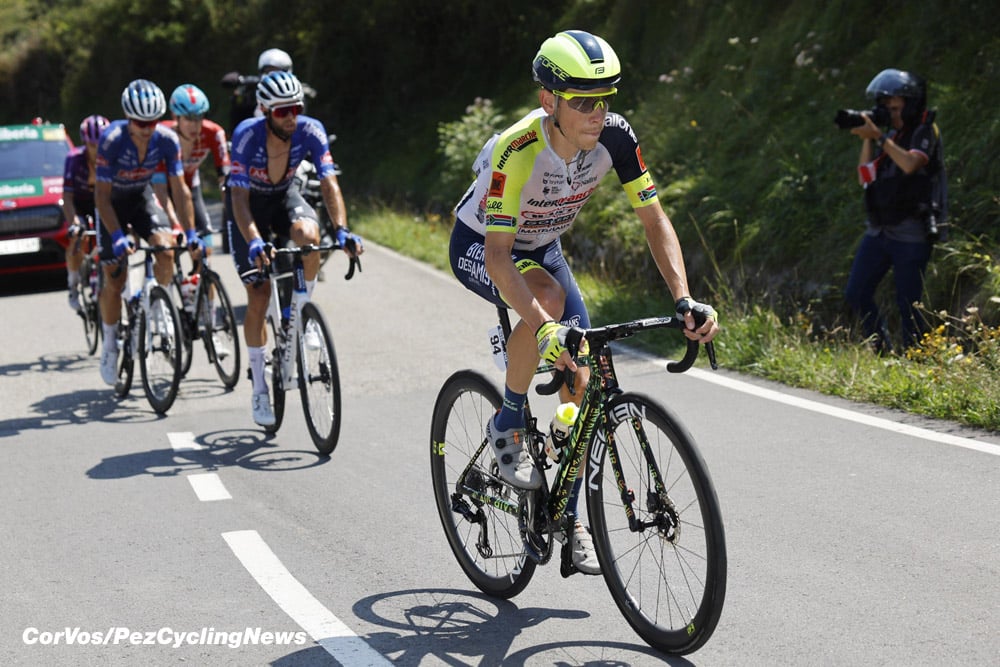 Louis Meintjes took the climb at his own pace, it was too much for everyone else 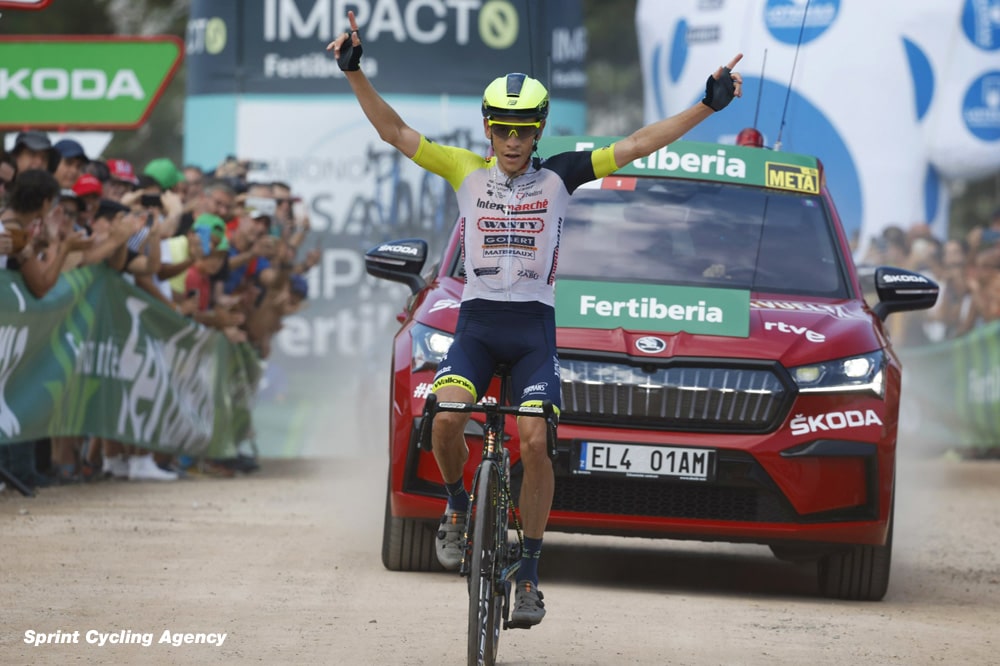 Overall leader, 4th on the stage and Best Young Rider, Remco Evenepoel (Quick-Step Alpha Vinyl Team): “We had a plan to actually try to let the breakaway go, so the bonifications would be gone in case we lose time. I think the team did perfect, with this morning’s bad news of Pieter [Serry]’s positive test. I think the team took the responsibility again like real gentlemen. We did communicate very well all together. Dries [Devenyns] said that he was not feeling great today, so he took the first pulls and then if was up to Julian [Alaphilippe], Ilan [van Wilder] and me to come into this climb. If you saw what they did again… I’m really impressed by my team. I’m so happy with the guys, it actually makes me a bit emotional seeing this guys working their hearts out for me. To be honest, I already felt super tired, but when you feel the legs, everybody feels them. In a climb like this, it’s all about the power, there’s no drafting or anything because it’s too steep. When Klaas [Lodewyck] was finally back in my earpiece and told me that I was riding one minute away from everybody… it gives you so much motivation, you can’t even imagine. I’ve been going through so much already in my life and this is why I can keep fighting and suffering. Everything I’ve been through two years ago really made me a new person. I really didn’t expect to go to the time trial with this lead. Like I said, I’m really emotional in a good way. I have just no words anymore for the guys, they really deserve a few rest days. This is the best team in the world, really.” 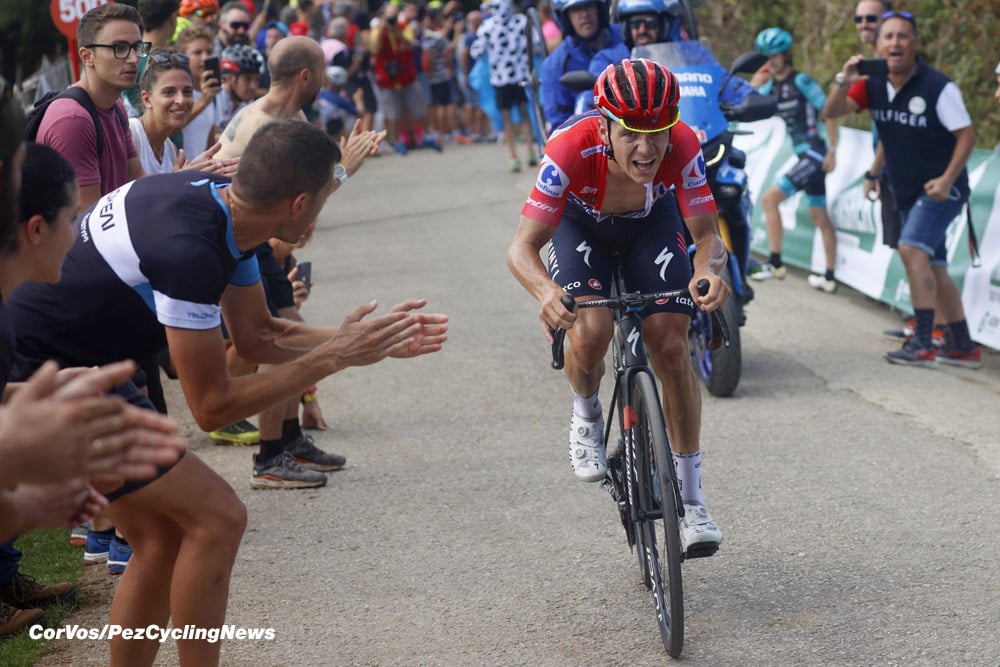 With a stunning performance, Remco Evenepoel left everyone on the steep final climb

# Stay PEZ for all the Vuelta a España catch ups in EUROTRASH and the ‘Rest Day Round Up’ on Monday. #

Disgruntlement as Primož Roglič cedes more time in the Vuelta a España, while other GC riders share their own anger

Disgruntlement as Primož Roglič cedes more time in the Vuelta a España, while other GC riders share their own anger

Coryn Labecki out of Road Worlds after fracturing collarbone, rib