Vuelta Stage Report: Young Dutchman, Thymen Arensman took his biggest win on the monster climb of the Sierra Nevada. Behind; the GC men all attacked the red jersey of Remco Evenepoel, but the Belgian weathered the storm to only lost a few seconds going into the last rest day of this Vuelta a España.

The final kilometre of stage 15

Thymen Arensman won the Queen Stage of the Vuelta a España. The Dutch DSM rider was the best on the Sierra Nevada, where the finish was on Alto Hoya de la Mora at over 2,500 metres altitude. Enric Mas and Miguel Angel took second and third places. Remco Evenepoel had to let Primoz Roglič ride away from him in the finalé, but lost only 20 seconds.

Race director: Fernando Escartín: “Pure mountain stage, over 4000 metres of slopes in total. The stage will take off from the Province of Jaén, where the heat will, undoubtedly, play an important role. The second half is very tough, with climbs up the Alto del Purche and the Hoya de la Mora – a long, demanding mountain pass that was a La Vuelta 17 highlight.” 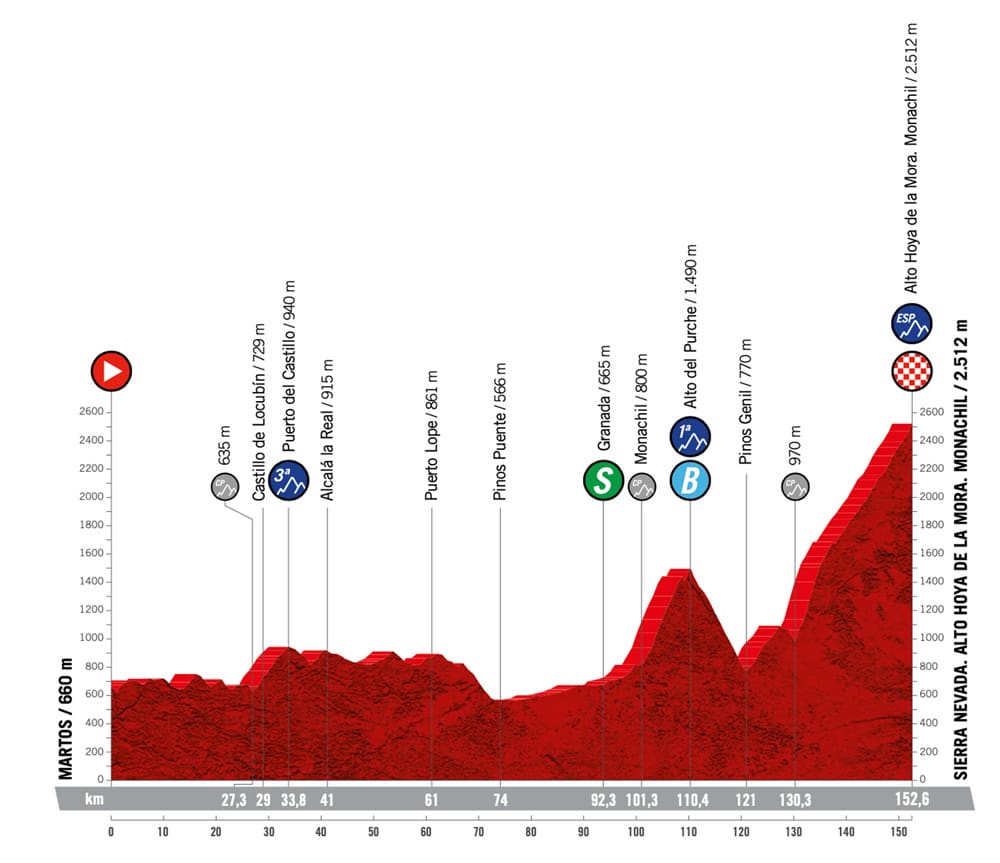 Sunday saw the Vuelta a España peloton tackle the Queen Stage of 2022. The riders started the fifteenth stage in Martos, for a 152.6 kilometre stage that finished in Sierra Nevada. There were two climbs on the course, but the tough final climb to Alto Hoya de la Mora was the main obstacle. 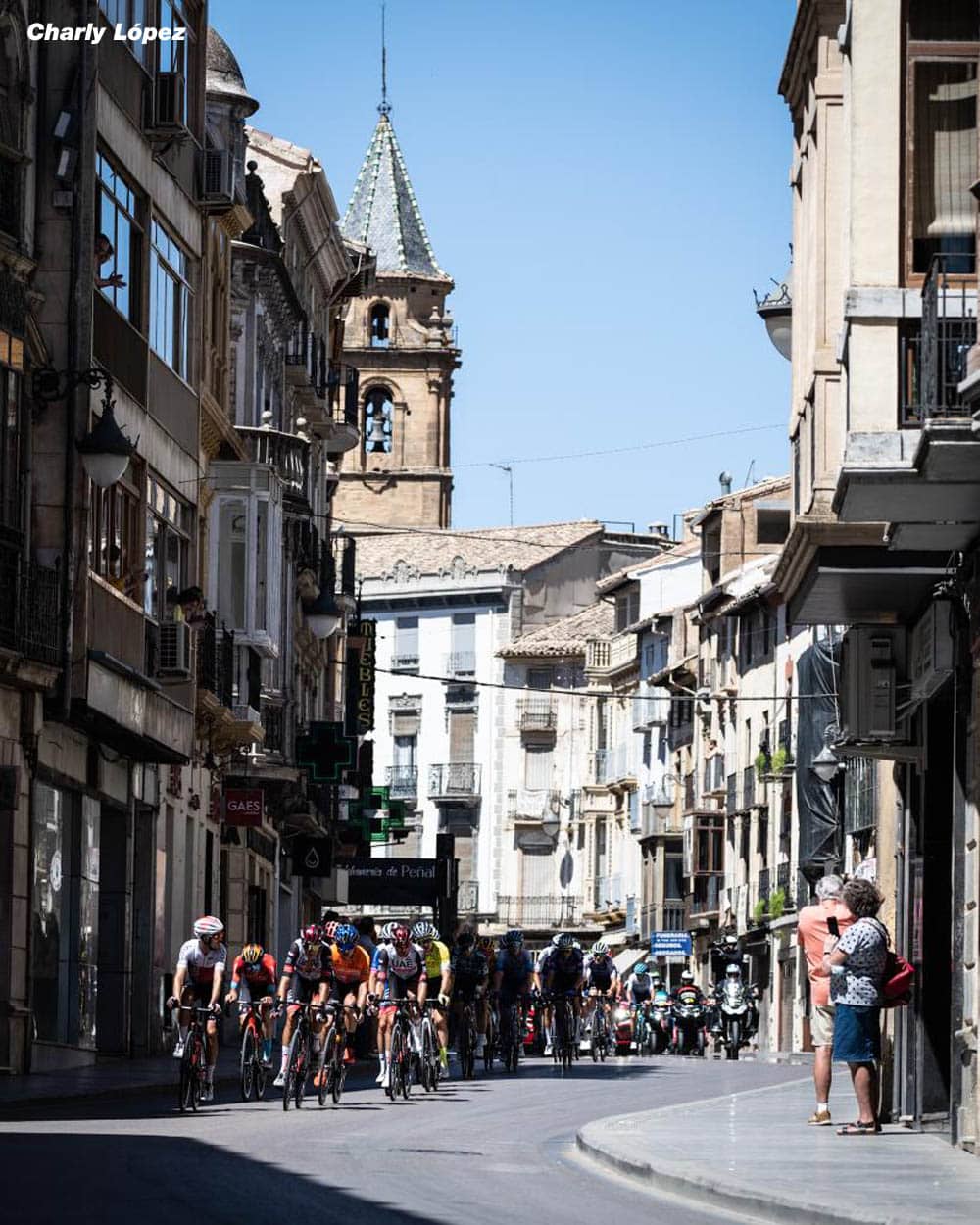 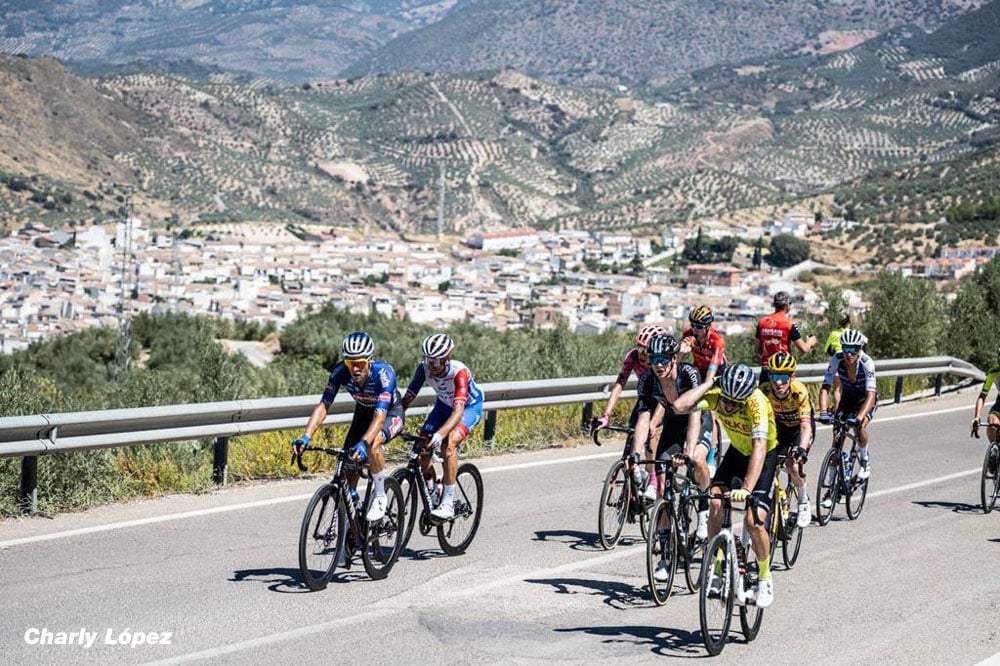 There was a big battle for the break

In total, there was 29 riders in the break. Only Lotto Soudal, Equipo Kern Pharma and Burgos-BH had no rider in the front group. Red jersey wearer Evenepoel had two teammates in the leading group with Masnada and Vervaeke, but second placed Roglič also saw Dennis and Oomen go with the escape. In the peloton, Quick-Step Alpha Vinyl took the lead after the break had gone. The pace of Quick-Step wasn’t that high and the front riders were able to take 6 minutes. 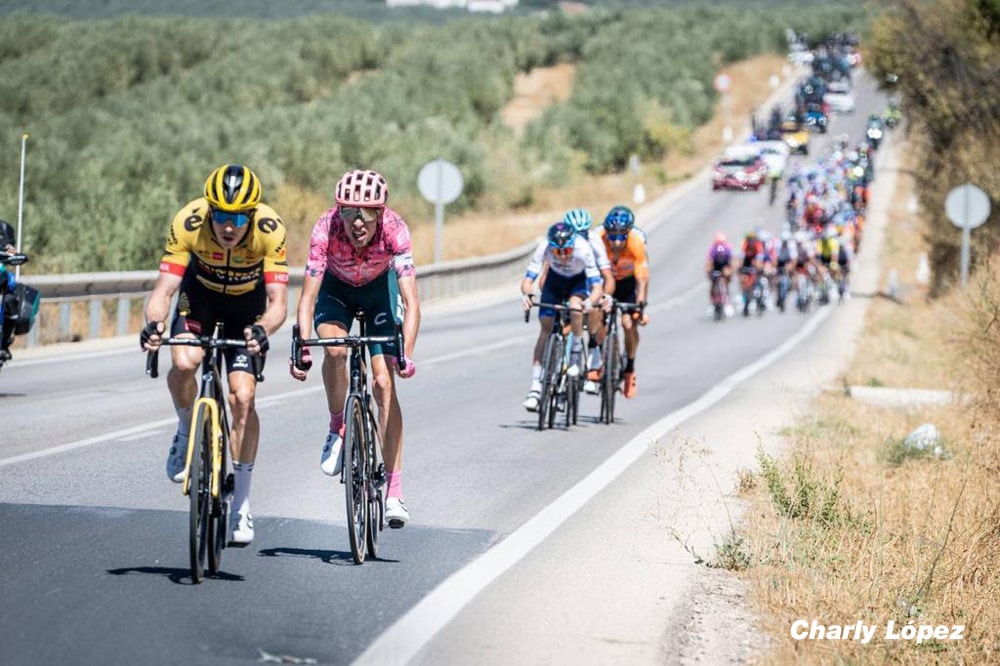 Dennis, Nibali and Carthy started it off

At 78 kilometres from the finish American Craddock decided it was time to jump away from the leading group. The BikeExchange-Jayco rider rode away from the large group for a minute lead. In the peloton: Ben O’Connor (AG2R Citroën) put a teammate on the front of the peloton. The Australian realised that there were a number of riders in the break that could jeopardise his Top-10 ranking. 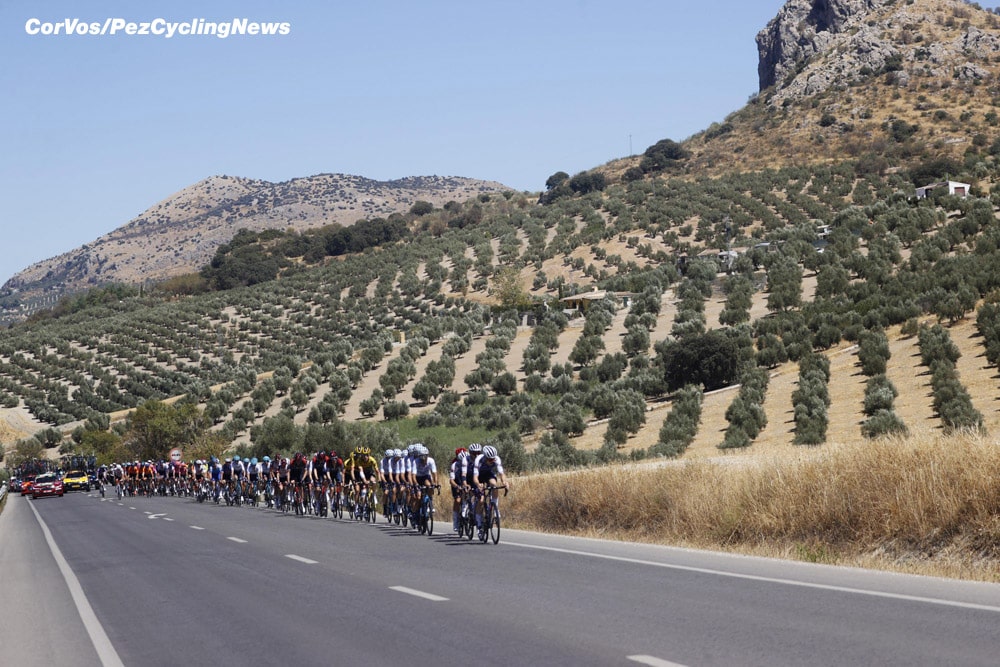 Craddock, who was still riding alone, took full points in the intermediate sprint in Granada. The green jersey, Pedersen was able to take 17 points, to increased his lead in the points classification. The peloton also crept closer to the big break, thanks to the work of the AG2R Citroën riders. The Alto del Purche (9.1km at 7.5%) was the first important climb of the Queen stage. The Cat.1 climb was very uneven with some sections rising above 10%. Craddock started the Alto del Purche with a minute lead, the peloton was already 3 minutes behind the second group due to Jumbo-Visma, who helped set the pace in the peloton. It caused a painful moment for Ilan Van Wilder, the young Belgian super servant of Remco Evenepoel could not keep up with the pace and had to let go just under 50 kilometres from the finish. 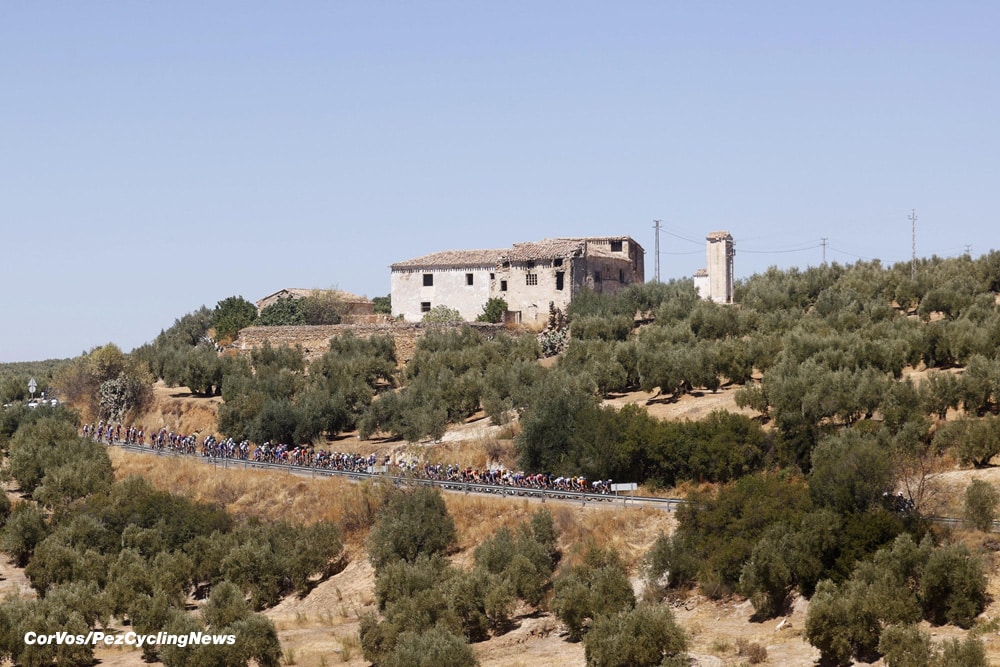 Once the big break had gone, things settled down in the bunch

Evenepoel ended up alone on the Alto del Purche, the penultimate climb of the day. The best climbers had separated themselves from the rest in the leading group. KOM Vine went in search of Craddock in the final kilometres, hoping to take the 10 points at the top. 200 metres from the top he was able to make the connection. Relief for Vine, the same was true for Evenepoel. Van Wilder had found his second wind and was able to rejoin and move up in the pack. After the top of the Alto del Purche, Vine and Craddock were togther to the foot of the final climb of the Sierra Nevada. The duo couldn’t hold out, at 27 kilometres from the finish they were caught by the chasing group. In the peloton, Roglič had a problem with a dropped bottle, but the Slovenian was able to rejoin the group. 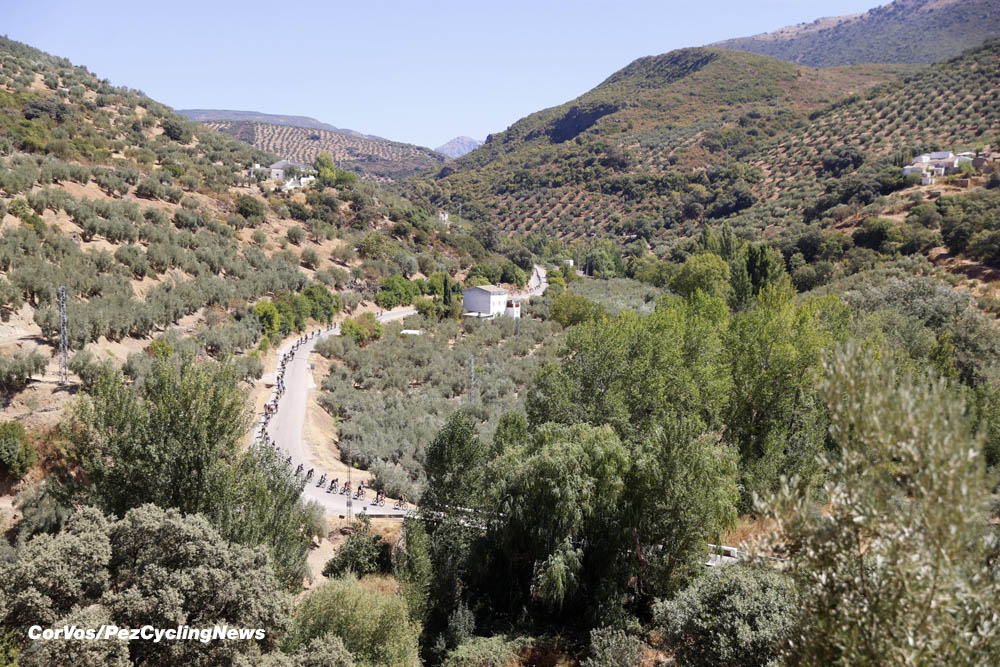 Would it be a race on two fronts again? 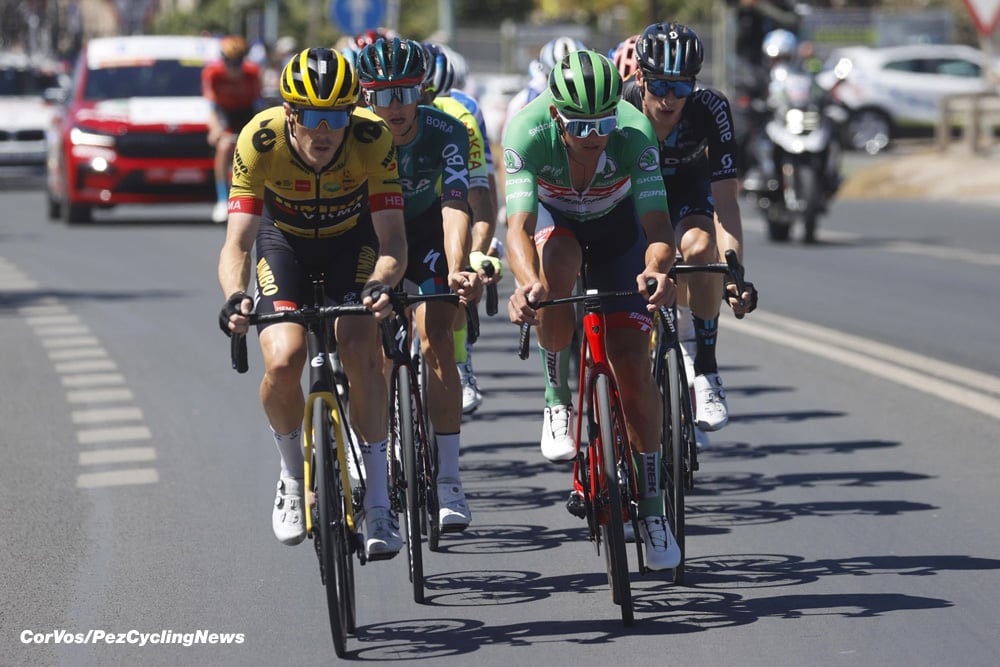 The green jersey of Pedersen was in the break again 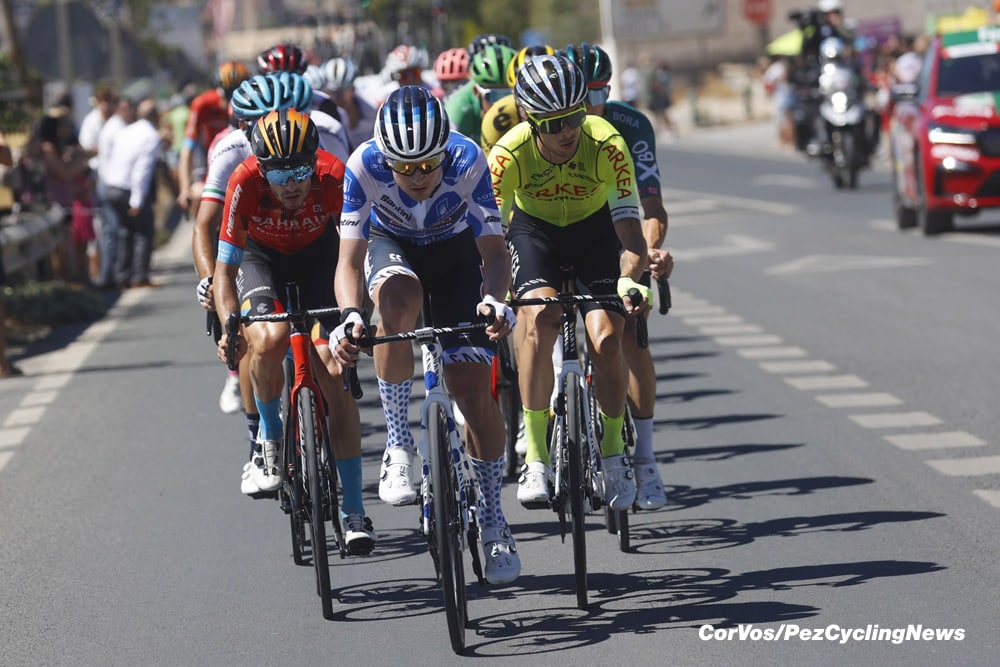 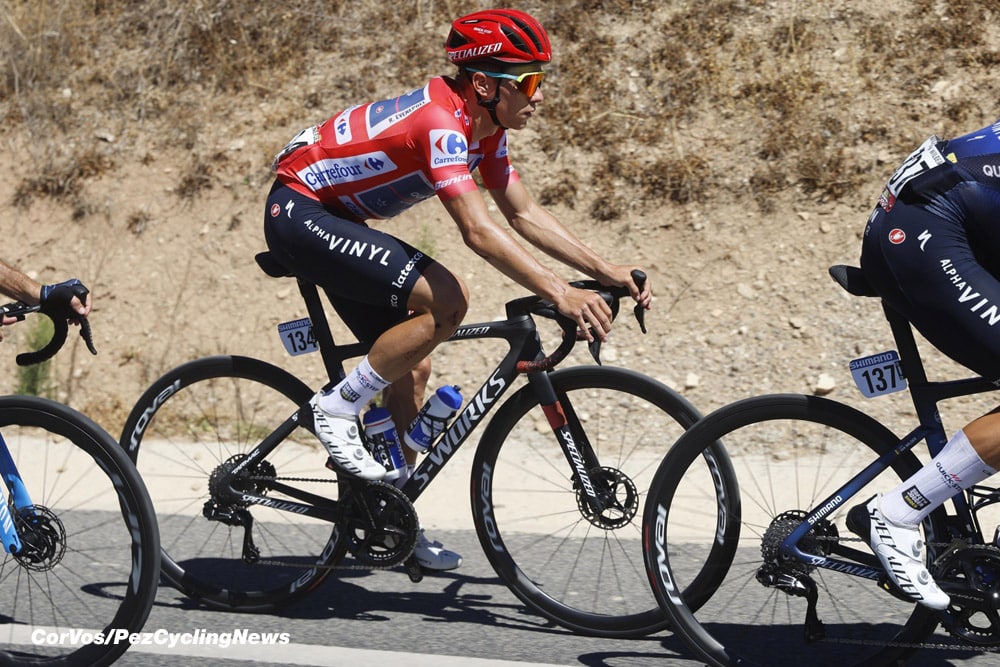 Can Remco Evenepoel hold the lead? 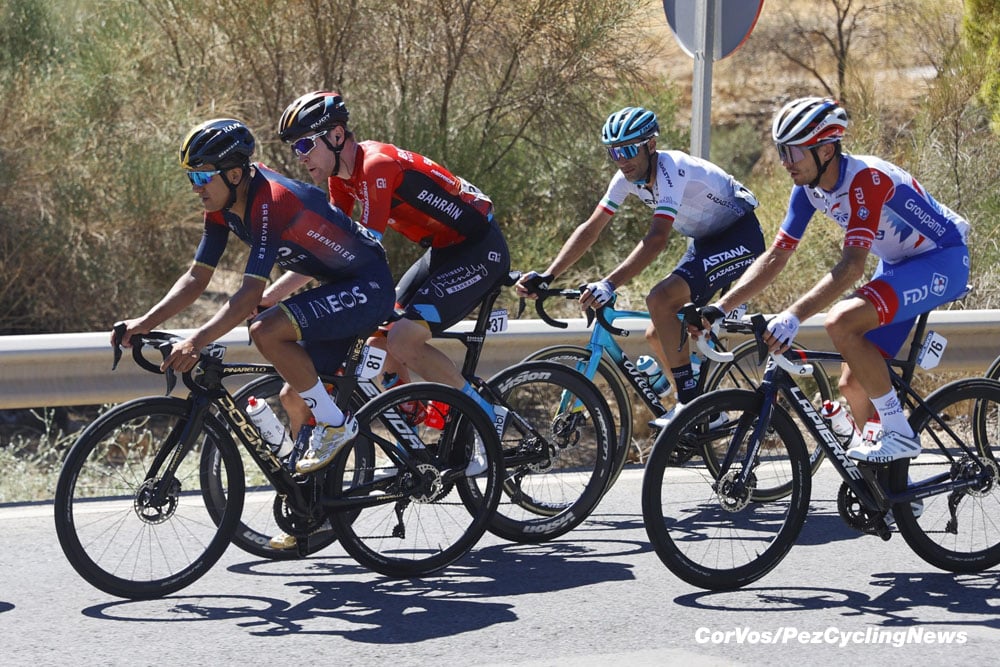 Carapaz looking for stage win No.3 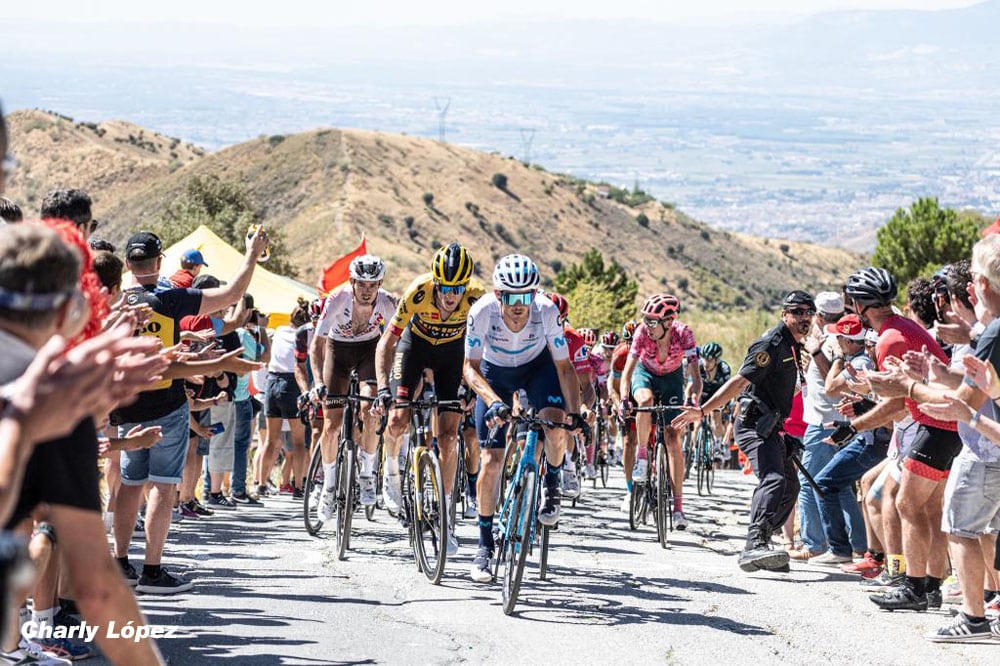 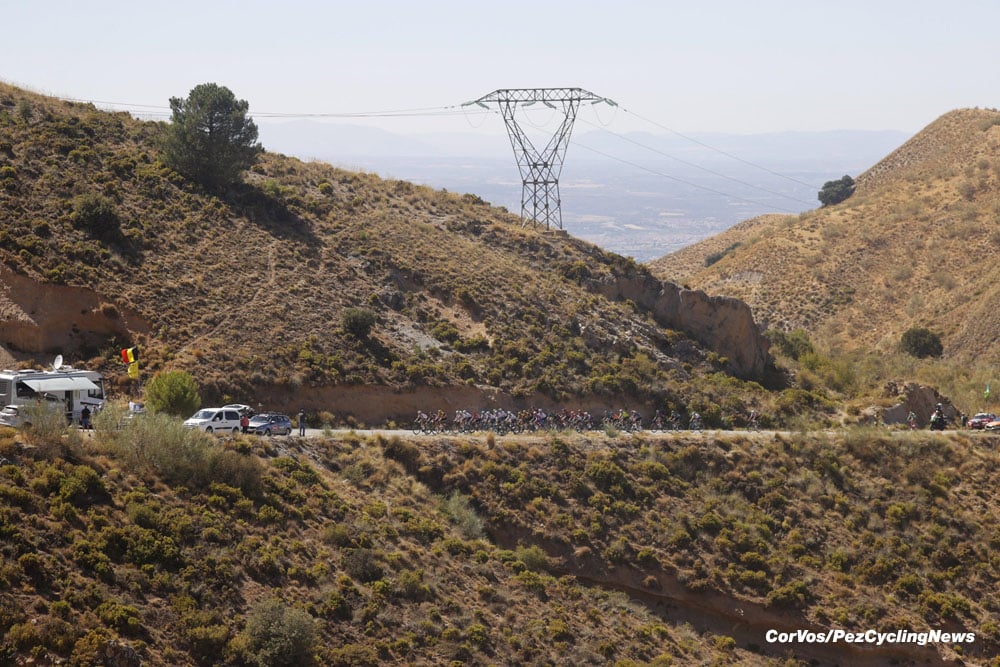 The climb of the Sierra Nevada goes on forever 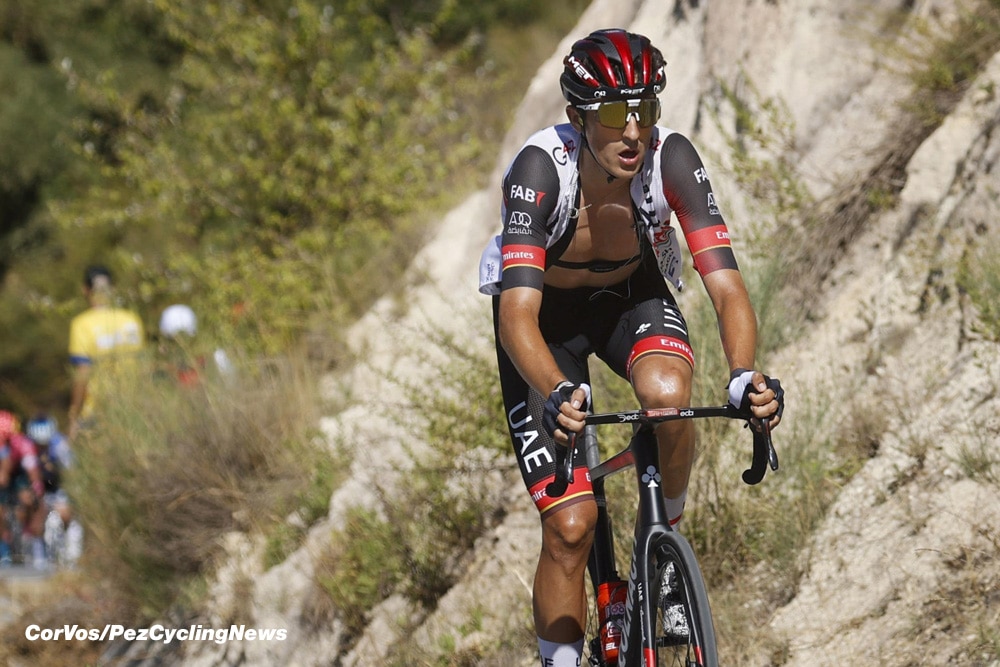 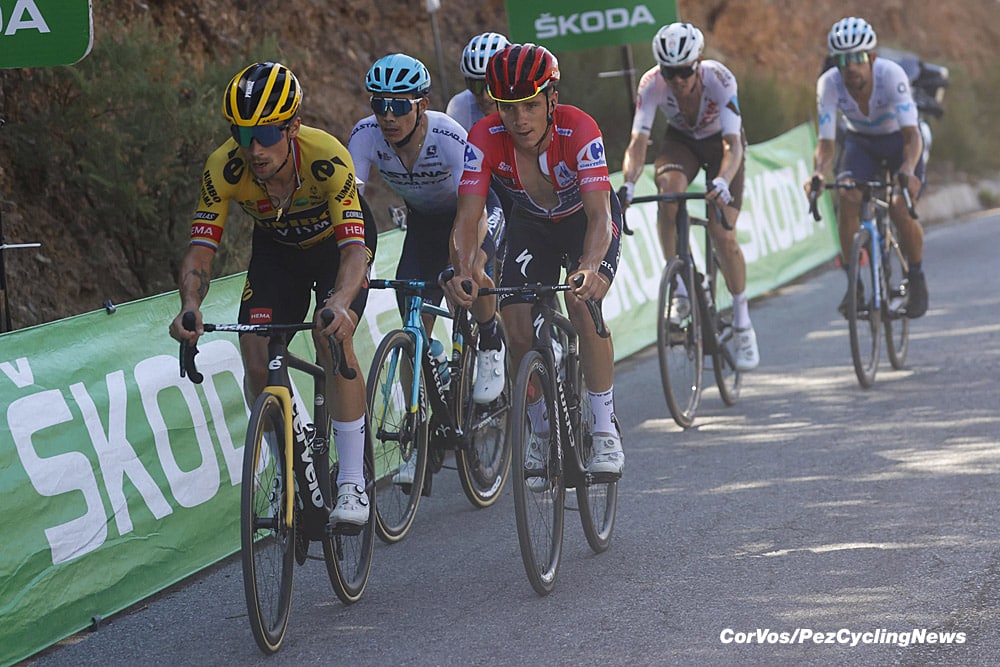 The top GC men were watching each other 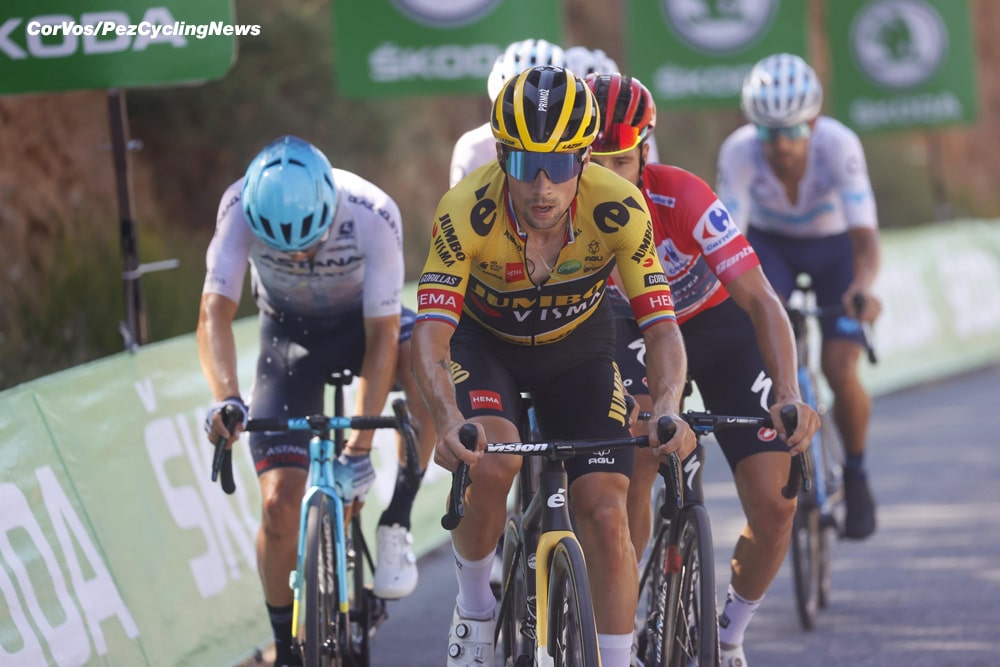 Roglič was waiting for his chance

Stage winner and 8th overall, Thymen Arensman (DSM): “It’s hard to believe, it really has to sink in. I can’t believe it on the queen stage of the Vuelta. Everybody was talking about this stage. To be honest, I didn’t feel super good during the stage but apparently the others felt the legs even more. When I was alone, I stopped listening the coach Matt Winston on the radio. I only kept thinking I gotta push, push above 400 watts. It was enough and it’s unbelievable. It looked like Marc Soler was waiting for me, and I thought he’s such a great rider, I don’t know if I can take him on. But then I accelerated on a steeper part. He cracked and I was like: ‘ok, everybody is really on the limit and maybe I have something left.’ It’s unbelievable.”

Overall leader and Best Young Rider, Remco Evenepoel (Quick-Step Alpha Vinyl): “Yes, for sure [it has been a better story than yesterday]. It’s actually my first time finishing so high, so I think I did quite well. Jumbo did actually a really good race, my team as well. The start was really hard again, a bit of a strange breakaway. After, I felt a bit stiff from the crash, but it’s getting better every day. So, I’m really happy that it’s a rest day tomorrow and I actually lost almost nothing. A good day for us. Yeah, as I said, with the crash it was not so easy to handle, but the third week is a bit of another story. The climbs are not super super hard anymore. I think yesterday I had a pretty s*** day, today it was better and in the end I almost lost no time. I had to do the whole climb, then Primoz [Roglic] attacked me 2km to go… He’s in his right. I managed it very well.”

# All the Vuelta news in EUROTRASH and the Rest Day Round Up on Monday. #

Licence plates for cyclists will not be happening after all