Vuelta Stage Report: On the medium mountain stage 18 to the Alto del Piornal, the overall leader of the 2022 Vuelta a España, Remco Evenepoel, smashed the opposition to take the honours of the day and add a few more seconds to his lead. Enric Mas was second and Robert Gesink had the win ripped from his hands in the final kilometre.

The final kilometre of stage 18

Remco Evenepoel grabbed the win on Vuelta stage 18 to the Alto de Piornal. After a stage of 192 kilometres he was first across the finish line. He held off Enric Mas and early break rider Robert Gesink. The Dutchman was only caught by the GC favourites 500 metres from the finish.

The race leaders at the start

Race director, Fernando Escartín: “This will be a tough and very beautiful stage, especially in its final part. Its second half will feature the climb of the Piornal, which will take place along three different slopes. First by the Desesperá, then by the Monastery of Yuste and lastly by the Jerte Valley. This will be a day for the favourites and their teams to work on their strategies if they want to shake up the general classification.”

The first 100 kilometres of the stage was over undulating terrain, but without any real climbs. As a result, it was possible for a break to succeed. Groups with João Almeida, Jai Hindley, Chris Harper, Sergio Higuita and birthday boy Jetse Bol tried, but failed. 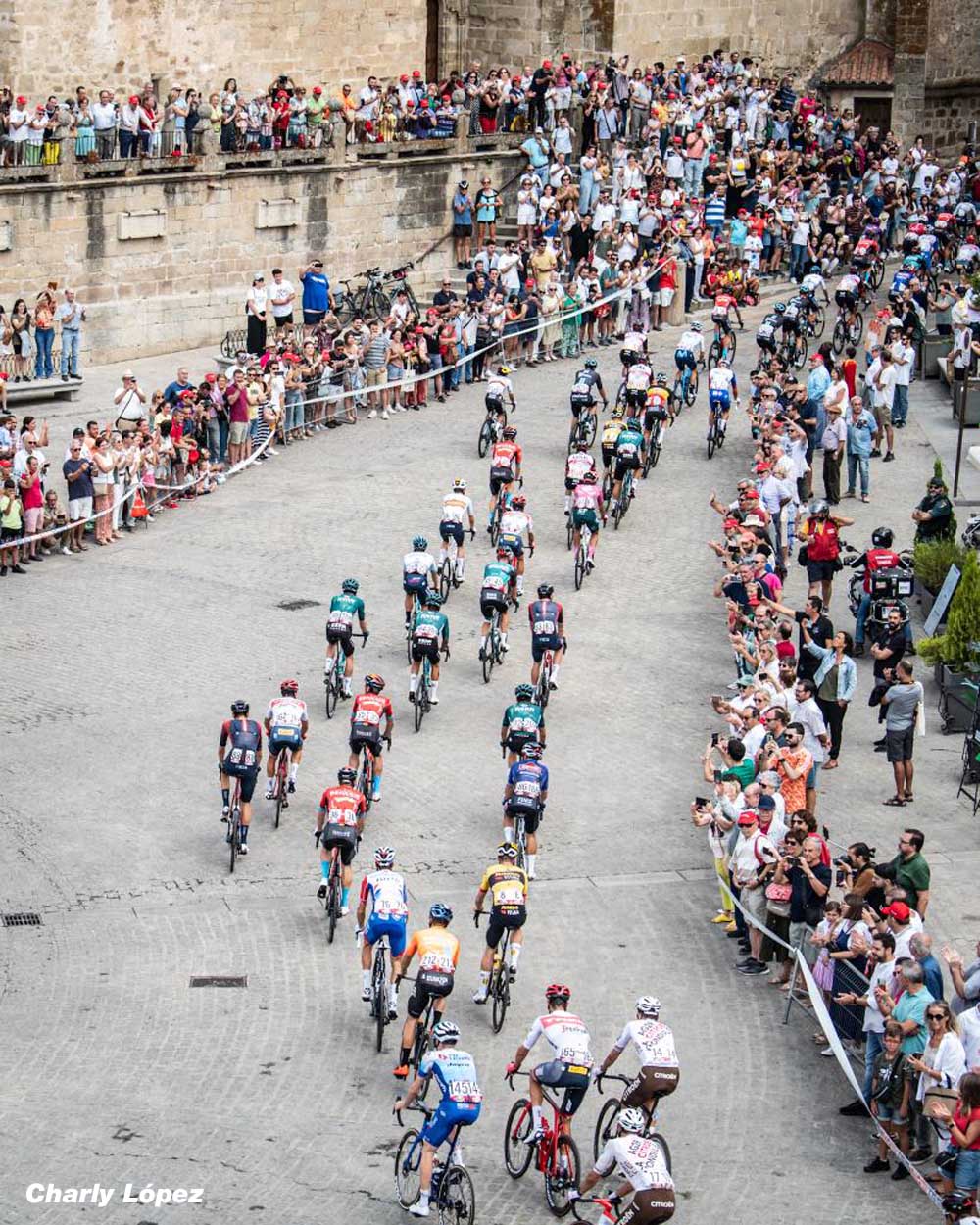 The first time la Vuelta has been to Trujillo

The action for a place in the early break was full on. After more than 20 kilometres, KOM Jay Vine and 4th overall, Carlos Rodriguez were involved in a big crash. For the Australian of Alpecin-Deceuninck it was the end of his Vuelta, INEOS climber Rodriguez was able to continue, but was badly battered. 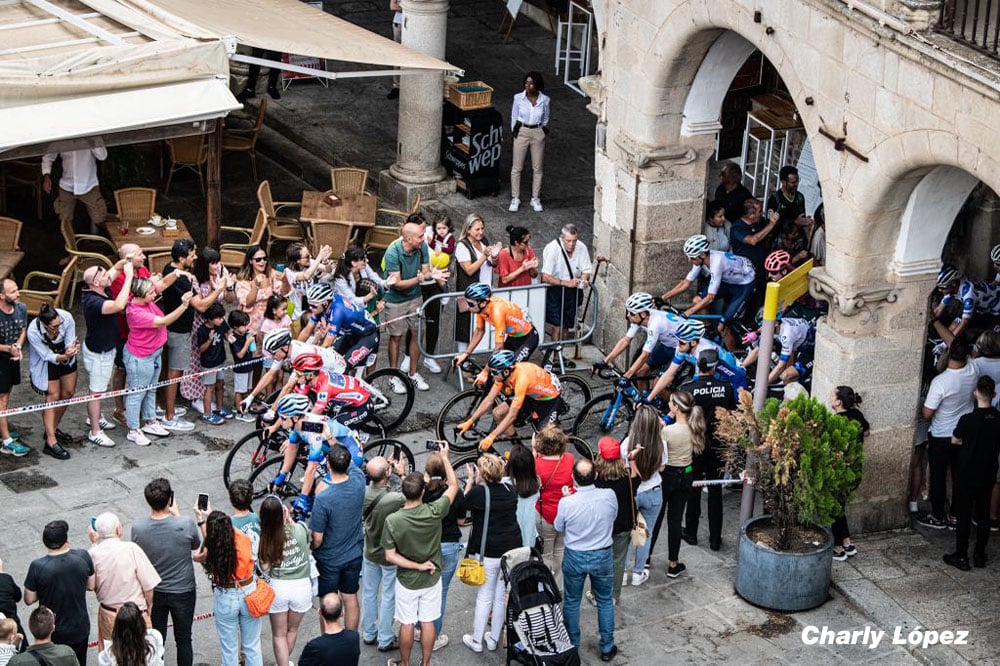 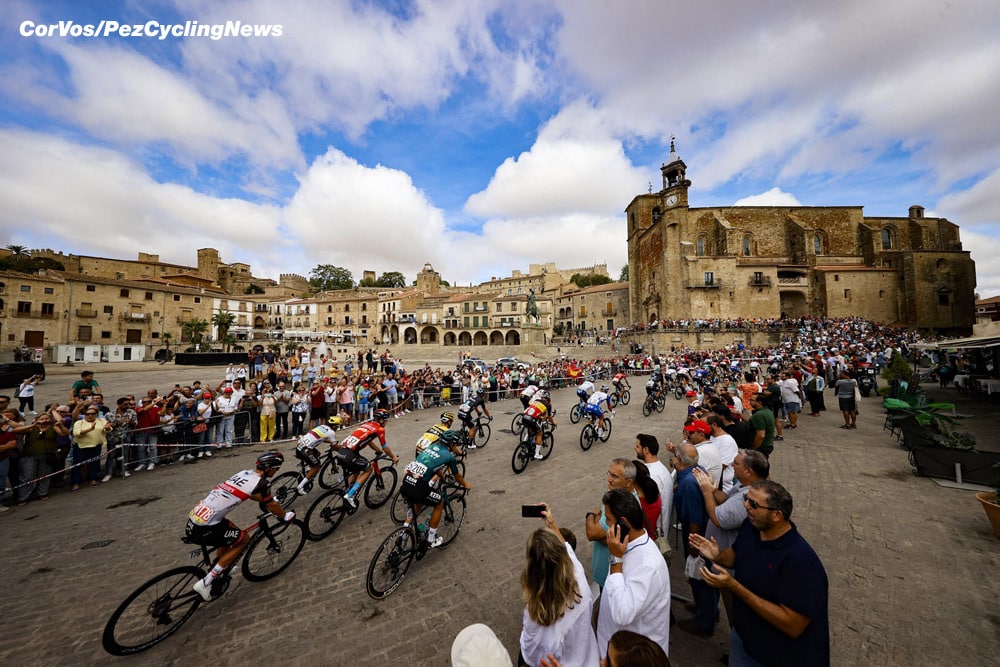 In no time the escapees had more than 8 minutes. Carapaz was the best placed rider at 26:20 from Remco Evenepoel. The climber from Ecuador was, due to Vine’s abandonment, now the leader of the mountains classification. When the lead was 9 minutes, UAE Team Emirates started to help with the chase. 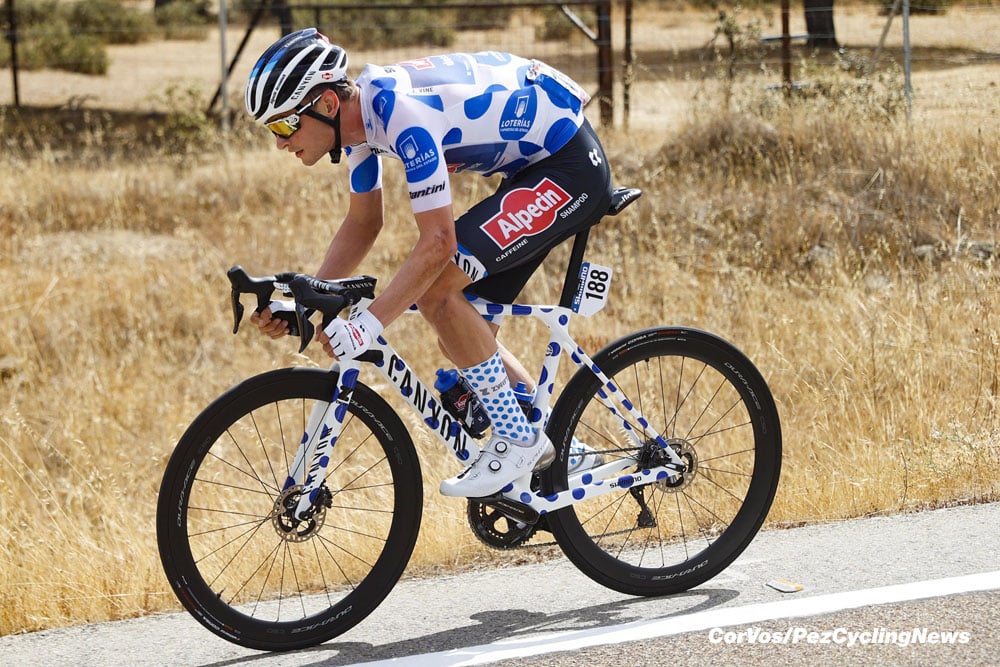 Jay Vine was looking like he would take the KOM jersey all the way to Madrid, but he had to abandon after a crash

Before the first climb of the day to Desesperá (3.7km at 9.4%), João Almeida attacked with Brandon McNulty. The Portuguese rider, 6th overall at 6:51, quickly took one and a half minutes and forced Quick-Step-Alpha Vinyl, Movistar and Astana Qazaqstan to chase. It turned out to be an all-or-nothing attack that was clever, because on the top of Desesperá, Ivo Oliveira was waiting for his leader. 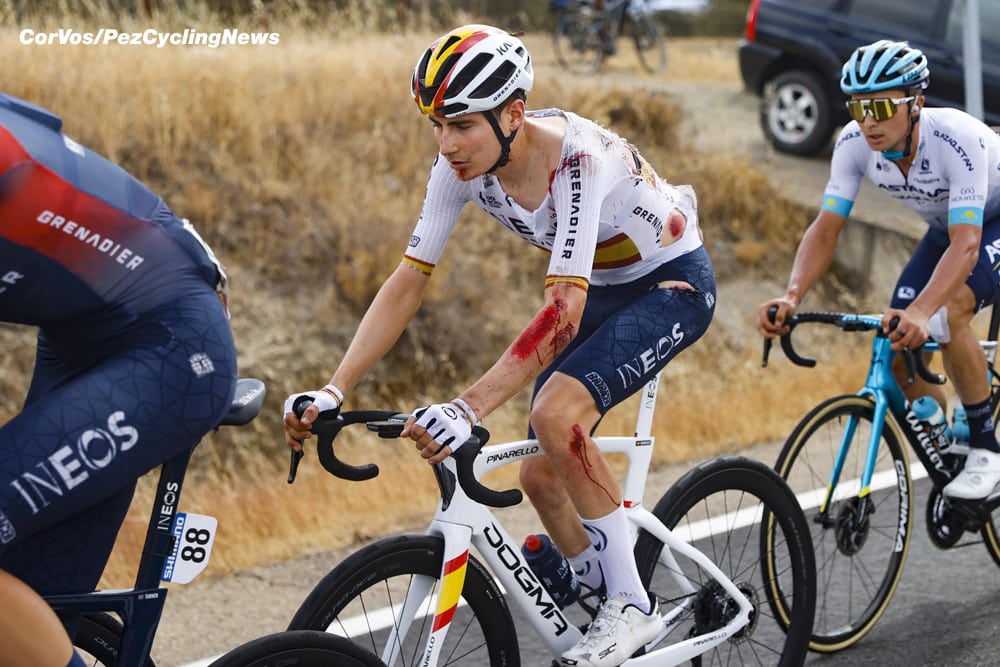 Almeida and Oliveira came within 4 minutes of the leading group, where the co-operation was not the best, and kept the thinned peloton at about 1 minute. There it was mainly Astana and Movistar who chased for Miguel Ángel López and Enric Mas. Towards the second climb of the day, the Alto de Piornal from the eastern side (13.5km at 5%), Almeida lost some of his lead. 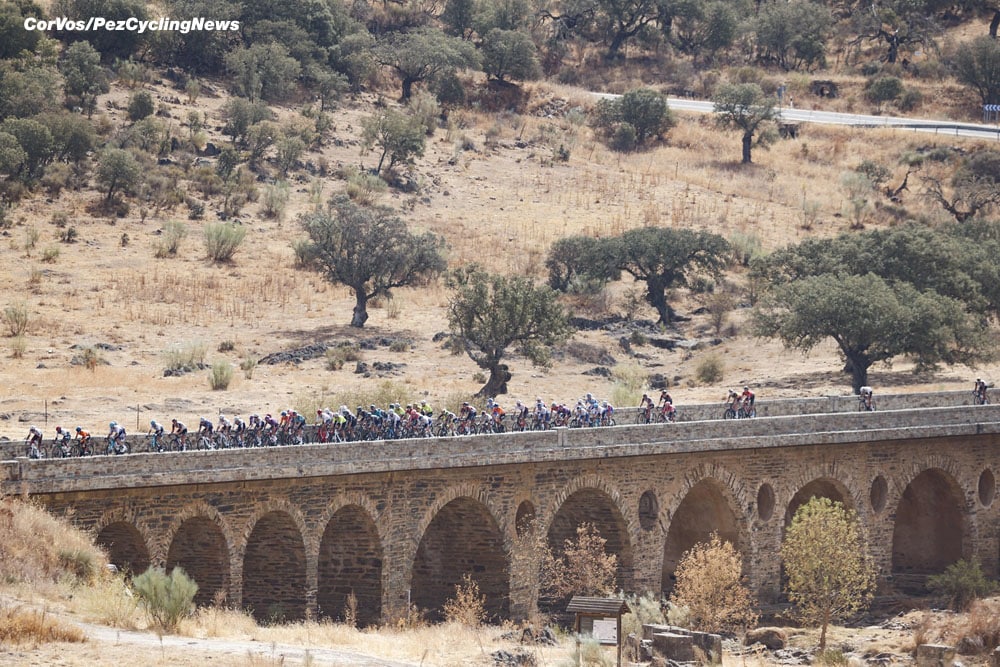 Not much flat on stage 18 and a Cat.2 and two Cat.1 climbs with a summit finish

Robert Gesink was the first to start the Alto de Piornal in the leading group. Almeida followed closely at 3:10 and the favourites group at 4 minutes. In the leading group, Hugh Carthy placed the first serious attack. He had Higuita and Pinot with him, while Gesink and Gesbert were stuck in a group with Carapaz. 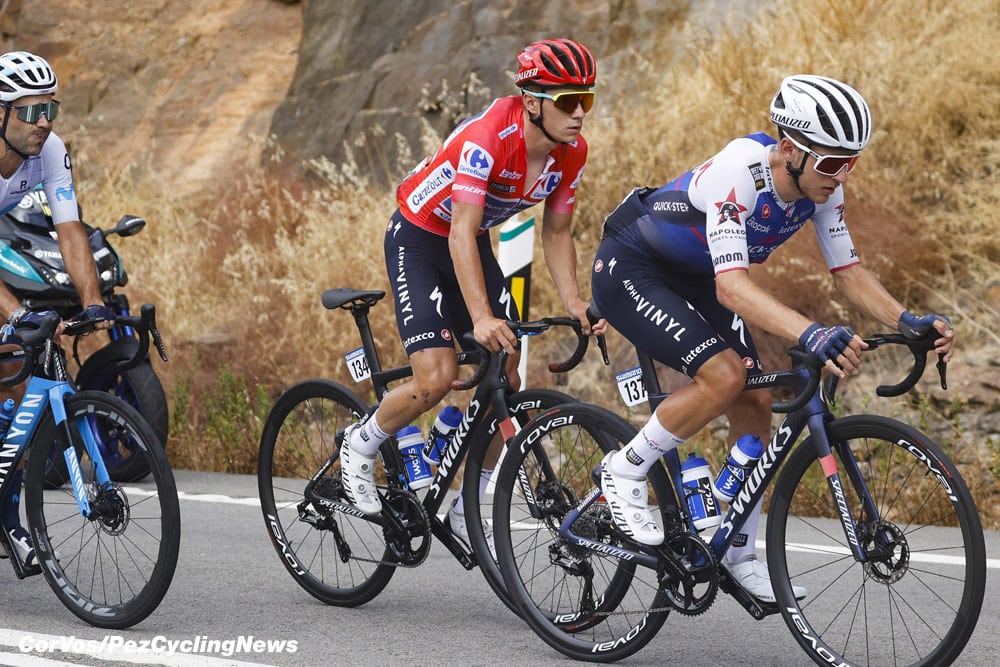 Evenepoel was well protected by his team

Under his leadership, the trio managed to join Carthy, Higuita and Pinot just before the top, after which Carapaz took another 10 KOM points. Behind; it was Almeida who single-handedly managed to get time on the favourites again. In addition, well before the top, he got support from Marc Soler, who had dropped back. The UAE climbers managed to join the remainder of the early leading group. 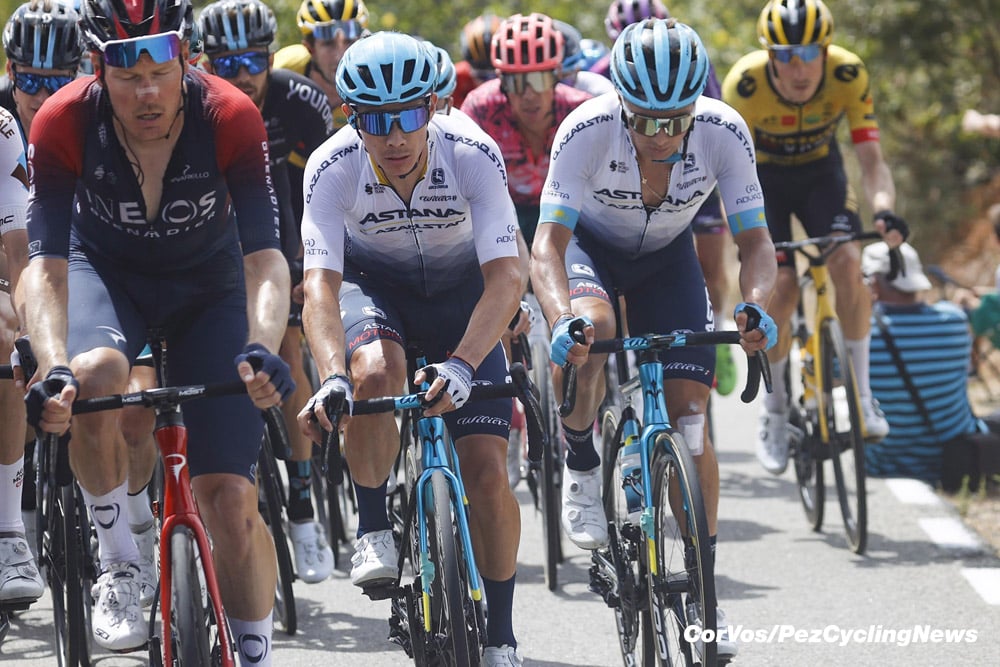 The favourites group, which rounded the top half a minute later, had thinned out considerably on the Alto de Piornal. This was partly due to an attack from López. Rodriguez was unable to follow at first, but he managed to return on the descent where the race split to pieces. 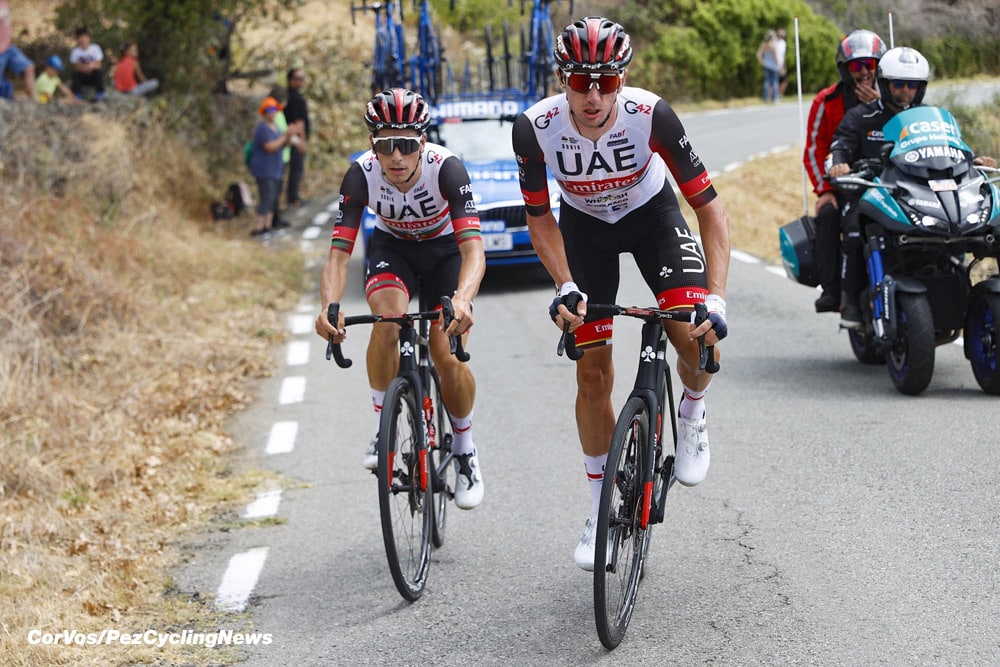 João Almeida wanted to do something today, with the help of Brandon McNulty

The group Almeida came within 1:30 of the six leaders, but the GC group almost got the group with Almeida in sight due to the hard work of Vincenzo Nibali and Movistar. So everyone was within 2 minutes of each other at the foot of the Alto de Piornal (13.4km at 5.6%). 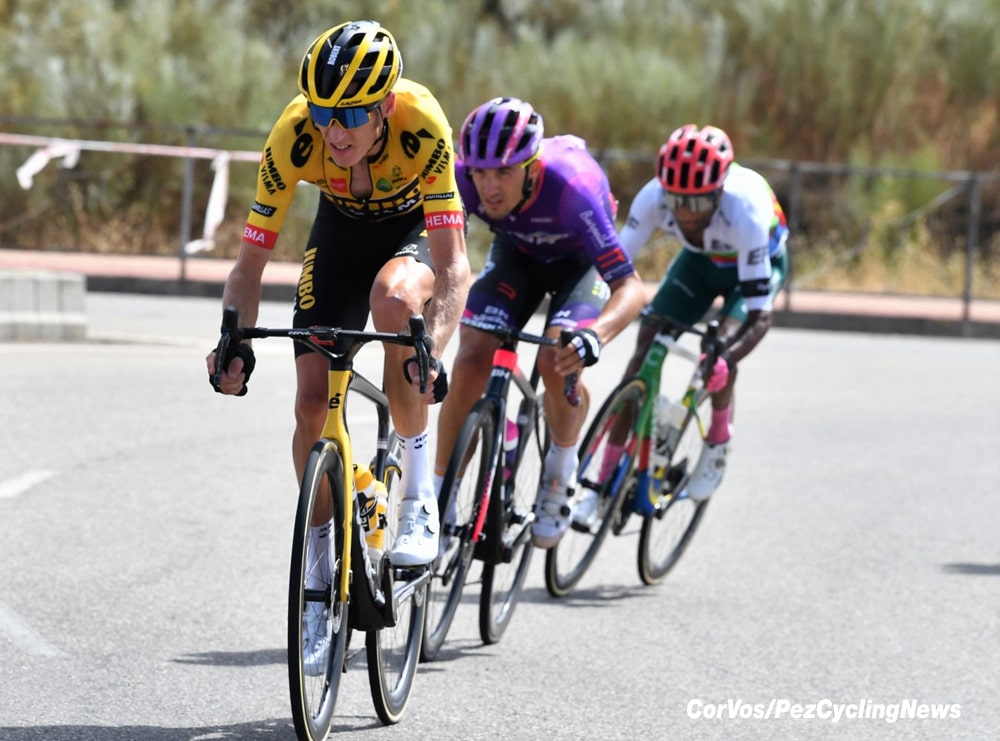 Robert Gesink was looking for a stage win, but…

For Ayuso, Rodriguez and López, the pace of the group with Evenepoel, Mas, Arensman and O’Connor was too fast. That group of the red jersey was chasing Gesink at 7 kilometres from the top. He had dropped Gesbert and had a good lead. Meanwhile, the dropped Ayuso, Rodriguez and López returned to the Evenepoel group with the help of Tao Geoghegan Hart. Mas decided to accelerate again with 5 kilometres to go, but Evenepoel was on his wheel. A second jump from Mas also had no effect, although this was the death blow for Rodriguez. Gesink’s lead went down little by little, but he started the last 3 kilometres with a 30 seconds lead.

Evenepoel also tried to make an attack himself, but it was not sharp enough to surprise Mas. Because the pace stopped several times, Gesink was able to consolidate his lead of more than 20 seconds when entering the last kilometre. A last effort by Mas ensured that Gesink was caught 500 meters from the finish. Only the Spaniard and Evenepoel managed to join Gesink, who did not give up and kept pushing. The sprint went to Evenepoel, who took his second stage victory of this Vuelta. Mas was second and a tired Gesink third. 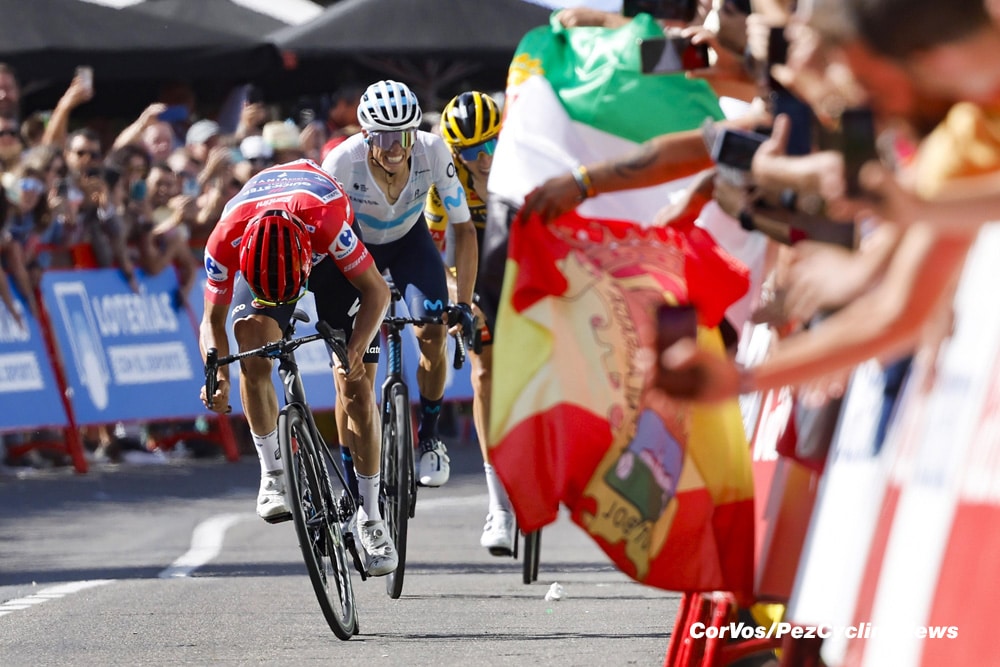 Remco Evenepoel was in full control of the stage

Stage winner, overall leader and Best Young Rider, Remco Evenepoel (Quick-Step Alpha Vinyl): “I think it’s a new achievement in my life. It was a pretty tough stage with really hard climbs in the finale, early attacks from UAE with Almeida… The race was really hard, but we always stayed calm. I think that’s what I learned, to always stay calm. It’s like in the last kilometre, we were still 15 or 20 seconds from Gesink and in the end we came to him at 300 metres and I went at 200, because I knew it was quite flat and in the winter I worked a lot on my sprint after big efforts, so it paid off. The goal is always to try and let the breakaway go, because like the bonifications are gone. In the end, Klaas [Lodewyck, DS for Quick Step] said that I was gone with Enric [Mas] so that’s the moment I told myself: ‘now you go for the stage win as well.’ Winning atop a mountain with the red jersey is amazing. Enric is a really fair play guy. In the end we worked together to go for the stage win. This was the most perfect day ever. Winning La Vuelta is still not done with a really hard stage to come. They will for sure attack me. But maybe now it’s easier to control because I feel my legs are really good. This is very good for me and for the team for the last three days.” 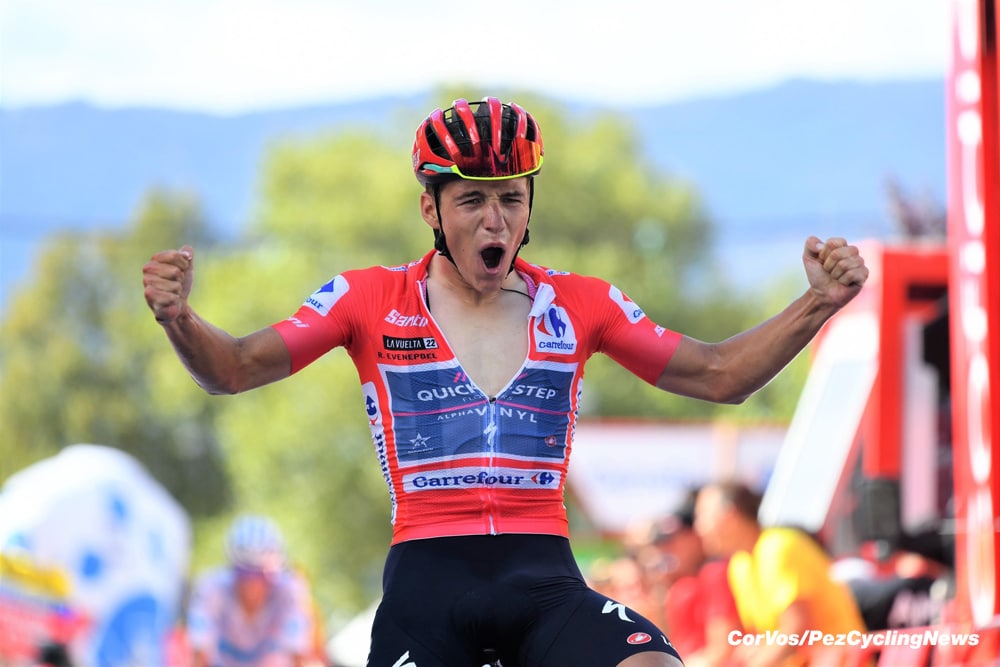 The win for the overall leader

What on earth is happening in this old photo?!?

Vuelta a Espana stage 13 Live – A hilly finish in Montilla