Vuelta Stage Report: Belgium’s Remco Evenepoel had no problems in the final stage 21 of the Vuelta a España to take his Vuelta crown in Madrid. The sprint for the stage win was a bit messy, but in the end Juan Sebastián Molano beat points leader Mads Pedersen and his UAE Team Emirates teammate Pascal Ackermann.

Remco Evenepoel has made history by winning the 2022 Vuelta a España. The 22-year-old Belgian of Quick-Step Alpha Vinyl received the overall winner’s trophy in Madrid. The final stage was surprisingly won by Juan Sebastián Molano of UAE Team Emirates. 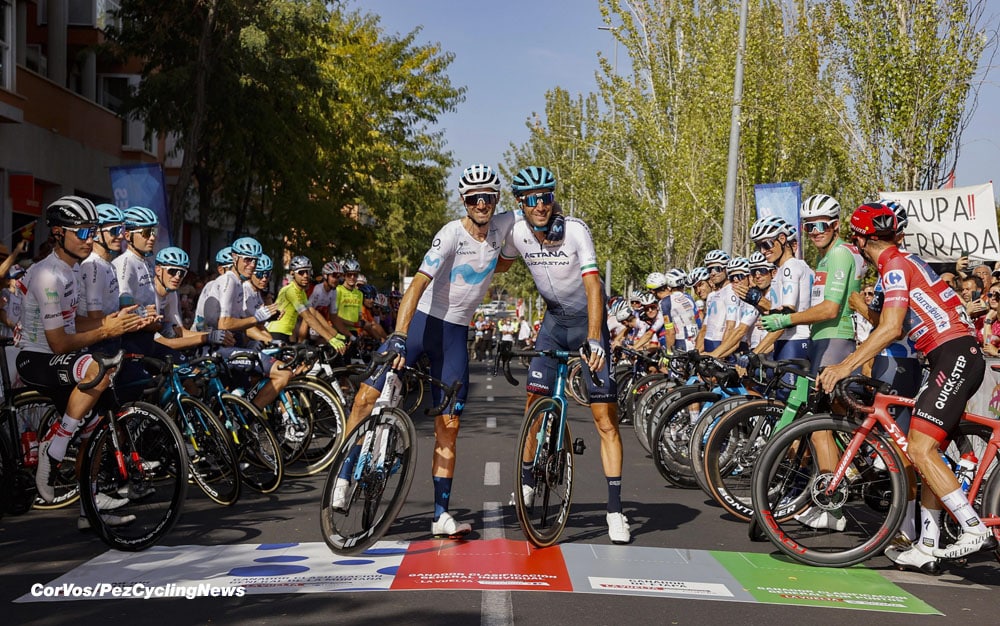 Race director, Fernando Escartín: “La Vuelta returns to Madrid. A well-known route through the capital’s main arteries, enjoyed by the peloton like a prize in itself. It is a day for smiles and celebrations. Sports-wise, a sprint to the finish-line is expected, where the winner of La Vuelta 22 will be crowned.” 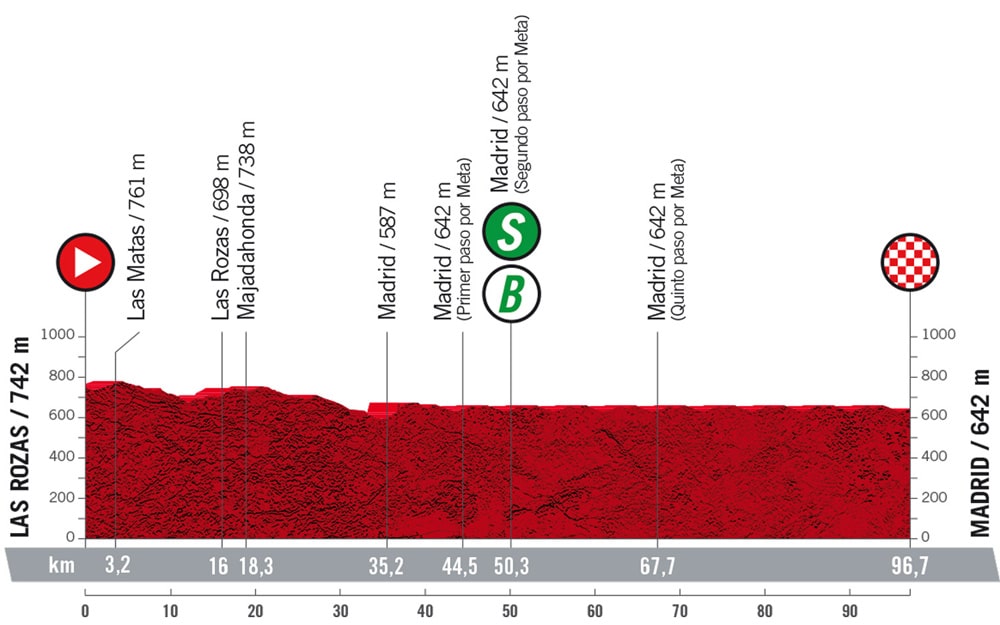 Before the start in Las Rozas, there was a tribute to Alejandro Valverde and Vincenzo Nibali, who are both retiring after this season. The Spaniard and the Italian were honoured before the start of their final stage in a Grand Tour. Then it was time for the famous final party stage. 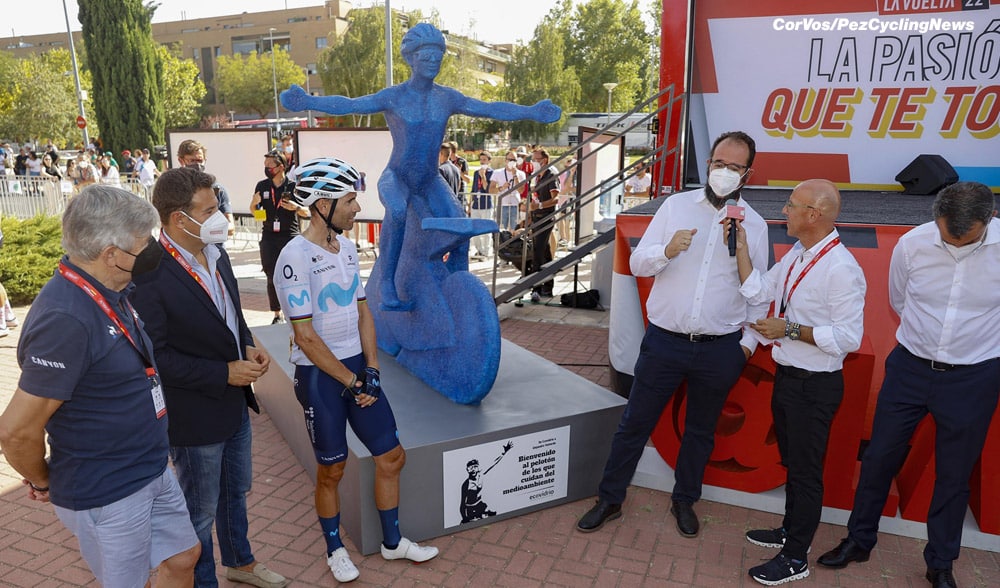 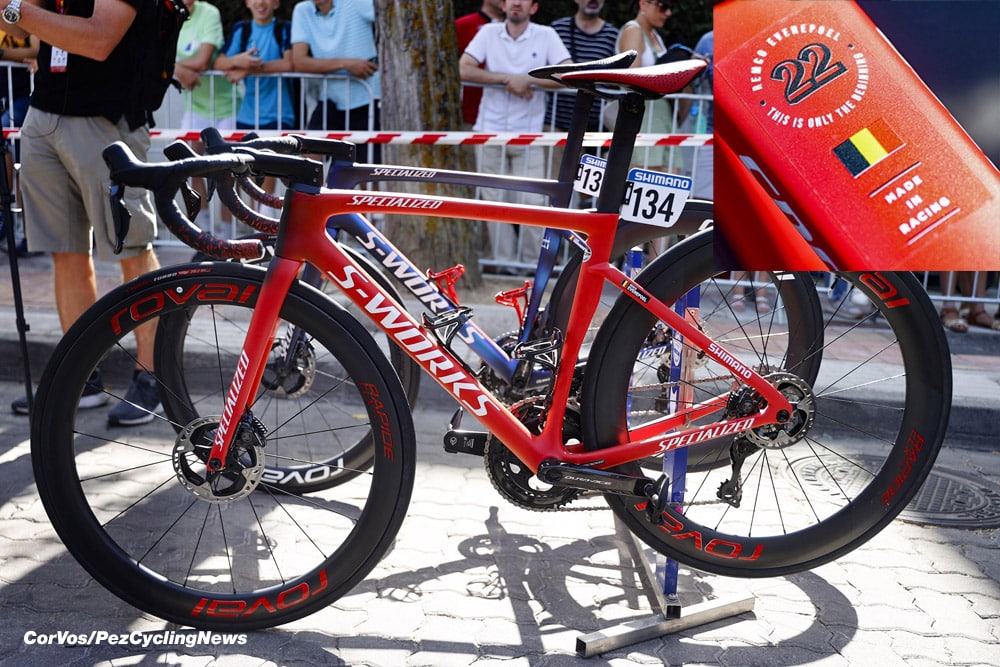 From the start of the stage there was chatting, laughing and photos to be taken. Rohan Dennis jokingly went on the attack, but he quickly dropped back into the bunch. Remco Evenepoel also tried to ‘escape’ but he was taken back by green jersey Mads Pedersen. 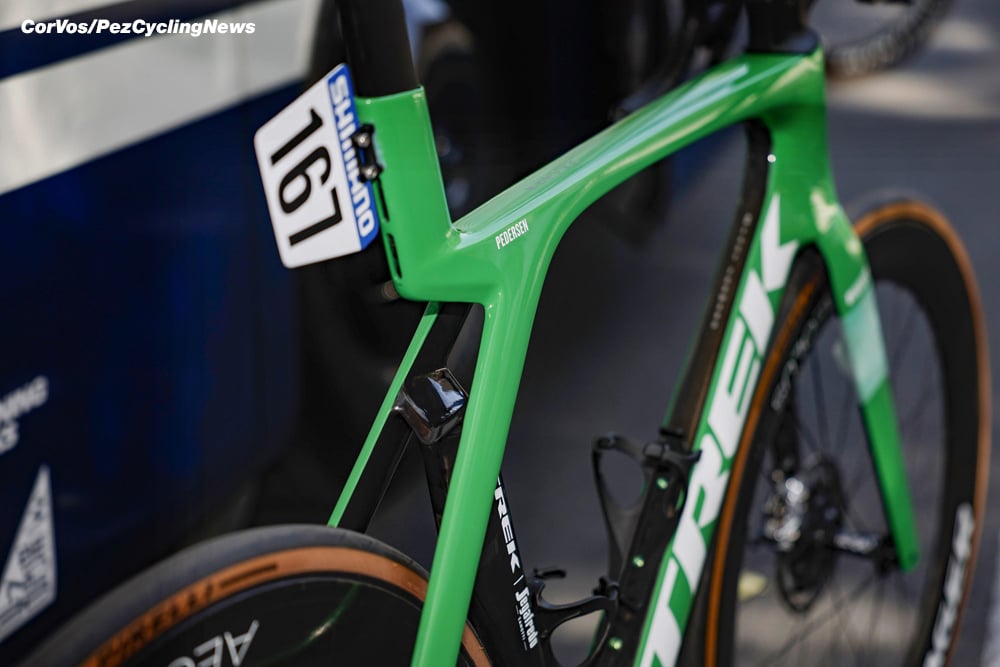 A green bike for Mads Pedersen 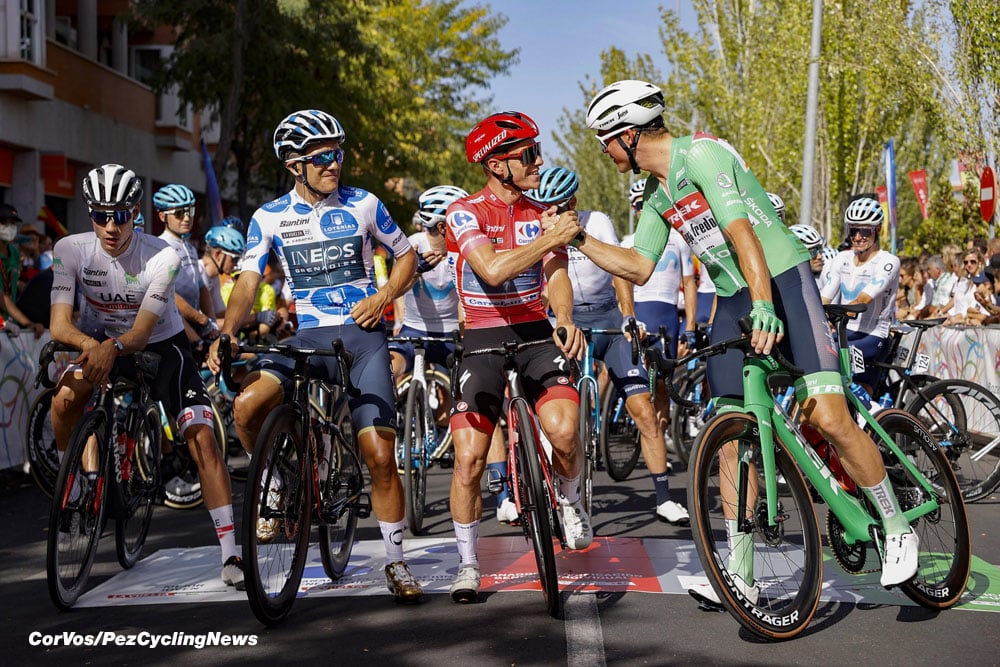 The leaders line up for the final stage

When entering Madrid, Alejandro Valverde had his own lap of honour, but after that the race was on and there was immediate attacks. At the only intermediate sprint, Carlos Rodriguez hoped to make up for his 1 second gap on Thymen Arensman, but that didn’t work as he lost the wheels of his teammates. Enric Mas surprisingly won the sprint and moved up to third place in the points classification, which wasgood for 20 much needed UCI points. 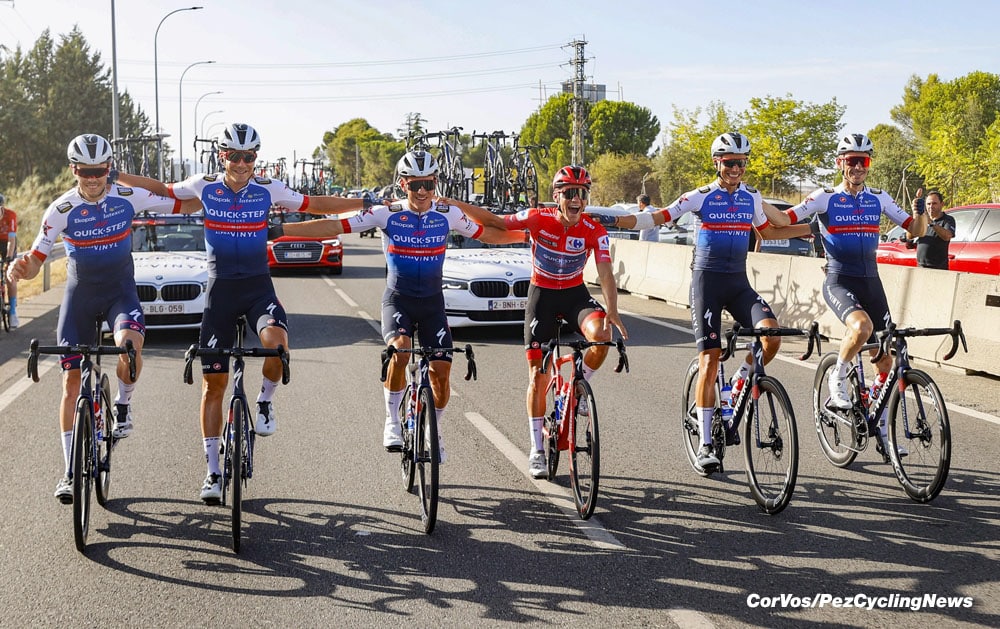 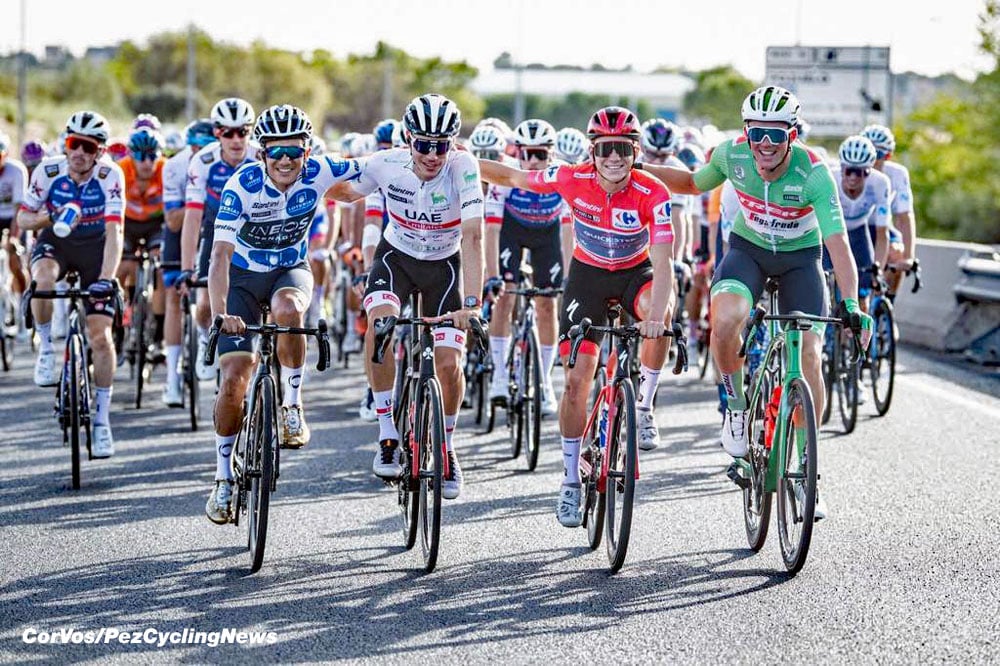 More photos for the jerseys 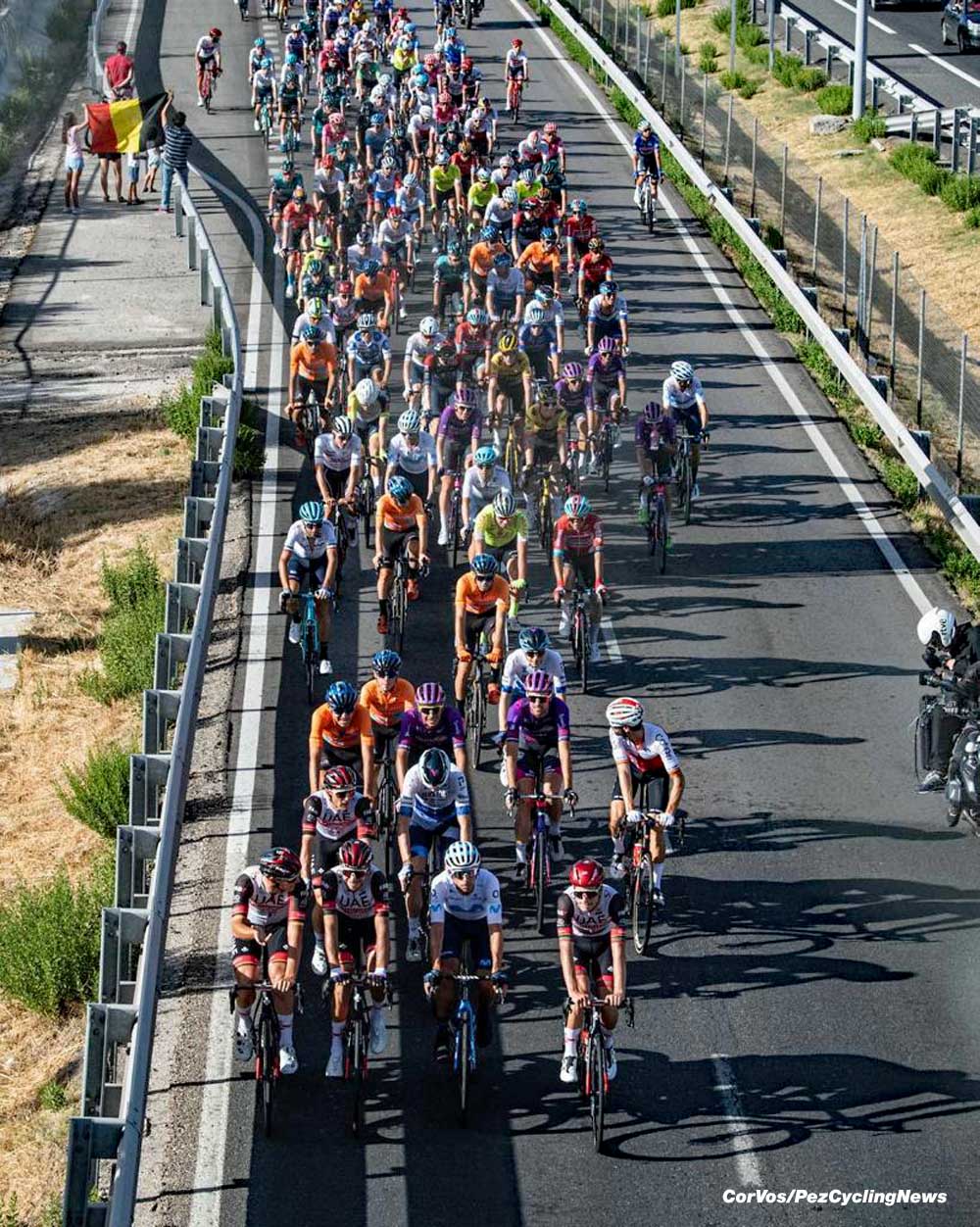 The stage eventually got under way 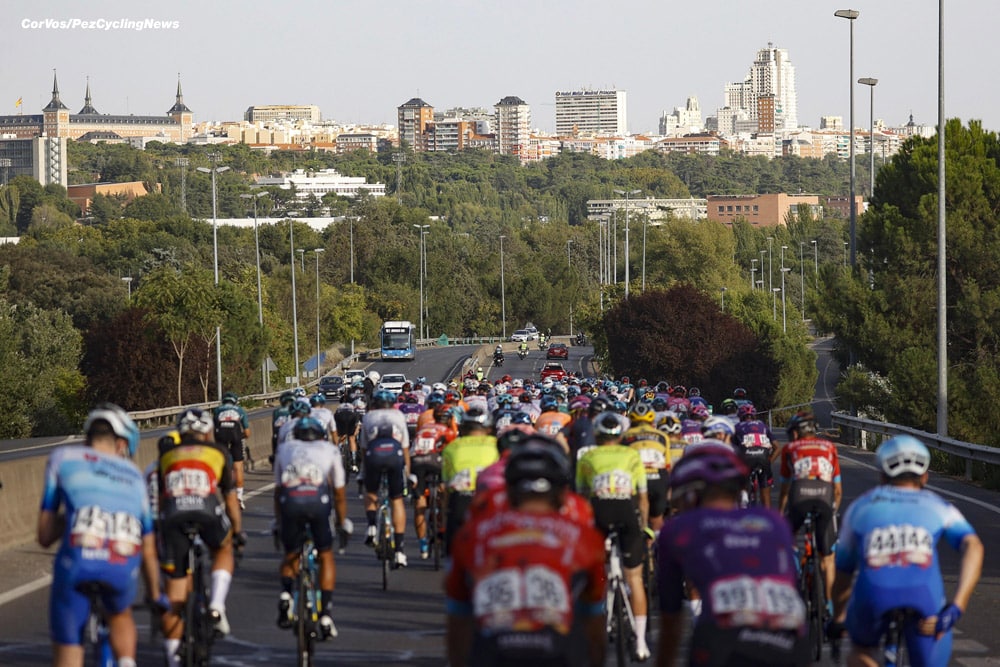 Madrid in the distance 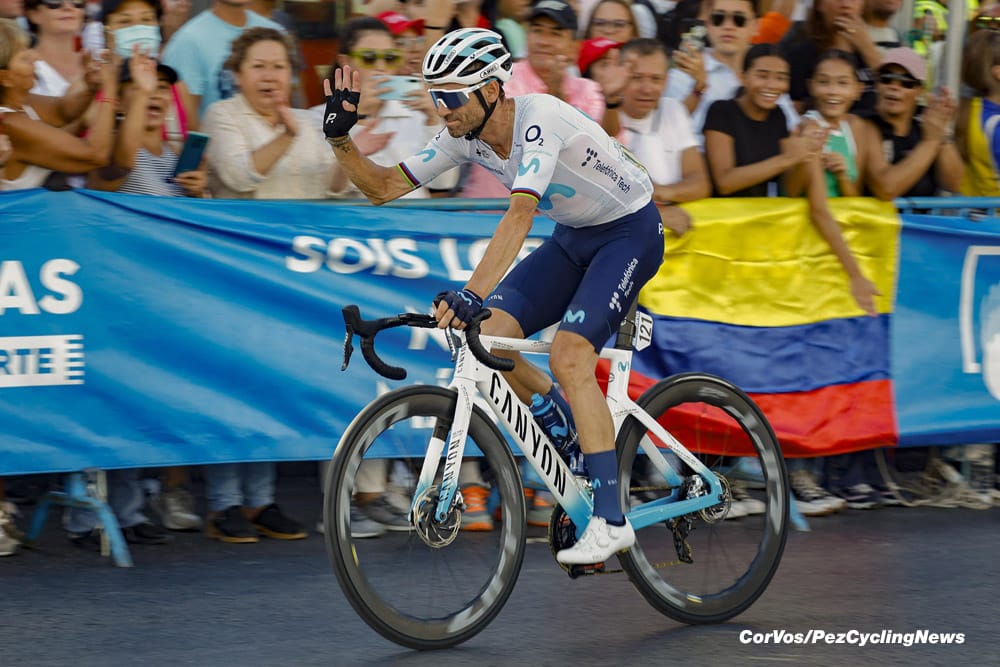 Valverde was the first onto the circuit 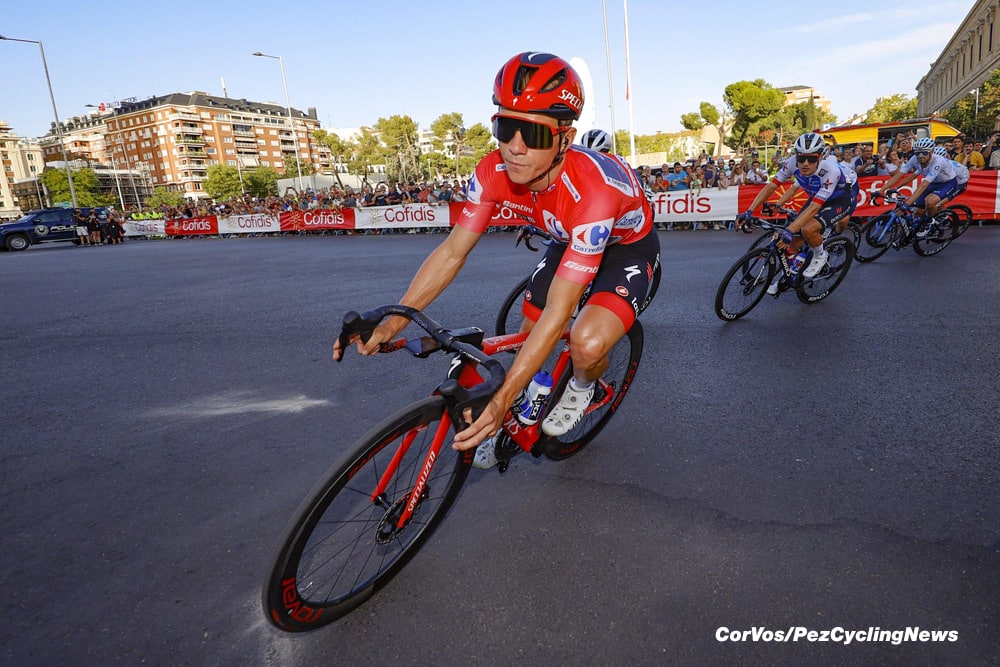 Evenepoel kept out of trouble 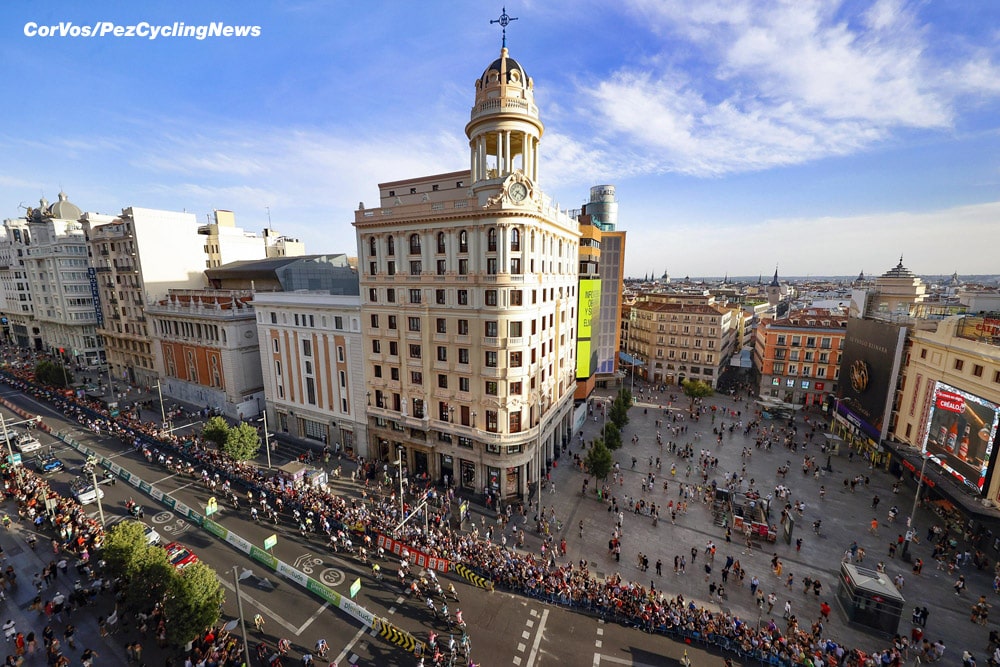 The race was on 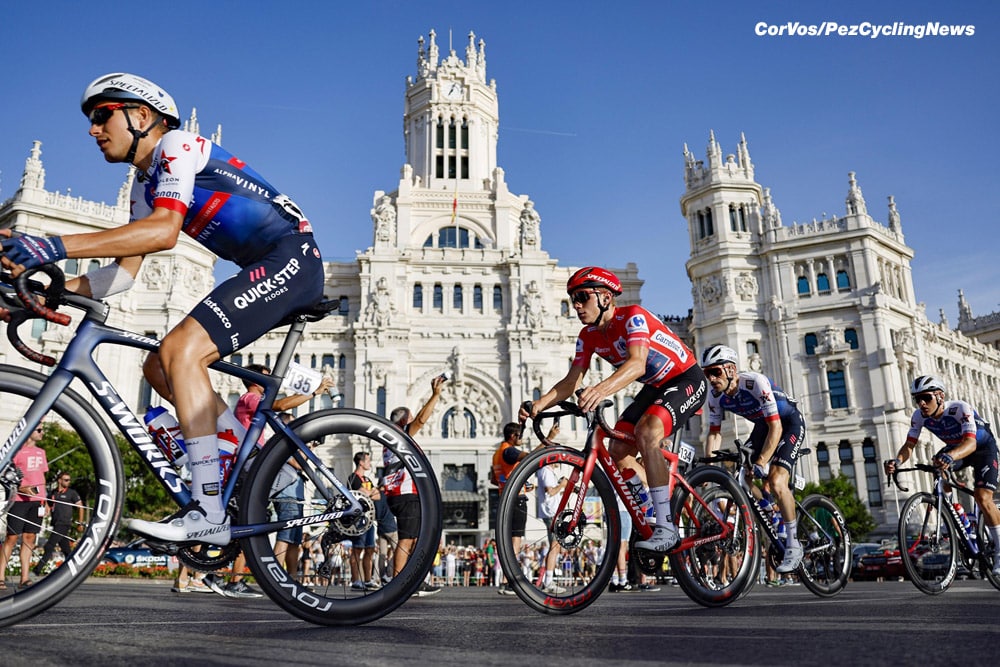 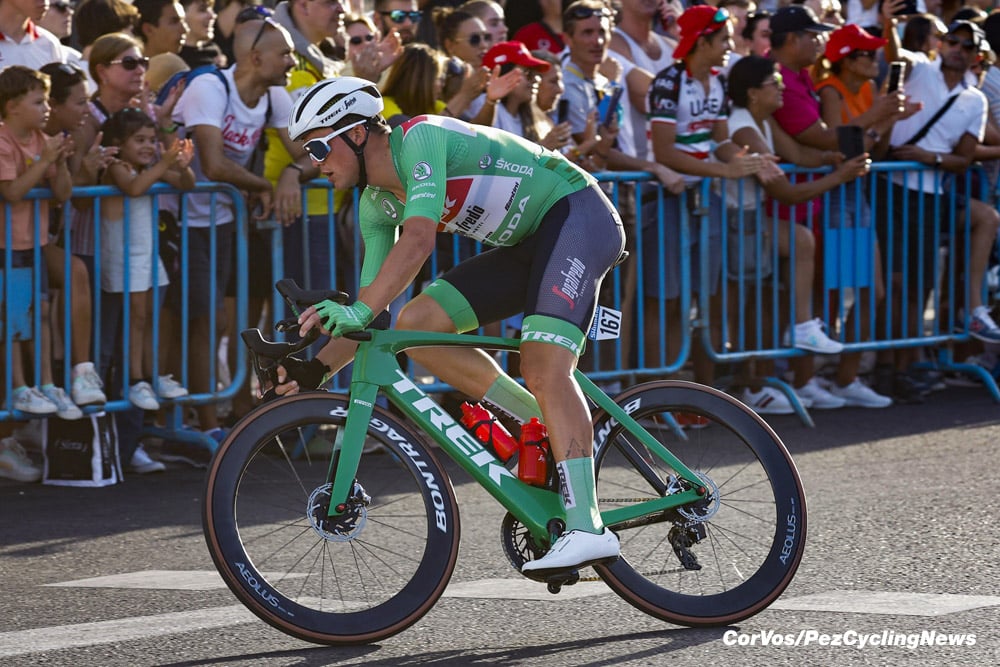 Could it be another stage win for the green jersey Pads Pedersen? 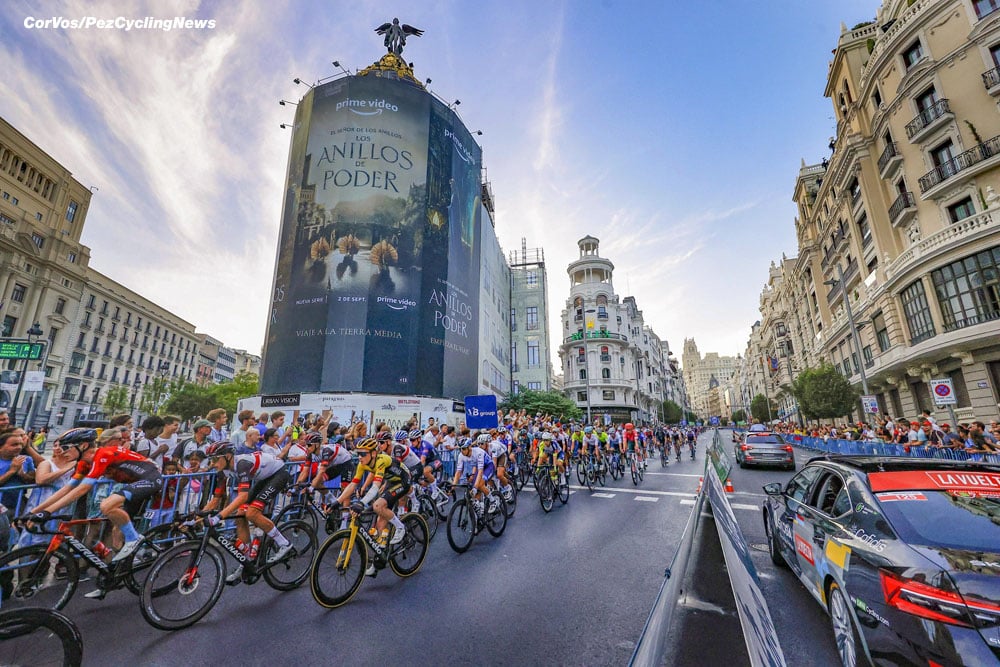 The speed lifted as the stage went on 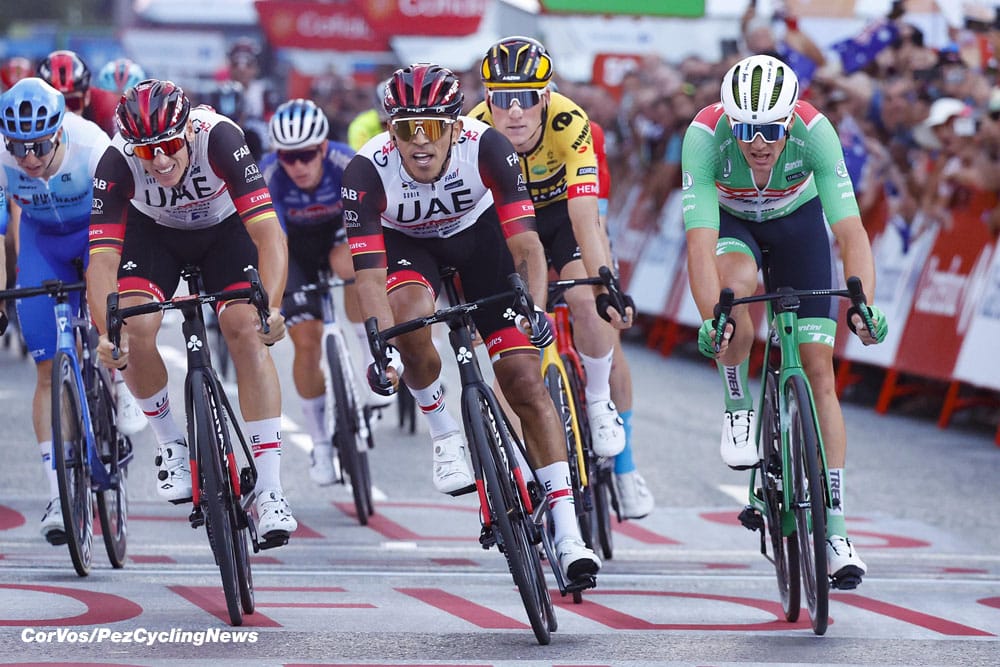 Stage win for Molano and UAE

Stage winner, Juan Sebastián Molano (UAE Team Emirates): “The truth is I’m still processing it. I knew I had to do a good job for Ackie [Pascal Ackermann], I had very good legs today and so did he. In the end, I launched with 300m to go, like I usually do in a lead-out. The team did a perfect job. I looked on the left and I saw Pedersen coming, and I never thought about stopping. I’m very happy and grateful to the team. I want to dedicate this victory to my mother, I love her so much, my brothers, all my family. I’m very moved. You can’t imagine such happiness. I think of everything I’ve done to get there, all the efforts we do fort his as athletes, cyclists, human beings, when we leave our families at home to go far away. I’m very happy and grateful.” 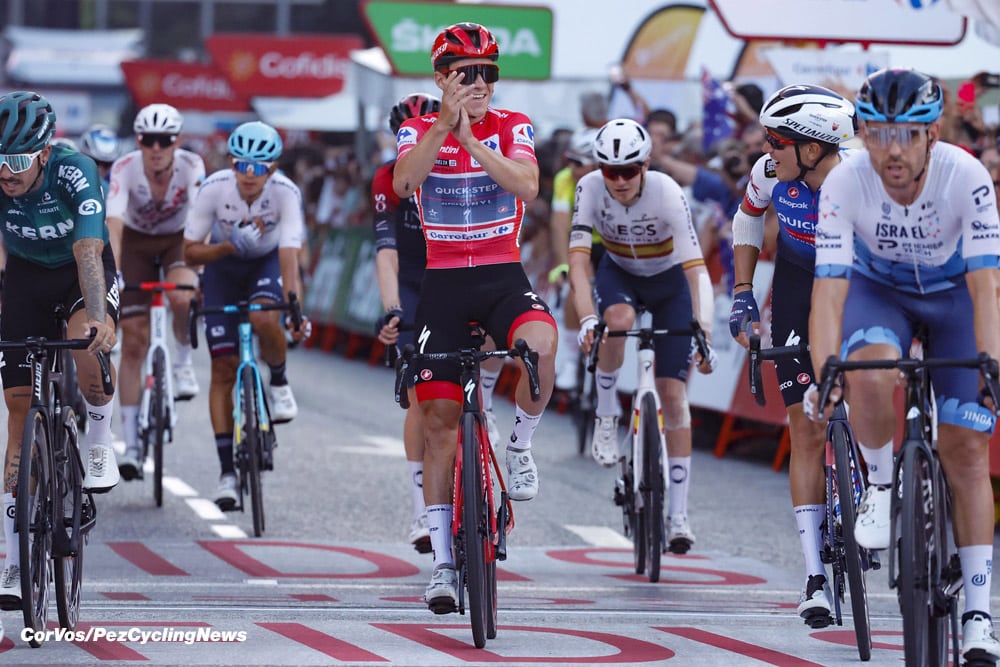 Evenepoel crosses the line in Madrid

Final overall winner and Best Young Rider, Remco Evenepoel (Quick-Step Alpha Vinyl): “Now it really sinks in, it’s really official. Already yesterday the emotions were quite high. We were actually there but we still had to finish the race safe and in a good way. I think we did perfect. We enjoyed as much as possible and now we can really enjoy. I didn’t have much time to think in Madrid because there it was a really technical course. It was getting more nervous every lap. I’m happy we survived here. It’s history for team, for my country, for myself. I think we can be really proud of what we did the last three weeks.”

# Stay PEZ for more from la Vuelta on Monday in EUROTRASH and the ‘Final Round Up’. #

The in-depth story of Remco Evenepoel the footballer, as told by teammates and coaches

EUROTRASH Monday: Remco and all the Other Cycling News with Video

EUROTRASH Monday: Remco and all the Other Cycling News with Video

Julian Alaphilippe crashes out of Vuelta a España