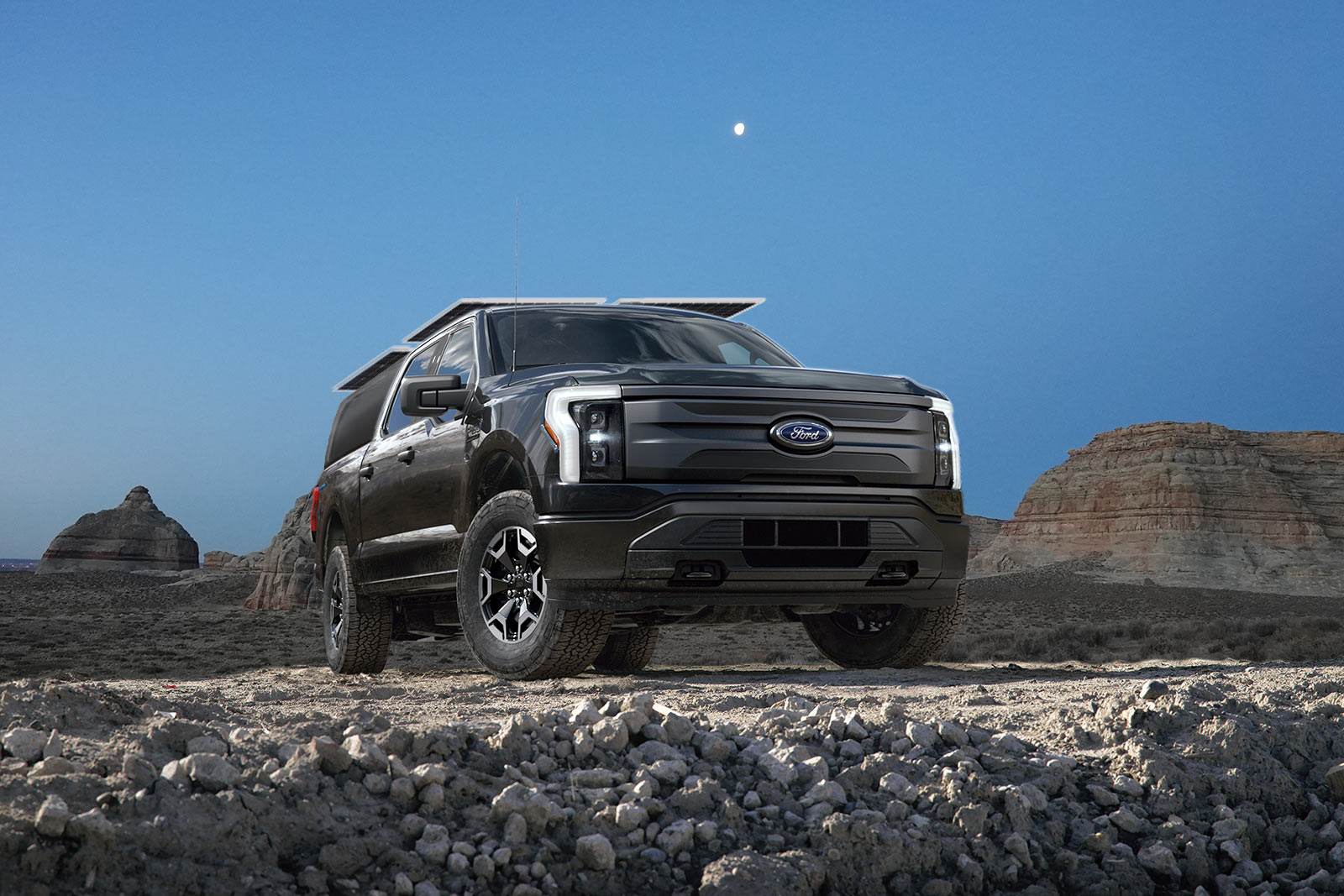 You’re not alone in eyeballing that new Ford F150 Lightning or Rivian R1T as a potential overland truck. Or the Ford Transit Electric as a custom camper van. How nice would it be to ditch the constraints of gasoline, not to mention the pollution and expense, and just escape off grid?

The trick, of course, is battery life. So, we wondered, is it possible to charge an electric vehicle off of solar panels?

The simple answer is, yes, you could charge an EV from onboard solar panels.

The real answer is, no, it’s not practical yet, because math. It would simply take too long to charge up your camper van or overland truck to the point where it could drive any useful distance. But why? What would it take? And how far off are we? Let’s find out…

Disclaimer: I am an amateur mathematician and electrician at best, but I had smarter people fact check this story, and for all practical purposes, it accurately explains the concept.

Let’s use the new F150 Lightning with the extended range battery as an example, and see what it takes to charge it up. This model includes Ford’s 80-amp charging station that gets hardwired into your home’s power grid and delivers 19.2kW to the vehicle’s onboard dual charging system. It will charge the vehicle 85% (from 15% to 100%) in 8 hours. One hour of charging would give you about 30 miles of additional range.

Here, we need a few numbers to put everything else into perspective. Ford doesn’t disclose the size of their extended range battery pack, but our back of the napkin math suggests about 180kWh. That’s almost 100kWh more than the extended pack for the Mach-E, which isn’t designed to carry large payloads.

Ford’s EVs all come with a standard 32-amp Mobile Charger that plugs into any 120V or 240V outlet, so you could charge it up at your friend’s house. Buuuut, on an upgraded 220-240V home outlet, that Mobile Charger is only putting out 7.68kW, and Ford estimates it would take 19 hours to go from 15% charge to 100% charge. One hour of charging at this level would net you about 13 miles of range.

If your friend doesn’t have a 240V outlet, or you haven’t installed one at your home, that charger is pulling from a standard U.S. 110-120V outlet, kW output drops to 3.84, but charge times will likely more than double. Those 19 hours become about 40 hours or more.

If it worked at all.

This is where it gets complicated. Even with the lowly 120V output, the Mobile Charger wants to pump out 3.84kW. You’ll see why this is a problem in a second.

Best case scenario is we have a quad-cab truck with topper and four 100W Renogy solar panels on board. They’re putting out 400W, running through a power control box to charge your accessory 12V battery bank. This is the typical setup for overland vehicles, RVs and camper vans with solar, so let’s use that for this example.

Those auxiliary batteries are standard 12V DC deep cycle batteries, though…not your EV’s main batteries. So to get their power to your EV’s Mobile Charger and then to your EV’s batteries, you need an inverter to convert to 110V DC in order to plug your charger in and then plug your vehicle in.

But let’s say you can, it still wouldn’t matter.

Assuming it even works at that minimal output, your 40 hours of charge time just went to 400+ hours. Your extra 2 miles of range per charge-hour dropped to 0.2 miles.

Considering it would take those same 400W solar panels about 2-4 hours of decent sun to fully charge one 200Ah 12V auxiliary battery, and that any attempt to charge your EV off that battery would suck it dry so fast as to be pointless, I won’t even do the math to sort that scenario out. But I used Renogy’s Solar Sizing Calculator to see what they’d recommend for a system:

So, just to power Ford’s Mobile Charger at the minimum level under ideal conditions, you’d want around 24,000W of solar panels and about 125 deep cycle 12V batteries.

Couldn’t I just hardwire the solar panels into my EV’s battery bank?

Wouldn’t that be nice? Maybe someday, but for now we don’t know of any EV brand that makes an adapter to go from solar directly into the car’s onboard charging system. That said, we hope someone’s working on a solution. Even so, as the math above shows, the gains from even a 1000W solar system would be trivial.

What about using a generator?

Bringing along a small generator would certainly charge your auxiliary batteries faster, and if it had a built-in inverter that you could plug your EV’s mobile charger into, then you’d gain some efficiencies. But, even assuming the generator pumps out reliable 110V power, you’re still looking at only gaining about 5 miles of range for every hour of charging.

And from an overall efficiency standard, that translates to probably about 5-10 miles per gallon of gas used by your generator…which is, honestly, on par with what many RVs and non-diesel camper vans get in the wild. Except that your vehicle is probably emitting far fewer pollutants than a generator. And less noise. And then you don’t have to bring a generator.

Yeah, it’s probably not going to work. Yet.

OK, but can I at least charge my e-bike with solar power?

Sure, but you’re still going to have to plug the e-bike’s charger into something, which means an inverter in your van or truck. And that inverter will be pulling from the battery bank that’s charged by your solar panels.

So, let’s use Bosch’s 4A standard charger as an example. Most camper vans and overland vehicles use 12V deep cycle AGM batteries, which typically have 100Ah capacity. That means you could get about 25 hours of charging (enough for about five full charges of Bosch’s Powertube 500 battery) from a single AGM battery…in a perfect world.

The problem is the inverter is inefficient, so you won’t get that many charges. And to charge a single AGM 100Ah battery, you’d need a decent amount of solar, and most vehicle’s roof top solar arrays aren’t going to keep up with that draw. So, you’re literally draining your battery bank faster than it can recharge.

So, yes, you can charge your bikes off your camper van’s auxiliary battery, but it’s going to dramatically cut down on what else you can do with that power.

So, while you can’t recharge your electric vehicle from roof top solar panels, we’d still definitely recommend adding solar to your camper van or truck, for reasons we’ll cover in future articles. In the meantime, listen to our deep dive into solar, batteries, and power systems for adventure vehicles in this podcast interview with VanDOit!